Established in 1996, the Doris Duke Charitable Foundation (DDCF) has become one of the USA’s representative charitable foundations with a large operating endowment. The originator of the foundation, the late Doris Duke (1912-93), was the only daughter of one of America’s richest men, James Buchanan Duke (1856-1925), who made his fortune in tobacco and electricity, and after her father’s death, she inherited a sum of $100 million (worth approx. one billion dollars today) at the age of 12. This made her immediately famous as the world’s richest little girl, and the eventful life she led after that was made the subject of a movie and is still treated today as the subject of documentaries for television and other media.

The mission of the Doris Duke Charitable Foundation is to improve the quality of people’s lives through grants supporting the performing arts, environmental conservation, medical research and the prevention of child maltreatment. Properties largely belonging to the Duke estate, including buildings and environmental and cultural assets are donated by the foundation for educational use. The foundation’s headquarters are in New York and decision-making responsibilities lie with a 10-member board of directors. As of the end of 2006, the Doris Duke Charitable Foundation operates on an endowment of 18 billion dollars donated by Doris Duke. The distribution of assets is evaluated and reviewed periodically based on fluctuations in economic and market factors to provide the best possible support to funded programs. Until now, some 696 grants have been made by the foundation to non-profit organizations to a total of $479 million.

1. Arts Program
Aims to support performing artists with the creation and public performance of their work, as well as support for network-building activities in the same field.

2. Environment Program
Aims to preserve wildlife in the United States, both flora and fauna.

3. Medical Research Program
The foundation supports clinical research and activities for the prevention, treatment and cure of diseases.

4. Child Abuse Prevention Program
Aims to protect children from abuse and neglect in order to promote their healthy development.

Shangri La in Hawaii
A large collection of Islamic art is open to the public.
http://www.shangrilahawaii.org

Among the foundation’s various grant programs, the Arts Program focuses mainly on support performing artists with the creation and public performance of their work, as well as support for network-building activities in the same field.

The initiatives provide long-term support for performing artists in contemporary dance, jazz and theater and the professional nonprofit arts organizations that nurture, produce and present them. What differentiates the Doris Duke Charitable Foundation from other private foundations in the U.S. is its focus on the performing arts. It does not give grants for fine arts, literature, orchestra, opera and classical music and ballet, or to galleries and museums.

During her lifetime, Doris Duke was a lifelong patron of the performing arts and had a strong desire to support “actors, dancers, singers, musicians and other artists of the entertainment world in fulfilling their ambitions and providing opportunities for the public presentation of their arts and talents.”

In February of 2007 a review of the Arts Program was completed and a set of three new guidelines were set for the next five years, specifying that support would be given to organizations and artists that meet the following three types.

As of December 31, 2006, the foundation’s Arts Program has approved approximately 121 grants totaling about $156 million. Among the organizations receiving support from the foundation are the National Performance Network (NPN) that promotes exchange between contemporary dance companies nationwide, and the Japan Society, which is now conducting a performing arts series as part of its 100th anniversary events. 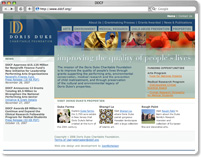