Korea Arts Management Service was established in January 2006 as a marriage of three previously existing organizations under the umbrella of the Arts Policy Team at Arts Bureau of the Ministry of Culture and Tourism, the Evaluation & Consulting Center for Certified Arts Organization, Asia Artplex and the Administrative office of Performing Arts Market in Seoul (PAMS) launched in 2005. The organization operates in the three areas of support through its Planning Support Team, a International Exchange Programs Team and the Department of R&D, Consulting for arts projects, overseas projects and research and development consulting to support overseas activities and exchange by Korean performing arts companies, consulting for domestic arts organizations and evaluations for government grants, etc.

The first chairman of the organization is Lee Gyu Seog .

Main operations, activities
Department of Planning and Administration
Department of Planning and Administration has taken over the work of the former Arts Policy Team at Arts Bureau of the Ministry of Culture and Tourism in certifying non-profit organization status for specialized arts organizations and evaluating government grant proposals. It also provides arts organizations consulting and support in the fields of, human resources, public relations, information supply for strategy planning and training programs.

Department of International Exchange
The Department of International Exchange provides services to promote overseas activities by Korean performing arts companies and international exchange. These activities are divided roughly into Inbound and Outbound programs. The inbound side centers on planning and operation of the Performing Arts Market in Seoul (PAMS) from 2006 as a platform for introducing Korean arts companies to foreign presenters. The Outbound side involves participation in overseas arts markets and festivals to promote Korean arts companies as widely as possible on the international scene. In August 2007, a large-scale showcase titled “Korea@Fringe” was organized at the Edinburgh Fringe Festival introducing Korean contemporary performing arts at numerous venues around Edinburgh over the course of one month. Also, the 3rd Performing Arts Market in Seoul is being held from Oct. 9 to 14.

Department of R&D, Consulting
This department engages in research and information compilation and supply of information to regional domestic performing arts organizations in the form of analyses of the management structures of arts companies and consultancy in the fields of career development of arts managers and evaluation for subsidized arts events.

The Asia Artplex Team that was formed at the time of the organization’s launch is now integrated with the Department of International Exchange. The Artplex concept is part of the of the “Central Cultural City Creation” programs that were begun during the previous presidency of Kim Dae Jung in 2003 with the passing of a special bill to form an action group under the direct supervision of the President. Under this program city of Kyongju was designated as the Culture Center for the traditional arts of Kyongsangbukto province, Chonju the Culture Center for the traditional arts of Chollabukto province, Taegu was designated the “Fashion Design City, ” Pusan was designated the Culture Center for film and video arts and Gwangju was designated the Asian Culture Center. These programs have already been established and are functioning and now KAMS is working on plans call for the opening of a new Asian Culture Complex in Gwangju in the year 2010 and the general systematization of the Asian Artplex operations. 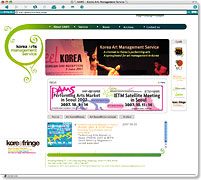