Founded in September of 1985, Arion-Edo Foundation is dedicated to promoting and elevating the musical arts of Japan by offering prizes and grants for young musicians and organizing various types of concerts and events aimed at expanding the music audience at a high level. There were few classical music festivals in Japan like those of the West at the time when pianist and current President of the Arion-Edo Foundation, Kyoko Edo, and two other musicians proposed the founding of this organization and at the same time organized the 1st “Tokyo Summer Festival.” Since then, the festival has been held every year in cooperation with the Asahi Shimbun in concert venues around Tokyo.

The Foundation’s main activities are as follows:

1. Award and support young promising musicians
The foundation’s “Arion Award” and “Minao Shibata Award” were established to recognize and promote the activities of young musicians. The recipients of the award\'s prize money are newcomers to the field (performers, composers, or academics; individuals or groups) whose activity demonstrates great promise for the future.
Grants are also offered for the purpose of supporting musical activities from a long-term perspective by providing opportunities for performances and overseas study.

2. Organize and sponsor music festival
Organizing the “Tokyo Summer Festival” each year since 1985 as a music arts festival with a unique theme each year aimed at offering a wide range of music. This festival invites domestic and international artists to perform in various venues around Tokyo over a period of approximately three weeks. Themed “Towards the Islands - Sounds across the Sea,” the 23rd Tokyo Summer Festival 2007 featured a total 21 performances of twelve different programs.
Invited artists for the 2007 festival included musicians from island nations around the world offering a wide variety of musical experiences, including Icelandic composer Johann Johannsson, Caribbean Vodou ritual music from the island of Haiti, “Taarab” popular music from the African island of Zanzibar and music from the Japanese islands of Aogashima and Hachijojima. There were also performances by musicians applying independently to open solicitation.

3. Organize and sponsor concerts and lectures regarding music and undertake other projects necessary to achieve the purpose of the Foundation
Planning an organization of concerts is undertaken for The Phoenix Hall in Osaka (opened 1995) and the where President Edo serves as artistic director, and the Amber Hall in Kuji, Iwate Prefecture (opened 1999). Planning and production of special anniversary events at various halls and educational programs are also undertaken on commission. 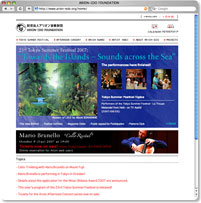