Since it became an independent country in 1965, Singapore has undertaken national efforts to build the economy, trade, basic social infrastructure, education and housing. With the improvement of the standard of living and economic development in the later half of the 1980s the country began turn to the questions of developing culture and leisure as parts of the citizen’s lifestyles to match the increasing material wealth of country. The government’s Report of the Advisory Council on Culture and the Arts published in 1987, an advisory committee was formed with the Deputy Prime Minister as its chairman and a survey was conducted to determine the demands and desires of the populace with regard policies for programs and needs concerning the arts for making Singapore a city rich in arts and cultural activity. Based on that survey, a proposal was made for a National Arts Council to be established and proposals were also made for the construction of the grand-scale Esplanade arts and culture facility. Also, a La Salle polytechnic institution was proposed as an educational institution to nurture artists and a new art museum proposal was included as well. As a result, the Singapore National Arts Council was established in 1991 with the mission of making Singapore a “unique and global arts city.”

In the fields of music, film, performing arts, publishing, new media technology, the National Arts Council (NAC) is involved in the support and nurturing of domestic artists, collaborations, cross-cultural collaboration, collaborations between different genre such as dance and theater or dance and multimedia and various support and grant programs such as cooperation with foreign countries through its relationships with arts and culture facilities, presenters, arts organizations and tie-ups with public schools.

The NCA has the following five policies concerning its activities.
-Nurture and Develop the Arts
-Develop Capabilities and Resources
-Stimulate Broader and More Sophisticated Demand for the Arts
-Facilitate Internationalization and Enhance Global Connectivity
-Advocate the Importance of the Arts

One of the programs born of these policies that has produced good results in recent years is the Arts Housing Program. Numerous historical buildings in the Little India, Chinatown and Waterloo Street areas have been made available as creative studio and performance spaces. The National Arts Council pays 90% of the rent and maintenance fees for these facilities in order to support the creative activities of artists and give them places to work.

The NCA also provides investment capital and support for domestic private-sector companies starting businesses in the arts field and cooperates with these organizations in holding arts festivals and events. In particular, events like the Singapore Art Show, with its great influence in the art scene, the Singapore Biennale, the Singapore Arts Festival and the Singapore Writers\' Festival have become important platforms for the dissemination of information on the contemporary Asian arts scene and opportunities for many talented artists to meet. In this capacity they have also drawn the attention of international presenters.

Also, the “Renaissance City” report published by the government at the 10th anniversary of the National Arts Council founding and reflecting the changes in domestic conditions designated a budget allotment of more than 50 million Singapore dollars for arts and culture programs. The NAC has been given the major role in managing this budget for purposes of nurturing arts companies, support of creative activities and participation of domestic artists in international projects, etc. This has helped create a stable support system for artists to live and work on, and this fact has brought a new period of change and development for the Singapore arts market.

The NAC also manages three theaters and arts facilities of various sizes in the Victoria Theatre, the Drama Centre, etc., that provide facilities for local artists to engage in self-supporting activities. 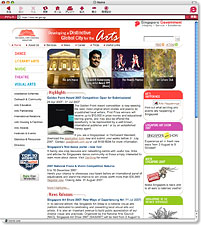