he Hellenic Culture Organization was established in 2000. At the time of its founding its primary activities were the planning and operation of a 4-year “Cultural Olympiad” program beginning in 2001 and culminating with concurrent events with the Summer Olympics in Athens in 2004. The program involved a variety of other cultural events ranging from music, theater, dance, performance and opera concerts in the performing arts to exhibitions, films and literature events and effectively creating an Olympic scale event to accompany with the sports Olympiad. From Japan a well-received production of the Greek tragedy Oedipus Rex directed by Yukio Ninagawa and starring Mansai Nomura and Rei Asami was performed in July of that year as an official Cultural Olympiad invited production at the Acropolis Theatre of Herodes Atticus.

After the conclusion of the 2004 Cultural Olympiad the Hellenic Culture Organization has shifted the orientation of its activities toward the international promotion of contemporary Greek culture and arts and has now programs in a wide range of fields. The following are some of its main activities.

1. Cultural Activities
In addition to the obvious needs of preserving and developing Greece’s abundant cultural assets, the organization is also focusing efforts on the promotion of the country’s contemporary arts. Especially in the area of performing arts, they organized a first Balkan Performing Arts Market for contemporary performing arts of the 12 Balkan region nations in June of 2006. The 12 Balkan nations are Albania, Bosnia Herzegovina, Bulgaria, Croatia, Cyprus, Macedonia, the former Yugoslavia, Moldavia, Romania, Serbia Montenegro, Slovenia, Turkey and Greece. The Market featured some 170 showcases and performance and 200 booths of contemporary arts from the region and conferences attended by some 3,000 people. It has been decided to continue this event on a biennial basis, with the next event scheduled for May, 2008.

The organization’s relations with Japan began with the Japan-EU program “On the Modern and the Contemporary in European and Japanese Culture” in November to December of 2006 featuring recitals of Greek music, seminars, an exhibition on Greek architecture, a photography exhibition and video showings. Policies for the future in the area of international programs include concerted efforts to build a network with the countries of Asia and preparations are now underway to expand a biannual grant program for domestic artists.
2. Digital Technology Activities
Under the Greek government’s “Information Society” strategy, the organization also operates the Greece Culture Guide website ( http://www.cultureguide.gr ) as an Internet media portal providing a digital archive, DVDs and CD-ROMs and online ticket sales, etc., for the many artists, researchers and tourists interested in Greece’s cultural heritage.
3. Developmental Activities
The Hellenic Culture Organization operates museum shops at tourist sites and an online shop The Museums Shop ( http://www.museumshop.gr/index_en.html ) promoting sales of photographs, CD-ROMs, catalogues replicas and stationary, etc., with images of Greece’s cultural heritage. It is also developing new products related to these cultural assets like educational materials and replicas. 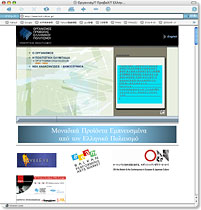