International Society for Performing Arts (ISPA) is a non-profit membership organization established in 1949 for the purpose of creating a network for professionals in the performing arts field from the various countries.

By keeping a watch on the performing arts environment from a broad perspective, employing international networking and training leaders, the Society seeks to establish an important role for the performing arts in society. Present membership in the Society totals about 600 individuals and organizations representing theaters/halls, arts companies, artist managers, government agencies and producers from some 50 countries.

ISPA holds two international conferences a year for all its members, with one in January at the Society’s headquarters in New York and the second in June at rotating venues in one of the member countries. Its other activities include operating a website and publishing a newsletter for its members.

In addition to artist video presentations, booth presentations and showcases primarily featuring artists from the host country’s region, the Society also presents the ISPA Awards Ceremony to recognize career achievements of distinguished artists, as well as organizing seminars and workshops.

These regional conferences have been held until now in major European cities like London and Amsterdam and Asian venues have included Singapore and Hong Kong. The host countries are chosen by the Society’s board members based on its Congress Host Guidelines. ( http://www.ispa.org/resources/host_guidelines.html )

The 2007 ISPA international conferences will be held in New York from January 16 to 18 and in Brussels, Belgium, from June 8 to 11. The coming 59th New York conference takes “Fluidity” as its theme. The guest curator will be Robyn Archer and applications are now being accepted from artists and companies to present works rich in fluidity. Participant applications can also be made on the website, International Society for Performing Arts (ISPA) http://www.ispa.org/index.html . 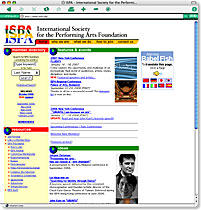