The Arts Council of Mongolia was founded in 2002 by leaders of the economic world, government agencies and cultural figures for the purpose of supporting Mongolia’s artists and cultural activities and raising international awareness of the arts and culture of Mongolian abroad.

Amidst the socio-political reform that began after the democracy movement of 1990, budgets were cut for funds supporting artists and the planning and implementing of activities by arts and culture organizations. The reasons for the establishment of ACM were this decrease in funding for the arts and culture and the fact that Mongolia had no tax incentives to encourage private-sector contribution to the arts, and these factors were causing a serious obstacle to the development of the arts and the preservation of the country’s traditional arts and culture.

By 2005, three years after its establishment, ACM has become a strong support organization for the arts. Among its achievements in 2004 were 60 projects supporting artists and other presenters of arts and culture activities and 17 projects initiated for the support of cultural activities. In 2004, ACM procured funds equivalent to $95,000, and materials worth over $20,000. In 2005 those total rose to $139,326 in funds and $28,512 in materials.

Program contents
Art Education Program
The program “My history – My culture” launched in February 2006 introduced traditional Mongolian culture to the young generation. In the “Rainbow Horse Festival” held to celebrate the 800th anniversary of the founding of the Mongol nation, artists created 88 different sculpture images of horses that were then decorated by children from all over Mongolia for display in the August 2006 festival. The “Feel Wind: Modern Dance Training” program held in August 2006, an American dance teacher from the US was invited to hold a 2-week workshop to teach young dancers. The “Focus on Kids” photography project offered children with disabilities an opportunity for self-expression and their works were displayed in a June 2006 exhibition. The “Big Day Out” program reached out to young people with a rare opportunity to opera and ballet performances. The first performance under this project was an opera performance held on May 26, 2006.

Grants Program
Since 2003, applications for grants have been accepted once a year in group and individual artist categories. In the group category, grants for the support of arts and cultural projects are granted in amounts of $1,000 to $1,500 depending on contents. In the individual category, grants of $300 to $3,000 are given to artists or agents involved in international activities. In 2005, grants were given to 24 groups and 23 individuals to a total of $58,988. Past recipient groups include the Roaring Hooves Music Festival and the Golden Eagle Festival, while individual recipients include the painters M. Erdenbyar and Ts. Enkhargal.

Advocacy Program
Activities include the establishment of the “Arts Forum” think tank made up of specialists from the government and the public and private sectors, participation in the Ministry of Education, Culture and Science organized Culture Fund Conference and running a monthly full-page newspaper article called the “Mongol Messenger.”

Cultural Heritage Program
The “My Culture” program is an ongoing project conducted in cooperation with the Khovd Music and Drama Theater to train children in the unique folk music of the Khovd region with the aim of preserving this traditional music form. The creation of the first stage training program in November 2005 and the second stage will involve the training of instructors and preparing practice facilities. Plans called for the start of children raining in September of 2006. 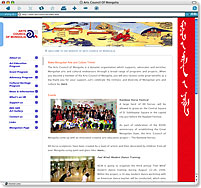