Germany’s The House of World Cultures (HKW) is an organization that specializes in foreign cultural exchange and implementing the government’s foreign policy in the field of arts and culture. It was founded in 1989 in Berlin through an act of the Berlin state government and the FDP, Germany’s national parliament. Contrary to the Goethe Institute International (GIIN), which specializes in the introduction and promotion of German culture in other countries, The House of World Cultures is dedicated to introducing a wide range of culture from non-European countries in Germany and promoting networking between Germany and the various regions of the world in the arts and cultural fields.

Located in the center of Germany’s cultural capital, Berlin, and having galleries, theaters and conference facilities, HKW introduces dance, theater, art, film and other visual arts, literature, etc. from Africa, Asia, Latin America and other regions of the world, with programs that total nearly 800 events a year.

In addition to funding from Germany’s Federal Ministry of Foreign Affairs, the Federal Government for Culture and Media and the Berlin state Bureau of Science, Research and Culture, the organization gets funding support from the political parties and corporations and private citizens through its Circle of Friends membership.

In the early years after its founding, HKW introduced primarily traditional arts and culture from the developing countries. Beginning from 1992, however, HKW also strengthened its programs related to the latest developments in contemporary arts, and it has since become a source generating contemporary arts through activities such as organizing international arts festivals. In recent years it is also actively promoting international exchange in the arts through activities that include inviting artists, directors and curators from abroad and commissioning collaborative works.

In the field of performing arts, HKW has held an annual performing arts multi-media festival called “In Transit” since 2002. The opening event of the 2005 festival was a performance series focusing on Japanese contemporary dance with performances of new works by the butoh artist Akira Kasai, the Leni Basso Dance Company led by Akiko Kitamura and Un Yamada. Kasai had a long residence at HKW during which he auditioned and held workshops with eight chosen Berlin dancers and prepared a new work with them titled Das Schinkiro (Mirage) that premiered at HKW. The Leni Basso Dance Company was involved in a joint production with HKW at the same time, creating a work called Ghostly Round , which toured Europe (Greece, Switzerland, Germany, etc.) in June and July of 2006. These collaborative works were very well received.

Due to the fact that the 2006 In Transit festival was held at the same time as the Germany World Cup of football games, the program featured a focus on Brazilian culture and contemporary art called “Brasil: Copa da Cultura” to contribute to the World Cup celebrations.

HKW is also involved in disseminating information over the Internet and is involved in the running of the Culture Database online service ( http://www.culturebase.net/ ) that provides information about HKW activities and artist profiles and photos and video clips of works. This database is supported by funding from major organization in the EU and throughout Europe and is operated by organizations including HKW, Danish Center for Culture and Development (Denmark), Intercult (Stockholm), Visiting Arts (London) and The Baltic Sea Culture Centre (Poland). Its stock of information about these five organizations’ programs and artist information are a very meaningful source of information for presenters and journalists around the world.

Main festivals and programs for 2006
China – Between Past and Future
War of Images
IN TRANSIT 06
Brasil: Copa da Cultura
My construction site
Day of the Open Monument
HKW of the Future 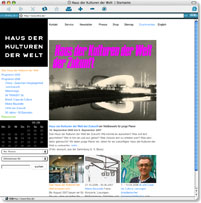