NEFA was founded in 1975. In addition to reaching out to artists and arts organizations in collaboration with the Arts Councils of Maine, New Hampshire, Vermont, Massachusetts, Rhode Island and Connecticut, the foundation also works at conducting research and gathering/transmitting information.

NEFA was founded in 1975. In addition to reaching out to artists and arts organizations in collaboration with the Arts Councils of Maine, New Hampshire, Vermont, Massachusetts, Rhode Island and Connecticut, the foundation also works at conducting research and gathering/transmitting information.

Expeditions
Gives aid to cooperative, multimedia-related undertakings such as performing arts, literature and the visual arts. Grants become available in the planning stages, and may be received all the way up until the actual performances.

Meet the Composer
Provides grants for programs that bring together composers and their audiences.

National Dance Project (NDP)
Provides grants for artists/companies of contemporary dance. The production grant system awards money for the production of outstanding new performances, while the tour grant system is designed to help cover the costs of putting on performances in and out of the country. Current recipients of the production grant:
-The Flight Project
A dance production and outreach program by the Dayton Contemporary Dance Company from Ohio, celebrating the 100th anniversary of the Wright brothers’ first flight.
-Rennie Harris PureMovement
A dance production and workshop program by Rennie Harris PureMovement, a hip-hop company.
-George Piper Dances - Akram Kahn Company
A dance production by the Akram Kahn Company, choreographed by Akram Kahn, and produced in conjunction with the British Council.

ArtistLink   http://www.artistlink.org
A site combining a database of information on artists with information on available spaces, such as rehearsal spaces, theaters, housing, etc. (Currently under construction.)

Lewis & Clark Bicentennial Arts Plan   http://www.lewisandclark200.org/
A national program founded in recognition of the 200th anniversary of Lewis and Clark’s historic journey across America. Programs that give expression to the spirit of the nation and its peoples through art are eligible for this grant.

MatchBook.org   http://www.matchbook.org/
A database including artists, as well as halls, theaters and other such venues. Searches can be made based on the artist’s genre of specialty, profile and portfolio of works, including audio and/or visuals, pay rates, etc. The database on halls, theaters and other such venues includes information on locale, external appearance, layout, facility condition, intended uses, and fees. The website is widely used by presenters searching for artists, and by artists as they plan their projects. New entries can also be registered online.

Mexico Exchange Initiative
Promotes exchange in the areas of dance and puppet shows between Mexicans and New Englanders.

Regional Economic Impact Studies
Reports are published on the results of research into the status of NPOs in the New England region. The research surveys have been conducted every five years beginning in 1978. Descriptions of the organizations’ various projects, funds and employment status reveal overall trends in the non-profit sector. A portion of the data can be accessed via NECD, shown above. 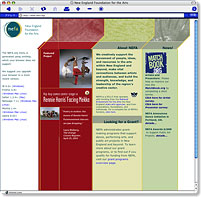