The Asahi Breweries Group became a pioneer among Japanese companies in the field of corporate philanthropy by forming a Corporate Culture dept. (present Environmental and Societal Contribution Dept.) in 1990 to promote activities to benefit the society. Among the earliest in the active corporate philanthropy efforts that have been undertaken since were concerts in the lobby of the corporate headquarters building. Today, the Asahi Breweries Group seeks to be a corporate group that fulfills its corporate social responsibility (CSR) through programs like forming Committees for the Promotion of Contribution to Society in all the company’s workplaces and encouraging all the employees to participate in volunteer activities and the like.

The Asahi Beer Arts Foundation was established to promote this type of philanthropic activities in 1989, the 100th anniversary of the founding of the Asahi Breweries Group (basic fund of 550 million yen). It is noteworthy that in addition to general support through funding, the foundation adopted a unique stance that involved “supporting arts activities that explore new areas, as a way of helping to create culture and arts for the future.” In addition to managing the “Asahi Arts Square” as a “communication bar” that provides space in the corporate headquarters building to encourage collaboration projects that lead to the development of new forms of artistic expression in the fields of music, dance and art, the foundation also provides opportunities for as yet unrecognized young artists seeking new forms of expression by working with arts NPOs around the country in organizing “Asahi Art Festivals.

In 1996, the foundation also opened the Asahi Beer Oyamazaki Villa Museum, which converted an English style chateau built in the first decades of the 20th century into a museum.

Main activities
[Support activities]
Wide-ranging support is given for classical music, opera, art exhibitions, etc. Applications for funding are accepted in October every year for programs to be held the following year (April to March). Also, as support for international exchange, funding support is given for overseas individual and group trainees and a scholarship program is managed to support exchange students studying in the arts.

[Asahi Art Festivals]
Since 2003,these arts festivals have been held each year around the country in cooperation with a nationwide network of arts NPOs to bring together festivals in the areas of art, music dance, video, etc. in programs that transcend the bounds of conventional genre. ( http://www.asahi-artfes.net/ )

[Asahi Art Square]
Since 2005, Asahi Art Square events have been held weekly, primarily on Fridays and Saturdays as a kind of “communication bar” where people can easily enjoy a wide variety of arts. This program provides performance spaces for artists seeking innovative creation in music, video, performance and other new forms of art.

[Asahi Beer Art Awards]
This awards program was launched in 2003 to recognize people who have made significant contributions in linking arts to society. With a motto of selecting winners from the standpoint of the citizens, not of the critics, 30 Asahi Brewery Group employees make the final selections for the awards from a group of candidates selected by specialists in each field. The 3rdAsahi Beer Art Awards announced in March of 2006 went to Shigehiro Ide , leader of the contemporary dance company IDEVIAN Crew, the creative unit “graf” that creates exhibition spaces in collaboration with the contemporary artist Yoshitomo Nara, the Kochi Prefectural Art Museum, Goethe-Institut Tokyo , BankART 1929 and the Fukuoka Asian Art Museum.

In addition to these activities, the foundation works in cooperation with arts NPOs and specialists to hold a range of other activities such as annual art exhibitions involving collaborations with contemporary artists, traditional crafts people and technicians from small “town workshops,” live music and other types of performances at the “Asahi Cafe Night” and a variety of seminars on different subjects in the arts. 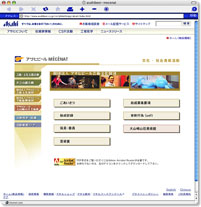