Informal European Theatre Meetings (IETM) is an international association made up of over 400 performing arts organizations in 41 countries. The association was founded in Brussels, Belgium, in 1981 for the purpose of creating a global network of professionals in the performing arts world, promoting the exchange of information and creating opportunities for training and study. In 1989 it was registered as a non-profit organization.

IETM operates on funds collected as membership fees from the member organizations based on their respective revenues, and it also receives funding for its various projects from the European countries, EU agencies and a variety of European cultural foundations. The main members are organizations in the performing arts field to which producers, directors, art managers, presenters and artists belong, while public institutions, official bodies and arts funding organizations participate as associate members (supporters).

The association’s regular meetings are held twice a year with member organizations from the different countries taking turns serving as hosts. The meetings are held with a 4-day schedule that includes working group sessions, training, plan presentations and the like, and each time they gather from 350 to 600 performing arts management professionals from around the world. The association also organizes satellite meetings on an irregular basis that focus on specific themes or regions of the world. At all these meetings there are also showcases given by the artists of the host country (city).

IETM annual meetings 2006
Apr. 19-23, Istanbul (Turkey)
Theme: “Margins of Europe”
Based on the idea that a greater understanding of the status of the performing arts in Turkey is necessary, regardless of whether or not Turkey becomes a member of the EU, this meeting has been organized as collaboration between the cultural network of Istanbul and Turkish offices of the various European cultural agencies.

Nov. 23-26, Helsinki (Finland)
This will be a large-scale meeting involving several European cultural organizations like the Finnish Theatre Information Centre, Goethe Institute and Visiting Arts while also being affiliated with the EU’s “Year of Workers’ Mobility” project and inviting representatives of other networks. As with the other annual IETM meetings, the planned agenda includes the usual working groups, opportunities to enlist art project partners and training sessions.
Satellite meetings
South East Europe
Balkan Express Network (Dates, details undecided)
This will be a meeting of the network founded in 2002 for the purpose of promoting exchange and cooperation between the Balkan countries and other regions as well as within the Balkans themselves. It is a project supported by the European Cultural Foundation.

Europe, Mediterranean region
IETM-YATF (Young Arab Theatre Fund) Satellite Meeting “Meeting Points”
March; Venue: Tangiers (Morocco)
This is a satellite meeting organized by IETM and YATF that is being held for the second time after the inaugural 2005 meeting with support from the EU Delegation in Syria. The meeting is held for European and Mediterranean region producers, presenters and festival directors with the aim of developing a new network for North Africa and the southern Mediterranean region.

Central Asia
IETM Satellite Meeting
Sept. 6-10; Venue: Bishkek (Kyrgyz)
This is the third holding of this satellite meeting for creating a Central Asian network, following meetings in Uzbekistan in 2004 and Tadzhikistan in 2005.

Africa
“Africonnexions”
Based on the projects and accompaniment of the Africonnexions network in 2005, this program will involve the regular publication of a newsletter, holding of satellite meetings for European and African representatives of the contemporary dance field and production of a manual for African dance tours and collaborative productions. The program is supported by the Flemish Ministry for Culture.

Digital
OTM (On the Move)* / IETM Satellite Meeting (Dates, venue undecided)
This is a second meeting on the theme of making use of new digital tools, following the 2005 “new digital tools and on line arts information” meeting.

*OTM (On The Move) is a Web site and database operated as part of IETM’s international performing arts project. Its unique make-up includes information of digital publication and performing arts-related information as well as sources of know-how for funding application and resume writing.
http://www.on-the-move.org 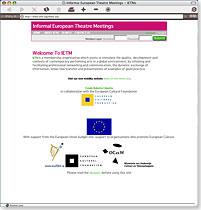