APAP is an international association of performing arts presenters from the 50 U.S. states and 15 foreign countries (1,700 members as of Dec. 2005). Its predecessor, the Association of College and University Concert Managers (ACUCM) was founded in 1957and in 1988 its name was changed to APAP. With its head office in New York, the association is made up of paying registered members that include both profit and non-profit organizations and individuals involved in the performing arts, including art managers, artists, educational institutions, city festival organizing institutions, facility operators and individuals in the field. The Association is run mainly on support funds and donations from the National Endowment for the Arts (NEA) and foundations like the Doris Duke Charitable Foundation ( http://www.artspresenters.org/donate/ ). In 1996 the Association also started its own foundation. Presently it is supporting the arts with two funds, the William Dawson Education Endowment, which supports programs related to the lifetime fostering of leaders in the performing arts, and the Classical Connections Endowment, which provides funding for young classical musicians and presenters.

The APAP’s arts market held annually every January in New York is the world’s largest event of its kind in terms of participants, gathering presenters and artists from across the U.S. and around the world. Every year this market features conferences and seminars on subjects like marketing, management and funding application, as well as showcases and workshops, etc. In 2006, the theme for the 49th holding of this market is “Creative Change. Global Exchange.” Over 4,000 people are expected to attend the four days of conferences, panel discussions and workshops and view the over 350 exhibitions and a schedule of some 1,200 related performances in the New York area. The market will be held from Jan. 20 to 24.

Main Programs of the 49th APAP Market
Winter Institute
Panel discussions and pre-conferences on themes including securing funding as a business and leadership.

Over 1,200 showcase performances
Performances will include everything from classical music to experimental theater and dance. All are free for conference members during the market duration.

Under the Radar
A one-day symposium at the Public Theater. It will feature performances by 13 groups from places like Australia, South Africa and the Netherlands.

Over 40 workshops, forums and seminars on subjects ranging from classical music to cultural diplomacy. 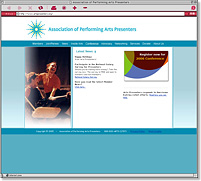