メキシコ：ゲートウェイ・トゥ・ジ・アメリカズ Gateway to the Americas

Gateway to the Americas is a Latin American arts support organization established in 2002 by the National Institute of Fine Arts (INBA), the National Autonomous University of Mexico (UNAM) and the U.S. - Mexico Arts Trust Fund. It is involved in promoting the performing arts in the Americas and overseas by supporting networking between artists, arts markets, facilities and producers. In addition to engaging in projects for the spread and development of the performing arts in Latin America, the organization also holds a biennial arts market (plans call for the third arts market to be held in Mexico City in June of 2006). The organization participated in the New York APAP in January 2005 and is also participating in the Tokyo Performing Arts Market in recent years with the aim of establishing a touring network extending to Asia as well as the Americas and Europe.

[Arts Market]
Over 160 presentations
Expected attendance of over 20,000 from around the world
Expected participation by over 500 presenters and artists from Mexico, Latin America, Asia, the Caribbean region, the USA, Canada and Europe 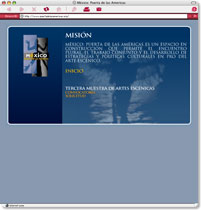 Data:
Gateway to the Americas