As an NPO running the Tokyo International Arts Festival (TIF), Arts Network Japan seeks to be and arts service organization.

The main activities pursued by ANJ are the running of TIF every February and March and holding timely seminars on current themes in the performing arts world and conferences on the subjects of nurturing artists and audiences and the like. In August of 2004, ANJ also opened the Nishi-Sugamo Arts Factory as an arts center making use of a no longer used school building.

The Nishi-Sugamo Arts Factory is being run as a joint project between Tokyo’s Toshima Ward and two NPOs (ANJ and Children Meet Artists [Geijutsuka to Kodomotachi]). Besides lending rehearsal space to artists, ANJ is making active use of the school’s gymnasium as a hall for a theater performance project, play reading events for local citizens, etc. In the future, there are plans to make further use of this facility as residence and performance venue for invited visiting performance companies from overseas. 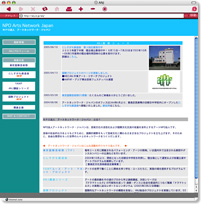