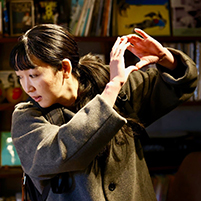 This play premiered in 2021 as a production of the theater unit “Snuunuu” led by Izumi Kasagi (born in 1976) who serves as its playwright and director, while also being active as an actor. The setting is a small, old house in a residential area five minutes from the station in a neighboring town across the river from Tokyo. The story revolves around the interaction between an old woman who finds herself unable to stand up in the garden of her home and a woman passerby who tries to help her. The circumstances of the old woman, such as her reclusive stay-at-home son, and distant scenery surrounding the town, such as a power plant where a nuclear accident occurred, are spoken about. 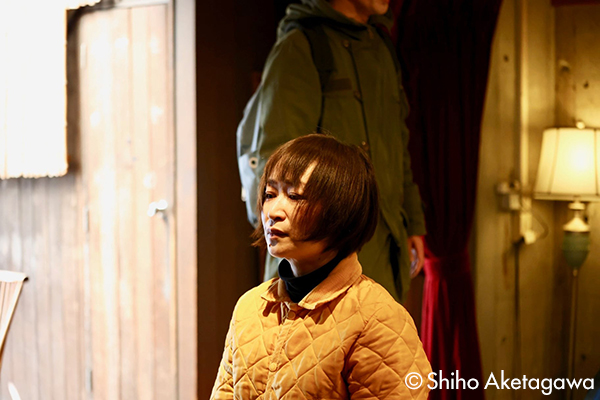 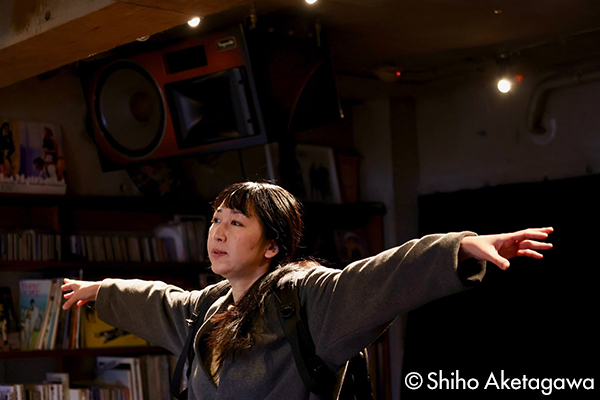 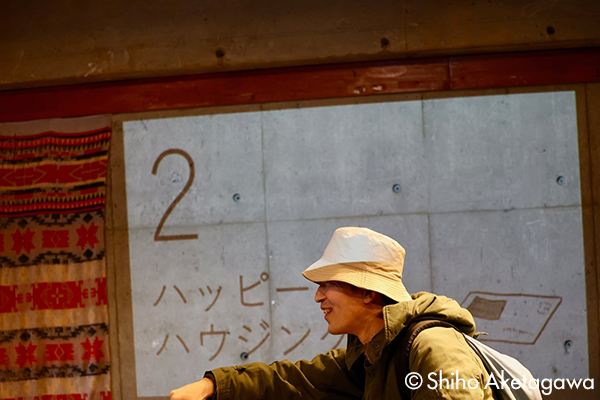 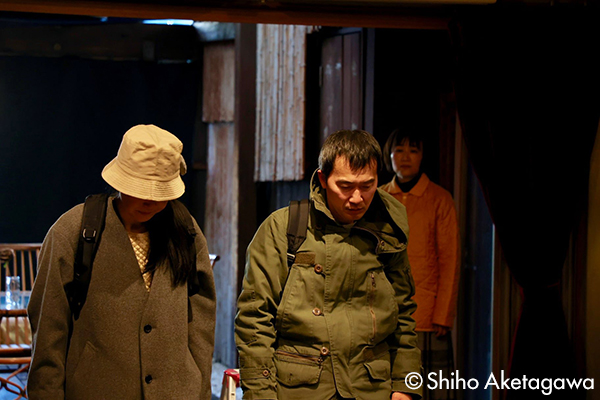 Lying on the rug, Woman 1 tells the man in detail about her daily routine as if she were talking to herself.
The man looks groggy and it is unclear whether he is listening or not.

Woman 2 suddenly shouts, “DON!” It sounds like an explosion.

Woman 1 was thinking, “What am I going to do for the rest of the day?” but as if she has been startled by the explosion sound, she suddenly finds herself unable to stand up in the yard of her house.

Appearing like a passer-by, Woman 2 asks, “Are you okay?” but Woman 1 only repeats, “It’s okay” and “Please, go on your way,” while seeming to doubt the sincerity of the kindness shown by the stranger, Woman 2 (speaking as if to herself).

The scene is an old, small house in a residential area in a town across the river from Tokyo, a 5-minute walk from a station on the Nambu Line where express trains stop.

Suspicious of the worried Woman 2 for looking in the skirt, Woman 1 then rolls up the skirt and shows it to Woman 2, while saying, “It’s okay, I’ll explain,” and “I just made a mistake.” For some reason, at that moment the Man knows what is in the heart of Woman 2. And he explains it quietly to the audience.

Woman 1 is still unable to stand up, but she offers Woman 2 something to eat, like sweets or a rice ball.

Even as she talks on, Woman 1 tries to stand up somehow, but still can’t.
Woman 2 reaches out to Woman 1 through the rails of the yard’s gate but can’t reach her. Some men pass by but don’t try to help her. Woman 1 tells Woman 2 to leave her alone because she will find a way to help herself. She adds that that’s what she has always done.

The reminiscences of Woman 1 (and perhaps the Man’s).

The Man is the son of Woman 1. Woman 1 calls out her son’s name as “Fujio,” but he is a recluse who stays in his room with headphones on, repeatedly listening to the music of a singer that his best friend in high school told him about. He was never able to fulfill the promise he made with his best friend to someday go to the singer’s live concert.

Fujio suddenly stands up and gets dressed. He asks Woman 1 [his mother] for some money because he needs to go to Shinjuku for a part-time job interview.

Woman 2 says in way of narration that, “At the time, Fujio was 53 years old.”

Woman 1 explains to Woman 2 that her ugly, swollen right leg is due to a failed hysterectomy operation. She also tells Woman 2 that her husband didn’t stay at her bedside when her uterus was removed. She goes on to say that she doesn’t care about such things, and that she usually keeps smiling and is always alive and well. But with that, it is apparent that Woman 1’s thoughts suddenly begin to weigh on her more heavily.

Woman 2 tries to say something to Woman 1 even though she repeatedly asks to be left alone. But, as if she is wondering if perhaps someone like herself doesn’t matter anyway, Woman 2 finally and walks away.

On her way home, the Man (Fujio) speaks to Woman 2, saying, “I couldn’t go to Shinjuku after all.” It appears that he had a panic attack on the train. He couldn’t go to Shinjuku, but for some reason he went to a pachinko (slot ball) parlor at Mukogaoka Yuen and spent the entire 10,000 yen that his mother gave him playing the “CR Umi monogatari” game and ended up penniless.

The Man walks out to the bank of the Tama River. He talks about the scenery of the city where he lives and says that there was once a mugging crime in the park in front of the river. The culprit was the same age as the Man (Fujio). At the same time, he suddenly remembers his high school classmate friend, Hashimoto. “Have you all forgotten [me]?” the Man says.

A migratory bird (Woman 2) in the sky announces that, “Contaminated water will be released soon,” and shouts angrily, “We’ll never forget, we’ll never let you forget, how can they do such a terrible thing?”

The migratory bird suddenly asks the Man, “Will you come with me? It’s far away,” and it adds, “You can get a job there,” and invites him on a trip. The Man seems happy at the invitation, but he throws himself off the bridge into the river.

The migratory birds can’t hide their agitation. However, the bird leader proposes that it was an accident, saying, “He was just at a moment of doubt” and “It just happened at this same moment,” and the migratory birds are convinced by that idea. They rescue the man his hard fall, and they take off together. Inside the man, the music his old friend had lent him is playing on.

The Man came back to Woman 1. He said he stopped at house along the way on a trip he is taking. Woman 1 tells him that his father has died and that his best friend has opened a shop. Woman 1 explains “Suddenly, I was able to talk to Fujio. When I call him, he replies to me.”

Woman 2 returns to Woman 1, who is still sitting in the yard. She makes her way across the gate and tries to help Woman 1 get up, but she is too heavy to lift easily.

Seeing the Man nearby, (Woman 2) calls out to him, “Help me,” but the man doesn’t get the point, saying, “Oh, can you see?” or “I have to go.” The man entrusts Woman 1 to Woman 2 and tries to leave with the migratory birds.

Woman 1 is convinced that she will never see her son again, and stands up with great mental strength, saying, “I will see you off.”

Woman 2 enters the house with Woman 1 and sees how messy it is. Not a single piece of the mail scattered on the floor has been opened. Woman 1 seems to be about 90 years old now. Woman 1 wants to sleep, but she mutters, “This final time, I want to go to the sea,” and, “I haven’t been useful in anything my whole life was.”

In her cloudy consciousness, Woman 1 hears the singing of the migratory birds.

In an attempt to take Woman 1 to the hospital, Woman 2 goes out into the street, raised her hand to hail a taxi, but it speeds away.

Born in 1976 in Iwaki City, Fukushima Prefecture, Kasagi is an actor, a playwright and the leader of the theater company Snuunuu. While studying at Japan Women’s University, she joined U-enchi Saisei Jigyōdan led by Akio Miyazawa and performed as an actor. Since then, she has appeared in stage and video productions of companies such as PenguinPullPalePiles, “Gekidan (Theater Company), Yukiko Motoya,” Theater Company Haegiwa, works by Toshiki Okada, and Mikuni Yanaihara Project. She also directs for Snuunuu. In 2018, The play Ie no Kagi (The Key of the House) that Kasagi wrote for the theater unit Last Songs led by Kenichi Suzuki was nominated as a finalist for the 6th Sendai Short Drama Award, and in 2021, Snuunuu’s performance of The Sea of Moscow was nominated as a finalist for the 66th Kishida Drama Award.