This is an experimental work that premiered in 2021 created by Takuya Murakawa (born 1982), a director and film artist who was first influenced by the documentary film works he studied at university and went on to create stage works to be performed in front of a camera and then edited as film works. The subject of this work is a stabbing incident that occurred in a supermarket when Murakawa himself happened to be present. Actually appearing on stage are a few actors including the store’s cash register clerk and the customer involved in the incident, while speakers also convey the voices of the store’s manager and others, while depictions of elements of the stressful daily lives that lead up to the incident are also conveyed in painful detail. 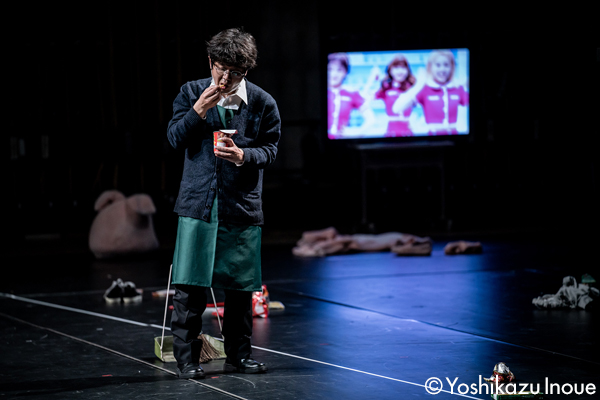 The setting is a small-town supermarket. One of the employees, a woman named Hazama, arrives at work riding a bicycle with a child’s seat on the back. She greets the other employees and the store manager (none of whom are actually seen), changes into her work uniform and prepares for the store’s opening.

When she returns to her locker, her smartphone is ringing. It is a call from the nursery school saying that Hazama’s daughter, Ayaka, is feeling ill. She replies that she can’t leave work to come for her daughter, and then hangs up and returns to her position in the store.

We hear the mechanical peep, peep sound of the bar codes being read at the register. Also heard is the repetition of the obligatory customer greetings of Irasshaimase (Welcome) and Omatase-itashimashita (Thank you for waiting).

From time to time we also hear the store manager calling over the loudspeaker, “Hazama san, Hazama san …” and giving her directions for additional tasks like cleaning and stocking shelves.

Hazama says the usual “Irasshaimase” to a Man who appears to be a customer. When the Man drops a plastic bottle that he has taken from one of the shelves, she picks it up and hands it to him.

The manager’s voice is heard giving Hazama repeated instructions for jobs to do, while adding pressure for her to do the tasks “right away.” The Man with the plastic bottle is standing in front of the cash register.

The manager’s voice is heard telling Hazama that there have been complaints about her from customers, and repeatedly he insists that she needs to smile more when dealing with them.

When she says that her daughter has fallen ill and wants to take some time out of the workday to go see her, the manager doesn’t give Hazama an answer. Instead he says that the daily exercise is about to begin and for her to participate energetically.

The manager repeats the standard phrases of customer interaction: Irasshaimase (Welcome), Arigatou-gozaimasu (Thank you), Taihen Moshiwake-gozaimasen (I’m terribly sorry) and Mata Okoshi-kudasaimase (Please come again), and we hear the employees’ voices repeating the phrases in unison. Hazama heads off toward the stockroom she has been instructed to clean.

Mikihiro is lying on his bed watching a video on his smartphone. We hear Ayano Kaneko’s song Shukujitsu (Holiday) playing. After being called repeatedly by his mother, he reluctantly gets up and goes to the washroom to brush his teeth.

We hear the mother’s voice asking Mikihiro if he is not going to high school again today, but he doesn’t answer. He gets dressed and has started watching the video on his smartphone again when we hear his mother’s voice telling him to go to where their car is parked. Then the two of them head off to the shopping mall.

We hear his mother’s voice saying she has something to buy elsewhere, after which Mikihiro enters a clothing store. We hear the voice of the clothing store clerk somewhat insistently advising Mikihiro to try on a particular shirt and pair of trousers. The clerk is also heard advising him that it is best to tuck the shirt in below the trousers, and eventually he leaves the store wearing the new outfit like that.

We hear the mother’s voice complimenting him on the new clothes. Mikihiro has his mother drop him off in front of the station, and when he meets his friend there, the first thing the friend says is that the new outfit looks bad because he has the shirt tucked in, which isn’t like him.

Mikihiro takes out his smartphone and begins playing a video. Again, we hear Ayano Kaneko’s song Shukujitsu (Holiday). Suddenly, Mikihiro takes off the new clothes and throws them on the ground.

It is now just after noon at the supermarket. On her lunch break, Hazama buys a bag of “Jagariko” fried potatoes and some “Ampan-Man” candy on the sales floor and then goes to the changing room to eat the fried potatoes.

When she returns to her work of restocking the shelves, the same Man as before has come in to shop again. The Man again drops a plastic bottle, and Hazama picks it up and hands it to him. In the background we hear work announcements.

The Man stands in front of the cash register, but no clerk appears. Again, the Man drops the plastic bottle. Hazama goes to the register to handle his purchase. Suddenly the Man says, “Hazama san, if it is really so bad, you should go and get your daughter at the nursery school,” and then he throws a shopping basket and leaves.

Hazama suddenly runs to her bicycle and rides away from the supermarket.

The setting is the dimly-lit supermarket with no one in sight. In a display area of the store, a cosmetics commercial plays over and over on a screen.

The store manager enters, puts down the cleaning equipment he was carrying and begins snacking on some “Jagariko” fried potatoes in the sales area. In a few moments we start to hear recordings of “Comments from the customers.” The announcement begins with the words, “To the Store Manager…”, and goes on with a list full of complaints from the customers.

The manager takes a plastic bottle of tea from a shelf and begins to drink from it. When he begins to smoke a cigarette, the “Comments from the customers” recording shifts to “Comments from the employees” directed at the manager. Among them are ones that criticize him for talking to them in an over-familiar manner, and of having a son who refuses to go to school, etc. The manager takes a head of cabbage from a vegetable counter and begins to eat it.

The “Comments from the employees” changes to the voice of Hazama, and the exchange where she asks to be allowed to leave work for a while to see her daughter is repeated over and over. The manager strikes the cabbage against his forehead. We then hear voices repeating the standard phrases of customer interaction: Irasshaimase (Welcome), Arigatou-gozaimasu (Thank you), Taihen Moshiwake-gozaimasen (I’m terribly sorry) and Mata Okoshi-kudasaimase (Please come again).

The manager picks up the cleaning equipment and leaves the sales floor.

Evening at the supermarket. Hazama is standing at the cash register attending to the customers in a polite and energetic way. The manager’s voice comes over the loudspeaker to give Hazama an instruction, but his voice sounds a bit kinder than usual.

As Hazama is busy restocking the shelves, the Man comes to shop. The Man takes a plastic bottle and drops it, and Hazama picks it up and hands it to him.

The manager’s voice comes over the loudspeaker and directs Hazama to go to the cash register. We hear the mechanical peep, peep sound of the bar codes being read at the register. The customer interaction phrases are repeated: Irasshaimase (Welcome), Arigatou-gozaimasu (Thank you), Omatase-itashimashita (Thank you for waiting), Reji-bukuro ha Goiriyo-deshouka (Do you need a bag for this?).

Then the Man slowly approaches the cash register, takes a knife out of his pocket and stabs Hazama from behind. Hazama continues to work the register, but the Man stabs again and again until she finally collapses, after which the Man just stands there. The peep, peep sound of the bar codes being read ceases, followed by a long silence.

The supermarket begins business as usual again, as if nothing had happened. Employees stand at the cash registers and customers shop, while the lively BGM plays on.

The man continues to stand there, but employees continue to work at the registers and serve the customers as usual.

The BGM changes to Auld Lang Syne. The employees begin to clean up the store, clearing off everything that had stood on the stage and removing it to back-stage.

The Man is still standing where he was. Hazama comes riding in on her bicycle. It appears as if she has come to a park with her child. “What shall we play?” she asks. “How was nursery school today?” she asks. Eventually, they start playing a game of “Pull down the pole” at the sand box. We hear the words “Aha! I pulled it down. Mommy loses.”

Murakawa is a director and film artist. Born 1982. Lives in Kyoto. His works born of documentary and field work methodology and presented as film, stage works and visual arts have won him numerous invitations from festivals and theaters in Japan and abroad. The work Zeitgeber (2011) where a single performer gives physical caregiving to a single person in the audience invited on stage to receive it at that day’s performance has been restaged numerous times in Japan and abroad, and in 2014 it was performed again at the “Japan Syndrome Art and Politics after Fukushima” program at HAU Hebbel am Ufer in Berlin. Other Murakawa works like Everett Ghost Lines (2013), where the performers on stage act out instructions sent by mail to them, re-examine the methodologies of expression on the borderline between fiction and reality and search for answers to the questions of what true reality is in the real world. In recent years, his work Independent Living premiered at KYOTO EXPERIMENT Kyoto International Performing Arts Festival 2017 and was invited for restaging at Festival Theaterformen (Braunschweig, 2018), and his work Moonlight (premiered at ROHM Theater Kyoto “CIRCULATION KYOTO” and was invited for Festival/Tokyo 20). Chosen as an East Asia Cultural Envoy in 2016 (Japan Bureau of Cultural Affairs), Murakawa resided in Shanghai and Beijing, China and conducted workshops, and he was also chosen as a Junior Fellow of the Saison Foundation 2014-2019. Murakawa also serves as a part-time instructor at Kyoto University of the Arts’ Department of Performing Arts.