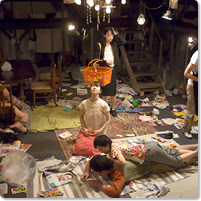 Kazoku no Shozo (Portrait of a Family)
Shu Matsui

Portraying seemingly unrelated “samples” of the daily lives of a reclusive son and his mother, a part-timer and other self-injurious characters representative of the twisted side of contemporary Japanese life, this play convey the sense of closed stagnation in the lives of one strata of contemporary society through a series of low-tension scenes. The raised audience seating looks down from four sides on the stage. The stage floor is scattered with an accumulation of trash and the actors carry on and off the necessary furniture and props for each scene as the play progresses. 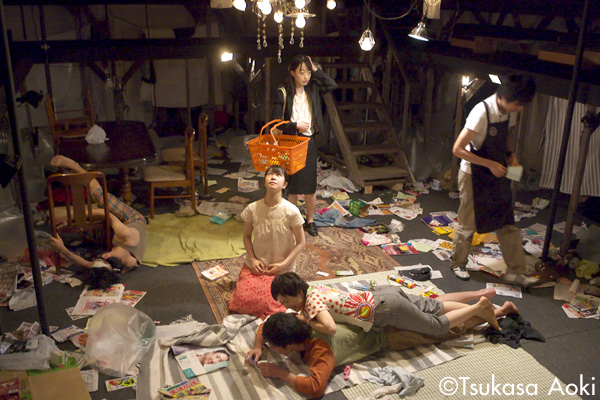 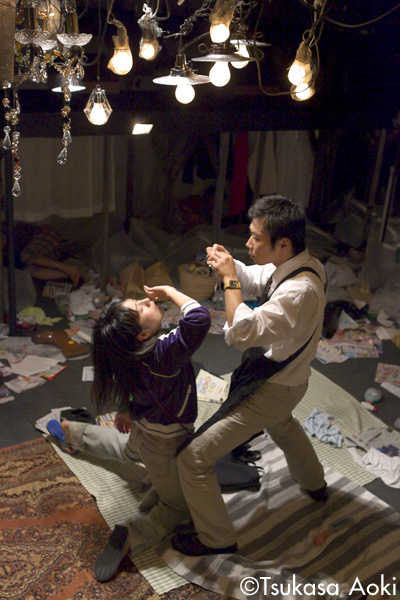 On the darkened stage, lights come up gradually to reveal a “Woman” lying on the floor and the building’s “Proprietor.” The Proprietor is showing the Woman a room for rent.

The scene changes to a meeting going on in a convenience store. Standing around in attendance are the “Store Manager,” a “Part-timer,” the Proprietor’s “Wife” and the “Mother” of a reclusive “Son.” The Part-timer is giving his debriefing report and self-evaluation for the day. The Mother is the only one of the store employees who seems to be out of sync with the mood.

The Son and the Woman seen earlier appear in a room. The Son is treating the Woman like an oversized doll, with actions like putting socks on her feet. Nearby the Part-timer is eating a boxed lunch, as if in another world. Identifying with the sight of the Part-timer eating, the Son launches into a lengthy explanation of how he ate his own boxed lunch. Enters his Mother. At this, the Woman suddenly becomes immobile. The Son is ignoring the Mother.

The Proprietor and his Wife are having harsh words about their mutual lack of interest in each other and their absence of sexual attraction.

In the employee lounge of the convenience store the Store Manager is questioning a “Girl” who has been caught shoplifting. The Girl, however, shows no signs of regret or apology for her act. The Part-timer come in on his break and is asked to watch the Girl. The Part-timer begins eating a boxed lunch but is soon tricked by the Girl into a situation that gives the appearance he was trying to molest her. The Mother makes accusations against the Part-timer. As the Mother tries to comfort the Girl, she realizes that the Girl is one of her former students from when she was a teacher.

The scene returns to the Son’s room. The temporarily immobile Woman has begun to move again. Playing around like a child, one movement causes a contact with the Son by one of her hands. This causes her to become suddenly immobile again, while by her side the Son is lost in contemplation.

A “Student 1,” “Student 2” and “Student 2’s Boyfriend” are watching a video of their recent trip. The only ones in the pictures are Student 2 and her Boyfriend, and as with the video, Student 1 is being excluded from the conversation.

At the convenience store the Part-timer is busy changing the price tags on the goods to be discounted. A “Language Teacher” follows along behind him, putting discounted goods into her shopping basket. The Teacher is chiding the Part-timer with accusations that he is slow in discounting the boxed lunches because he wants to save them for himself.

It is another meeting at the convenience store. It is the Mother’s turn to give a debriefing report and self-evaluation on her day. As she talks her tone changes to her former tone as a schoolteacher and her subject reverts to an explanation of the schedule for a student graduation ceremony. In closing she directs the supposed students to join in singing a chorus, and as the singing begins the scene changes to the Mother’s home, where we see Student 1 and Student 2 have come for a visit.

Mother asks them if they remember the Girl shoplifter, who was formerly their classmate. But it is evident that they don’t remember her. Mother refers to the Girl as “the person everyone has blanked out of their memory.”

The scene returns to the employee lounge of the convenience store. The Girl shoplifter is repeatedly going through motions that mime shoplifting and repeating words of regret for her act while the Store Manager looks on with the air of someone coaching her. Even with this, the Girl shows no signs of true shame or regret. The Store Manager tries to arouse some shame in her by saying he is going to take photograph as a record of her crime. As he is taking the photograph he notices for the first time the scars of razor cuts on her wrist. As the Girl struggles to take the camera away, for some reason the Store Manager, says, “Swear at me.” An argument ensues, but in the end the Girl gives in and begins to curse at the Store Manager.

The scene changes to the Proprietor and the Woman as they talk about the amount of rent. No matter what the Proprietor asks her, however, the Woman’s answers are off the point. Finally, she says she will not rent the room but will stay in it anyway, and she hands the Proprietor and envelope. Opening it, he finds it empty. Just then his Wife appears and the surprised Proprietor quickly crumbles up the empty envelope in his hand. The conversation that ensues between the husband and wife is again full of malaise.

In the next scene the Woman is cleaning the wax from the Son’s ears. When the Son begins to sing in the Mongolian khoomii style, calling it “the voice used to call sheep in,” all the other actors gather on stage. The Woman interrupts the Son’s state of bliss by suddenly standing up. She leaves the Son lying as if dead.

The Language Teacher and Student 2 are in the midst of a French conversation lesson. Student 2 is reading a text, but the Teacher is reading a letter she sent to a man she has parted with.

In the convenience store, the Part-time and the Mother are checking the shelf stocks. The Part-timer is telling the un-adept Mother how to do the job more efficiently, but the Mother counters with a claim that there is “value in inefficiency” as well. After finishing their job they race off the stage.

Student 1 and Student 2’s Boyfriend are about to cheat on Student 2. The Boyfriend wants to start making love right away but Student 1 says, “First tell me how you had sex with Student 2. If you really want to do this, you should be able to tell me that.” They leave the stage together kissing passionately.

At the convenience store the Language Teacher is following the Part-timer around as he changes the price tags on goods to be discounted. The Teacher tells him that she is being stalked by her former boyfriend. She forces an envelope on the Part-timer, telling him that she will pay him to deliver it to her former boyfriend. But inside the envelope is only a blank piece of letter stationary.

A meeting is being held again at the convenience store. The Store Manager announces that he is going to close the store permanently. Amidst the angry objections from the store employees the Girl shoplifter slaps him on the face. This brings the store employees back to their senses. The Part-timer and the Wife leave. When the Mother comes to get some boxed lunches to take home, the Store Manager announces the he and the Girl shoplifter are going to get married.

Student 1, Student 2 and the Boyfriend have come to the Mother’s house to seek advice about their triangle relationship. As the three continue to hurl self-centered arguments at each other, the Son appears, apparently looking for the Woman. The Mother lets out her pent-up anger at her dazed-looking Son for the way he has treated her like a slave. Sympathizing with the Mother, Student 2 joins in hurling abuse at the Son. Circling the room with his eyes closed, the Son calls for the Woman in a khoomii voice. Student 2 blocks his path and tries to convince him to open his eyes to the reality of his state, while nearby his Mother breaks down in tears.

The Proprietor, his Wife and Student 1 enter. The two women are having a French conversation lesson. To the annoyed Proprietor his Wife proposes that they try role-playing as a couple with a baby child. The Wife describes a scene of the baby taking its first steps. Suddenly the Proprietor announces that he has gotten an erection. The couple gets up to go have sex for the first time in a long time. But, just as they do the Proprietor says he has lost his erection.

The scene shifts to the convenience store where the Store Manager the Girl shoplifter and the Part-timer are taking inventory of the goods on the shelves, but the Part-timer is the only one really working. The other two are just breaking goods or stealing them. As the angered Part-timer begins to criticize the Girl, the Mother throws a package at him.

The play has come to the final scene and all of the characters are gathered on stage. They run through a quick summary of all the scenes that have taken place. Then, as the Son sings in his khoomii voice they begin to fall asleep. The Son says, “Let’s bury our own bodies.” The Woman says to him, “Good night.” The Son notices an envelope that the Woman has left behind. He looks inside to find it is empty. The Son just stands there with a dazed expression.

Born in Tokyo, 1972. In 1996, Matsui joined Oriza Hirata’s theater company Seinendan as an actor. Later he began playwriting and directing as well. After premiering his plays Passage (winner of the 2004 New Playwright Award of the 9th Japan Playwrights Association Awards), World Premiere (2005, finalist for the 11th Japan Playwrights Association Awards), Basement (2006) and Shift (2007) in the independent production series for young Seinendan members, Matsui left Seinendan to start his own company Sample with an opening production of his play Calorie Consumption in September 2007. His plays have won acclaim particularly among those of his own generation for the unique twists they put on conventional values and the nihilistic worlds he depicts by breaking down the illusions of human relationships and communication. As the opportunities for his works to be performed abroad increase, his plays Shift and Calorie Consumption have already been translated into French and Basement has been translated into Italian. Matsui’s plays Family Portrait and Ano Hito no Sekai were short-listed nominees for the 53rd (2008) and 54th (2009) Kishida Drama Awards. His career includes an increasing number of activities outside his own company such as writing plays for other companies and directing plays in translation. In recent years he has also taught at the university level, written numerous short stories and essays and appeared in television commercials, movies and plays.
Matsui won the 55th Kishida Drama Award for Jiman no Musuko (2010).