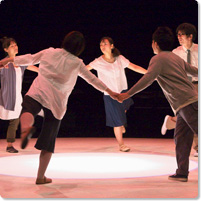 This play is a rap musical that depicts the span of time from the birth of our planet Earth until its demise, using as its metaphor the life of a young girl named Chii (meaning Earth). 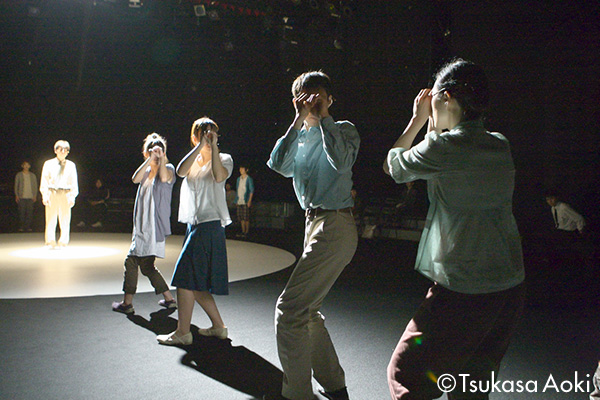 In the center of an empty stage is painted a large white circle. The circle represents the planet where the main characters live, with the space around it representing the surrounding universe. The audience seats are arranged to surround the circle of the planet and the audience watches the play as if watching Earth from outer space.

In the darkness is heard the voices of men and women in conversation. The universe is still in the state of “nothingness” before time and light. All the voices cry out “big bang” and suddenly light and sound come to the stage. Drum beats sound rhythmically, the sound of heartbeats, time tones count out the passage of time, and in time with these sounds, the actors walk around the circle rapping about the birth of the universe and the girl-child Chii (Earth).
(From this point on in the play progresses in a style based of rap in the manner of word play, group chants and acting in the manner of make-believe, where the actors change roles back and forth at will.)

Chii lives in a family of five with her grandmother, father, mother and older sister. In double image, ordinary apartment life and scenes of the demise of the earth are played out in rap that sounds like word play.
The scene changes and there are now a boy and his teacher positioned on either side of the circle with telescopes, with which to observe it. The boy is elated at having discovered a planet not noted on any of the astronomical charts, but his teacher tells him that he is only seeing the light traveling from a planet that has already perished. When the boy increases the magnification of the telescope he sees Chii on the planet.

Once again the scene returns to Chii’s apartment. Chii is looking at the stars with her telescope. When the family gathers around the table for dinner, Chii says that for her birthday coming up in a week she wants a new, more powerful telescope that she can see farther with. Later she begins to circle her planet, wishing time would pass more quickly until her birthday.

Watching this, the boy is told by his teacher, “That is rotation.”

On Chii’s birthday she has gotten the new telescope, but soon she is begging her parents for a new, more powerful one that can she can see even more with. In hopes of speeding up the passage of time until her next birthday, she begins walking around the circumference of her planet again.

The teacher tells the boy, “That is orbiting.”

The scene changes and it is now the day when Chii’s family first moved to their present apartment. Going with her mother as she introduces herself to the neighbors, Chii meets a girl named Tsuki (meaning Moon) and they become friends.

Watching the two girls at play through their telescopes, the teacher tells his student that they have found a moon orbiting the planet.

Chii and Tsuki are playing house in the park, when suddenly their lives begin to be acted out in fast-forward, from a fight that starts from a trifle, to a “time capsule” they fill with memories, graduation, going to college, getting a job, marriage, giving birth and finally Tsuki is old and on her deathbed. Then, just as suddenly, the voice of Chii’s older sister come to the park to call them home ends their playing house.

“I want to see that planet with my own eyes,” says the boy to his teacher. His teacher explains that the world he has seen through his telescope no longer exists and the only way to see it would be to travel there at faster than the speed of light. Even after being told how stars and planets eventually die, the boy can’t give up his desire to see it. So the teacher tells him how to travel faster than the speed of light.

It involves riding on a shooting star and using the force of gravity to accelerate in a “swing-by” trajectory. The teacher compares it to the acceleration and feeling of release that you feel riding down a hill on a bicycle on a trip in summer vacation.

The scene returns to Chii’s home. Chii and her sister lie in their bunk beds. Chii complains that her stomach feels queasy and she can’t sleep. Her sister won’t listen to her. Finally, the whimpering Chii falls asleep.

When they wake up it is the Earth’s final day. There will be no tomorrow.

The teacher makes a farewell telephone call. It is already too late for Chii to hear the voice of the teacher calling her to tell that the boy is traveling toward Earth at faster than the speed of light that he may be able to reach her it in time.

The night of Earth’s last day has come. Chii’s family is looking up at the night sky to see a full moon shining brightly. On the moon stands Tsuki holding a mirrored ball of the same shape as the time capsule she and Chii buried that time in the park as they played house. In the capsule are written words that they couldn’t speak at that time. Now, Tsuki reads them as if no one is listening.

The scene changes again to just the family together. The countdown to the end of the planet has begun. When Chii hears that it will get hotter and hotter until everything burns and disintegrates, she asks, “Can we all hold hands?”

The family stands in a circle. The “song of the end of the Earth” begins, performed in rap and dance. Then the boy appears riding a bicycle and the final scene finds him and Chii alone.

The two stand in the center of the circle.
The boy says, “I have been watching you for ten billion years.”
Chii says, “Will you watch over me until I fall asleep?”

When Chii pulls the chord to turn off the florescent light overhead all light and sound on the stage are extinguished.
“Good night.”

Born in Aichi Pref. in 1982. Shiba is a member of the directing department of the Seinendan theater company. He won the 2nd Sendai Theater Town Playwriting Award for Dodomino , a play written in 2004 while Shiba was a student in the Nihon University’s College of Art. In October 2009 he formed the company “Mamagoto” as an internal “Seinendan Link” company under the Seinendan umbrella. His works for this company are characterized by subtleties of the seemingly unexceptional happenings of everyday life expressed in carefully selected words and then brought to stage with concepts from non-theatrical sources, such as the employment of loops and samplings. Representative works such as Ayumi (Walking), a play in which the actors walk continuously throughout the performance and Hanpuku katsu Renzoku (Repetition and Continuation) in which a mechanism of looped monodrama is employed to portray a large family, are examples of the new perspectives and methods he uses to depict people’s everyday lives. Shiba and his company are also active in regions throughout Japan as exemplified by recent performances and workshops in Aichi Pref., a playwriting seminar in Kani City, Gifu Pref. and directing at the Iwaki Sogo High School in Fukushima Pref., etc. The play Wagahoshi (Our Planet) won the 54th Kishida Kunio Drama Award. In March 2010 he will a performance independent of the Seinendan Link companies.