This is an incorporated public interest association whose members include performer organizations and individual performers, such as actors, singers, musicians, dancers and other performing artists, as well as professionals involved in the performing arts, such as technical staff and producers. It was founded in 1965. As of 2022, there are 70 official member organizations and seven supporting member groups.

Around the time Geidankyo was founded in 1965, there was a growing sentiment that it was time for Japan’s original copyright laws established in 1899 to be revised and updated. Since the Meiji period, when the old laws were enacted, changes brought about by new audio-visual culture such as movies, radio, and phonograph recordings had already been dealt with in repeated revisions to the original laws. However, with the start of television broadcasting in 1953, the mass media industry developed dramatically, and finally the work of completely revising the Copyright Act began in 1962. Although the role of performers in the performing arts who were directly responsible for contributing to such mass-media culture as television had become increasingly important, the social status of these performers had remained comparatively low, and the protection of performers’ rights and social security benefits had lagged behind other fields.

As the task of completely revising the copyright laws progressed in this way, Geidankyo was established to seek the creation and protection of not only the rights of authors but also the rights of performers, which included peripheral rights related to works in general. At the same time, Yasuo Hiramatsu, who was active as an actor and voice actor (who became a managing director after the establishment of the Geidankyo), worked hard to establish the organization, and the first chairman was Musei Tokugawa, a narrator active in Japanese silent films and comic storytelling. As for peripheral rights regarding works in general, numerous proposals made on a continuing basis by the Geidankyo were clearly reflected when the Copyright Act was completely revised in 1970.

The pillars of the activities of the Geidankyo since its establishment have been “improvement of technology,” “improvement of social status” and “welfare,” and the provision of performances that transcend genres and the implementation of sponsored performances for the purpose of technical study of performers (until 1989), the request for the establishment of a private audio and recording compensation system, the request for ratification of the International Convention for the Protection of Performers, Phonographic Producers and Broadcasting Institutions (Rome Convention), With the launch of the Entertainer Pension Mutual Aid System (abolished in 2009), he has been engaged in a variety of activities, from performance projects to policy proposals.

Currently, the Center for Performers’ Rights Administration (CPRA) is engaged in three main projects: for the CPRA to properly administer the peripheral rights of activities by performers, the Performing Arts Promotion Project, which operates the project by the same name, a cultural base for creative exchange utilizing a renovated former school in the Shinjuku District of Tokyo, a promotional project that conducts traditional Japanese performing arts experiences for children and projects for research and lobbying civic policy proposals.

In particular, in the policy proposals, it has a track record of leading to the enactment of the “Act on the Promotion of Theaters, Music Halls, etc.” in 2012 and the “Fundamental Law for the Promotion of Culture and the Arts” in 2017, and since the COVID-19 pandemic in 2020, it has made proposals to seek support for performing artists, staff, and other related parties who have been severely affected by the cancellation of performances to prevent the spread of infections.

In addition, the “Survey on the Activities and Actual Conditions of Life of Performing Arts Performers” (“Activities and Living Conditions of Performing Arts Performers and Staff” from the 7th survey in 2005), which has been conducted since 1974 (conducted once every five years since 1985), is a valuable document that investigates over a long period of time the activities, economic situations, employment forms, working environment, etc. of performers and staff involved in the performing arts. In 2005, a version of the survey specializing on animators was also conducted and published. 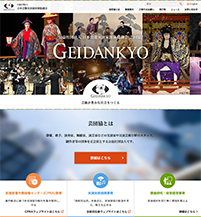