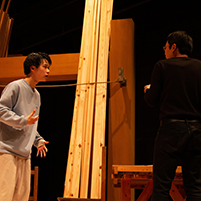 That's why Billy is in Tokyo
Ryuta Horai

Modern Swimmers, a theater company in which Ryuta Horai (born 1976) serves as the resident playwright, premiered this play in 2022. It was written during the COVID-19 pandemic. In it, Rintaro, a college student who had a vague desire to become an actor, moved to Tokyo and decided to join a small amateur theater company that he had auditioned for on a whim. The play is a real-life drama in which the close human relationships of the members of a theater company that has influenced the artist’s own life and scenes of theater creation are revealed from Rintaro’s perspective, along with the disconnection caused by the COVID-19 pandemic. 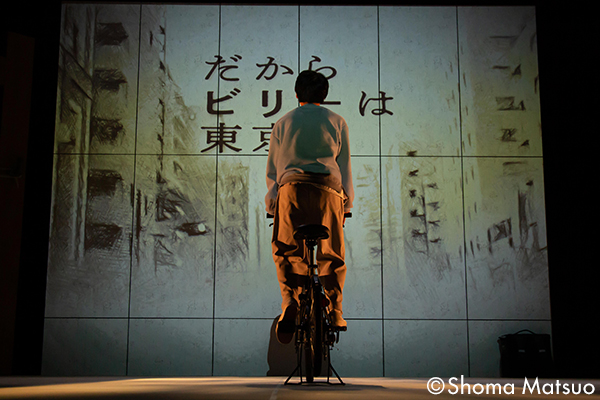 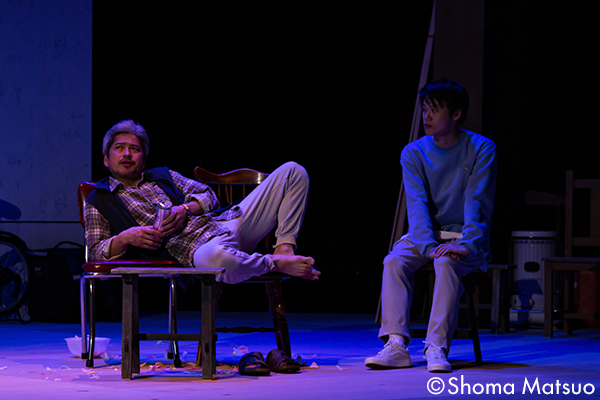 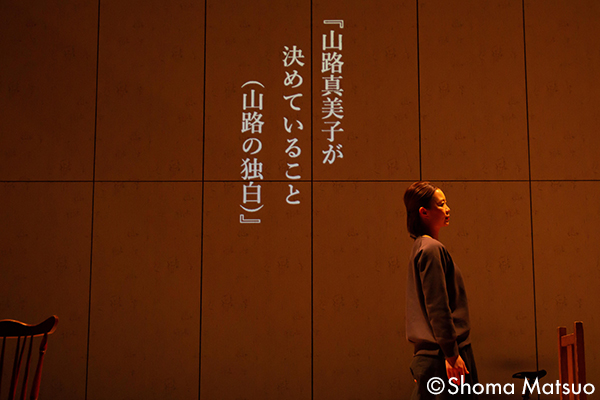 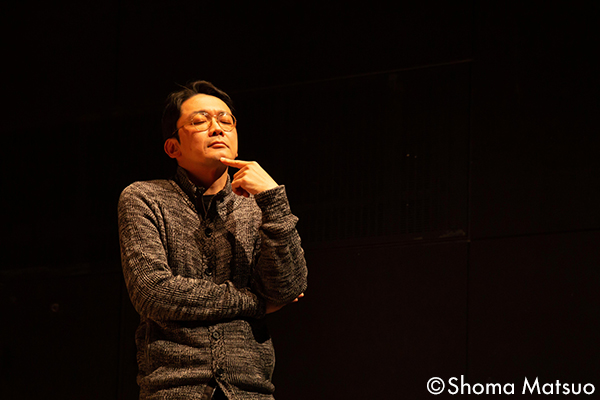 Interviews for joining the theater company Yorunohate are being held at the company’s rehearsal studio. In his interview, Rintaro says that he was impressed by the performance of the protagonist of the musical “Billy Elliot” who aspired to become a ballet dancer, and that it made him decide to become an actor. The interview exchange didn’t really go very well, but since he was the only applicant, he managed to be accepted. The scene changes to a rehearsal of the theater company. Nomi, who is in charge of the playwriting and directing for the company, isn’t making much progress with the script but tries to conduct a rehearsal to work on it. However, the reaction of the theater company members is not good. Only the new member Rintaro is enjoying his first rehearsal experience.

The scene shifts to the home of Rintaro’s father, Tsunehisa. Rintaro tells his father, who lives apart from the family due to his alcoholism, that he has decided to become an actor, but his father doesn’t take him seriously. Rintaro happens to overhear a phone call between Sumiyoshi, a member of the theater company, and her Korean lover. The two are fighting because of their cultural differences.

Rehearsals go on for the script that isn’t clear to anyone yet. Everyone tries to act as if they understand it, but Sumiyoshi alone still remains unconvinced by it. After rehearsal, they go off drinking, for drives or to karaoke.

The scene returns to the father Tsunehisa’s house. His father tries to take Rintaro to a sex club to give him a lesson in life. The gap in their realities leaves Rintaro speechless.

The scene returns to the rehearsal studio. Rintaro is highly agitated, and a heated argument develops when Sumiyoshi says she is going to step down. And when Nomi also admits, “I don’t know what I’m writing,” the coming performance is postponed. Here too, the COVID-19 pandemic has cast its new shadow.

The theater company meetings are being held online. Rintaro has graduated from college and now makes a living delivering Uber Eats meals. Nagai seems to be doing well in online tutoring work. Discussions about the next performance are not conclusive because the conditions for each of the members have changed.

Rintaro and his father talk on the phone. The pub his father runs can’t serve alcohol anymore due to the COVID-19 pandemic, so it seems that he will start doing take-out food deliveries. His father asks Rintaro to come back and help him, but he doesn’t accept.

Rintaro is now in a romantic relationship with Sumiyoshi, but Sumiyoshi has not broken up yet with her Korean lover. Even in the COVID-19 pandemic, Sumiyoshi goes out saying that it is to a dinner party with film directors, but Rintaro feels doubtful about it.

Yamaji’s monologue. Kubo, his childhood friend, has never been able to decide anything, so Yamaji has always decided on his own. Yamaji had begun living with Nagai with the intention of marrying her, but when she says she wants to break up, he is stunned. Yamaji takes a peek at Nagai’s cell phone and is shocked to find an intimate (though not implying real cheating) exchange with Kubo left on her LINE account.

The scene is Rintaro’s father’s house. His father, whom he is seeing for the first time in a year, is once again drowning in alcohol. When Rintaro tries to leave, his father has a violent outburst like in the past. Back in Tokyo, Rintaro sees Sumiyoshi walking along the street talking in Korean on her phone. Rintaro calls Nomi to say he is planning to leave the theater company.

Rintaro desperately pedals his bicycle. The next moment he falls and gets injured, but he realizes all of a sudden that, to him, Tokyo is still a good place, and he isn’t done with it yet.

Theater troupe members gather at the rehearsal studio for the first time in a long time. Nagai says she plans to leave in order to concentrate on tutoring, and Yamaji says he is leaving because he can’t stand being around Kubo any longer. On the other hand, Kubo explodes with a release of the feelings he has always had against Yamaji. As for Nagai, she reveals that the only reason she got Rintaro to join the company was to increase the number of members and in that way reduce the individual financial burdens of the members. Sumiyoshi also says that she will quit because he is going to Korea next year.

Nomi announces that there will be no rehearsal studio anymore due to family circumstances, and finally says that he wants all of them to take roles one more time, with each of them telling their own individual stories.

Finally, the interview scene with Rintaro at the beginning is re-enacted with each of the members playing their real selves.

Born in Hyogo Prefecture in 1976. Graduated from the Performing Arts Academy’s Department of Drama. In 1999, he founded the theater company Modern Swimmers with his classmate Yoshimasa Nishijo (leader) and wrote and directed all of their performances. He has also written stage adaptations of best-selling novels such as Sekai no Chūshin de Ai o Sakebu (Love in the Center of the World) and Tokyo Tawaa~Okan to boku to, tokidoki Oton~ (Tokyo Tower: Mom and Me, and Sometimes Dad). He is highly regarded for his depiction of the subtleties, destiny, and the times that are inevitable in human life in intense multi-character dramas. In 2008, Gachi Boy was released, a film adaptation of Igarashi Den - Igarashi wa Moete iruka (The Biography of Igarashi - Igarashi Is Alive with Enthusiasm?) performed by Modern Swimmers. He won the 53rd Kunio Kishida Drama Award for Mahoroba in 2009, the 20th Tsuruya Namboku Drama Award in 2017 for Haha to Wakusei nitsuite, oyobi, jitensuru onnatachi no kiroku (A Record of Mothers and Planets, and of Women who Rotate) and the 6th Hayakawa “Higeki Kigeki” Award in 2019 for Kieteiku nara asa (Morning Disappearance). In addition, in recognition of its excellence as a theater company, Modern Swimmers won the Excellence Award at the 67th Agency for Cultural Affairs Arts Festival in 2012.