Yohei Hosokawa (born 1978), who also works as an actor, premiered this play in 2022 as a production of in the solo company Horobite, which he presides over as playwright and director. The story centers around a high school student who wakes up one morning to find that her left hand has turned into a knife, and the people around her who are hurt with no such intention on her part. 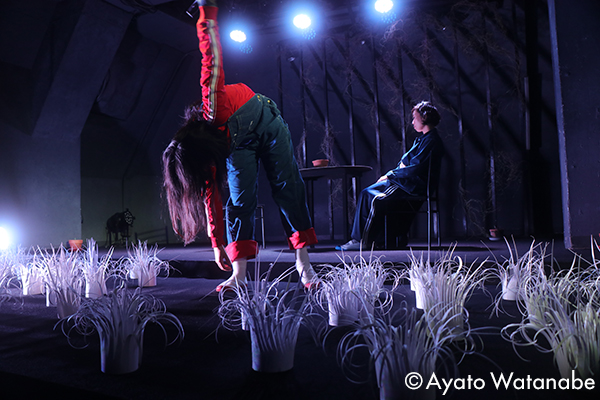 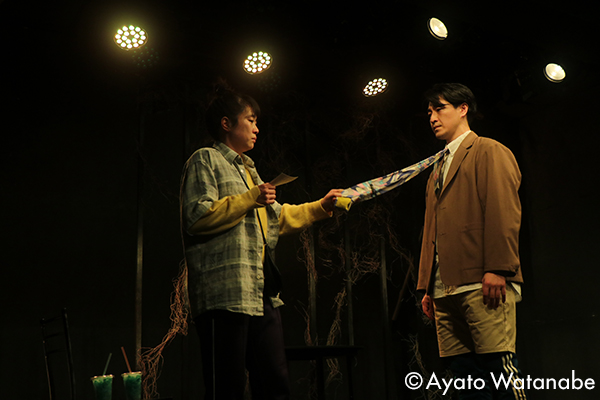 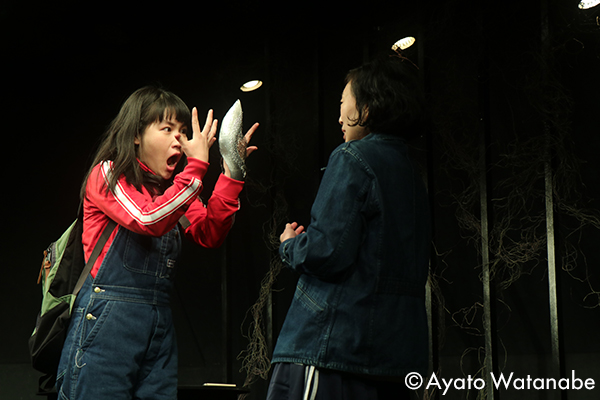 Horobite Plant the Seedlings
(Feb. 16 – 23, 2022 at Shimokitazawa OFF OFF Theatre)
Photo: Ayato Watanabe

The setting is a small apartment where a mother (Mama), who works as a part-time caregiver, lives with her daughter Sayako, who is in her third year of high school and has been accepted to enter an art university.

Mama was surprised to see Sayako holding a knife when she woke up. Sayako doesn’t know what Mama is saying when she accuses Sayako of intending to kill her. After she hears the answer, Sayako finally notices that her left hand from the wrist onward has become a knife, but she still tries to go to a high school as if nothing has happened, because she has never been absent from school even a single day in the past. Mama tells her to cover her left hand with a towel and not to go to the school.

The scene changes to a house where a grandmother, Madoka, who suffers from dementia, is living with her fifth-grade elementary school grandson, Ueru.

Mama goes to the house where she serves as Madoka’s visiting caregiver. Ueru tries to go to school, but as usual he is stopped by Madoka and gives up on going to school, and eventually the three of them end up going out to the vegetable gardens.

Sayako, who has stayed home from school alone in the house, is visited by Mama’s lover Seiichi. He has come to ask Mama for money. To Seiichi, whose visit for this reason is nothing new, Sayako tells him not to see her mother anymore. He becomes suspicious when he sees that Sayako is hiding her left hand with a towel, Seiichi pulls off the towel and is surprised to see the knife. When he still tries to take some money without permission, Sayako inadvertently injures Seiichi.

Sayoko also injured the clerk at the convenience store when she tried to receive her change.

At night, Sayako has put a cover on her left hand and is trying to sleep, but she experiences so much pain at the point of connection that she can’t sleep. Mama hears Sayako’s screams and comes to her bedside, but she is still only concerned about the fact that Seiichi had stopped by her apartment during the day. When Mama asks if anything happened when he came, Sayako tells her that he tried to borrow some money.

The scene changes to a park. Madoka comes to where Sayako is and starts to talk to her about the house and the family that once lived there. Madoka seen Sayako talking with Ueru and mistook her for his fiancé, then Madoka starts crying because she is afraid that Ueru is going to go off with her and leave Madoka alone.

At the apartment. Seiichi clings to Mama and cries, saying that if he doesn’t have money, he’s done. Mama finally says she is going to break up with Seiichi, seeing how he clings to her even though she has told him that she has more money to lend him. Mama is angry at Sayako for speaking out without knowing what was going on inside her, and she forbids Sayako to go out anymore because she is likely to injure people.

Mama goes into a monologue. Mama borrowed money from a friend to have an abortion because the man who made her pregnant ran away, but the day before the operation she changed her mind and decided to give birth the child, and that was Sayako. And having a child eventually gave Mama the will to work.

Madoka talks to anyone who will listen about her memories of the time she lived in New York, where her husband had been transferred. Ueru finds Madoka, but just as he leaves her for a moment, Seiichi arrives. Madoka mistakes Seiichi for her husband, and he is able to trick her into giving him her bank book, cash card and the code number and gets her to tell him where she keeps the cash she keeps hidden in the house. After she willingly complies, Seiichi confesses to Madoka that he is unable to work properly, and then he leaves.

Realizing that she doesn’t have her cash card, when Ueru comes home Madoka suspects that Ueru stole it. When asked by Ueru if she had met anyone, she said she had not met anyone but her husband. Ueru tells her that his grandfather is already dead and shows Madoka a picture of the funeral.

Ueru goes into a monologue. Inside Ueru, there is a twin brother named Uaru who died when they were born. The two of them occasionally have conversations, but Uaru is a violent person, so Ueru tries not to let him come out. Ueru is the biggest among his classmates. He hasn’t been to school since Madoka developed dementia. He says he can live because of Madoka but he also can’t go to school because of her, and he fantasizes about what it would be like if Madoka wasn’t there.

Sayako goes into a monologue. Sayako has decided to use only her left hand-knife to get used to it. Many people probably pretend not to notice the hand-knife. With a hand-knife like this she can’t get any part-time jobs. What should she do pay the tuition for her art college she intends to go to?

Seeing Ueru and Madoka together, Sayako follows them. After they enter the house, Sayoko hears screams from inside. When Sayako enters the house, there was Seiichi, holding an envelope in his hand and bleeding from the corner of his mouth. It seems that he was beaten by Ueru while trying to steal Madoka’s money.

Ueru and Sayako insist that Seiichi return the money, but he only repeats again and again that he will return it someday. Losing control of his strength, Ueru breaks Seiichi’s ribs. Mistaking Seiichi for her husband once again, Madoka confronts Ueru and gives him a slap.

Ueru says that Uaru’s name comes from uranium, and that bad things can happen because of that even when no malice is intended. Sayako blames Madoka for forgetting about her husband’s death just because she has dementia. Sayako calls an ambulance for Seiichi and leaves.

On the way back, Sayako buys seedlings. She decides that one day she will plant them in a place like Ueru’s heart, and that even if he hurts people, he will live and nurture the seedlings.

Born in Aomori Prefecture in 1978, Hosokawa is a playwright, director and actor. At Waseda University he was a member of the Waseda drama club, after which he joined in the forming of the theater company Suiseiongaku and wrote and directed all of its plays until its dissolution in 2006. Also, from 2002 to 2004 he performed as an actor for the company Neko-nya. In 2009, Hosokawa formed the private unit Horobite, and the following year presented its maiden production Iki wo Nonde. Among his noted works are Koen made ato sukoshi (literally: The Park Is Just a Little Farther) (2019) that takes as its motif Becket’s Waiting for Godot and tells a story of people who are waiting for something outside the entrance to a park; Border (2020), a story about a borderline that suddenly appears in the Mochida family home; and this play Control (2021) about people who control and are controlled by a game controller is able to control people’s actions.