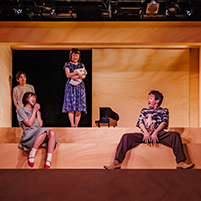 This play is written by Ryo Ikeda (born 1992), who has written works based on themes like his personal experiences of being bullied and family stories. It premiered in 2021 as a production of the creator collective yumei he leads as playwright, director, stage art and video artist. Central to the play are the goddess Hera, who controls motherhood, and the goddess Yuno who protects marriage. Two mothers became relatives when their children married, and their stories string together fragmented recollections to paint a picture of the ongoing lives of the families shaped by differences deriving from the presence or absence of blood ties, the individual upbringings and values and the differences between the generations. At its premiere, this nested play had a total of 20 scenes, including the prologue, and the performance made clever use of a moveable set built on three levels of boxes one on the other. 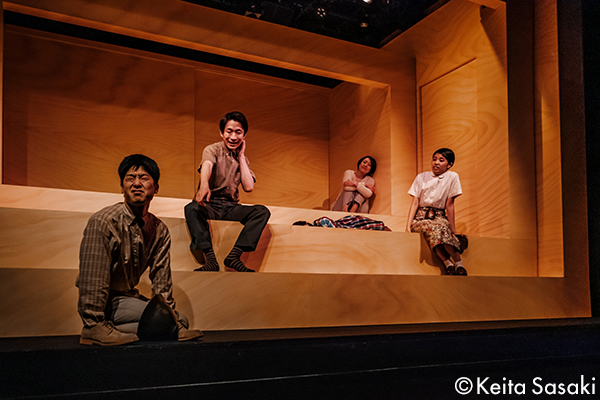 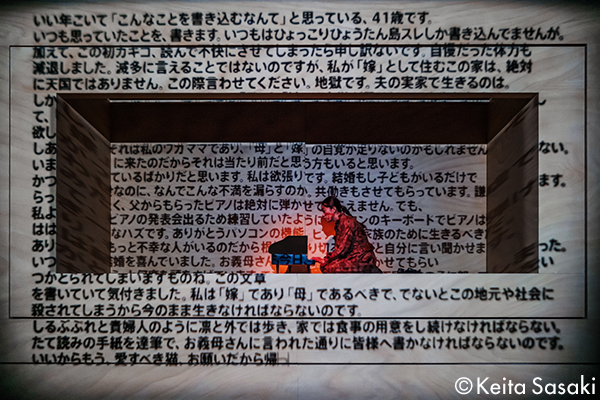 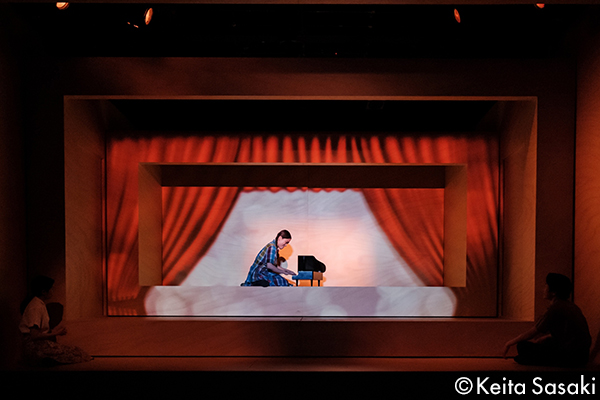 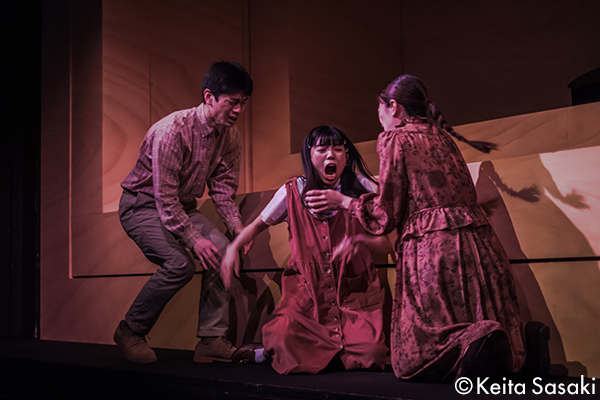 Prologue
The actor playing the character “Herako” comes on stage claiming to be the author of Musume (Daughter/Girl) and explains that the play was written just before he and his wife “Yunoko” were going to be blessed with a baby girl, and that the contents were based on research into her parents and grandparents.

Act 1
To the home where the couple “Herako” and “Yunoko” live, the parents of the wife Yunoko, “Yuno” and “Yunoo” come to have dinner with them. The husband Herako’s parents, “Hera” and “Herao,” who are separated, also join the dinner remotely via an online connection. Herako has prepared a shrimp dish that his parents-in-law love, but he has a dislike for shrimp and becomes nauseous after shoveling some down anyway, so and has to run off to the toilet.

Act 2
The two mothers, Yuno and Hera are talking about the amicable breakup of married couples. Yunoko announces to them that she is going to have a baby girl. While taking a walk after the dinner, the couple Herako and Yunoko talk about things like their parents’ living separately. Yunoko suggests that like their mothers, their soon to be born daughter will also have to bear a lot of things she doesn’t like someday.

Act 3
Hera’s father appears in her dreams. He tells her that when he was young he sold marijuana with the Yakuza gangsters in Hokkaido in 1949.

Act 4
Yuno’s father appears in her dreams. In 1964, her parents lived in Gifu prefecture and they argued about a cat that came to their yard. As a child, Yuno learned piano from her father.

Act 5
Hera’s father had gotten involved with one of the Yakuza gangster’s women, and his older brother got very angry with him over this. Herako had been teased for calling a red crayfish green, and it becomes clear that he had inherited color blindness from his father.

Act 6
As a child, Yuno cried when she couldn’t play well at a piano recital. Her parents had a fight over this, but that ended when they found the dead body of the cat in their yard.

Act 7
As a child, Hera was hit by a truck. That led the family to move to Tokyo, where her mother’s family home is.

Act 8
The year is 1980 in Gifu Prefecture. Yuno and her husband visited her father. Her father, who is now separated from her mother, asks if she still plays the piano, and it appears that he is showing symptoms of dementia. When they get home, her mother-in-law says disagreeable things about the piano, about Yuno having a job outside the home, and about the fact that she is thinking about getting a cat as a pet.

Act 9
The setting is the year 1989 in Tokyo. Hera, who worked as a civil servant before her marriage comes home from drinking with her husband to find her father with a Yakuza that he introduces as a fellow worker, and they all start drinking again.

Act 10
The setting is 2001 in Gifu Prefecture. Yunoko feels more affinity with her mother-in-law than with her own mother. Yuno calls her father and says that she had a daughter because she wanted someone who would be on her side, but now the only ones who take her side are her cat and the internet. Yuno drives her husband and daughter to her piano lesson. Her daughter keeps saying that she wants to try to win something from the capsule toy machine, but Yuno tells her she has to wait until after her lesson. Then Yuno and her husband decide to go see a movie until the lesson is over.

Act 11
The setting is Tokyo in 2001. Hera and her husband are looking for Hera’s father. It appears that in order to pay off his debts, her father has been supplementing his welfare payments by doing work for the Yakuza. Hera wants to take over her father’s debt and bring him home, but her husband stops her. When Hera says that he is part of their family, her husband tells her to go back to their child, and he goes off with the gangster.

Act 12
Yuno and her husband go back to pick up their daughter from her piano lesson. When they go to the capsule toy machine and find it is sold out, Yunoko cries and says, “My Grandma would have let me get it before my piano lesson.” After returning home once, her husband sets out to drive to another place where their daughter can use a capsule toy machine, but by accident he runs over the cat. Yunoko blames her mother and cries again. Unable to contain herself, Yuno blames Yunoko for having drawn a picture of a cat as an angel. Yuno’s mother-in-law speaks comforting words only to her granddaughter and her son.

Act 13
We see the computer screen of an anonymous chat website for married women. Yuno’s typing on the keyboard is accompanied by the sound of piano music. Yuno pours out words of loathing towards her mother-in-law. In answer to this, Hera writes a comment that she should play the piano. The two go on writing email complaints to each other.

Act 14
A nightmare causes Yuno to cry out in her sleep, and her husband wakes her up. Even when she tries to explain the contents of the dream, all her husband tells her is stop spending so much time on her computer so she can get to sleep earlier.

Act 15
The setting is 2005 in Tokyo. Learning that her father is apparently living on the streets now, Hera tells him to come and live at her home, but her father refuses, saying she has a family to care for.
The setting changes to the year 2011 in Tokyo. When Yuno calls her father to find out how he is doing, he says he wants her to come over in the evening, but she answers that it will be hard because she is still working.
At Yuno’s father’s funeral. Yuno asks her husband why her mother-in-law didn’t come to the funeral. In a monolog, Yuno confesses her dislike for her mother-in-law, and goes on to say that she will build a house on the lot where her father’s house had been, so she can live there alone.

Act 16
Hera tells her husband about how she found her father dead in the apartment room he had lived in, his lower body rotted with gangrene. She tells her husband that from now on she will do what she wants to do alone, and he accepts.

Act 17
The setting is 2021 in Tokyo. The site is a gallery showing Yunoko’s animation work. Herako has learned that he has been diagnosed with an allergy for shrimp. The animated film consisting of a collage of Yunoko’s memories, such as the tricks played by a cat angel, is shown.

Act 18
The showing of the animation film ends, and as the audience leaves, Yunoko waves goodbye to her mother.

Act 19
The setting is 2021 in Gifu Prefecture. Yuno is writing something on the anonymous chat website. The sound of the keyboard touch turns into the melody of the piano piece A Maiden’s Prayer. Yuno types a message that after retirement she wants to enjoy her remaining life, and that when she dies, she wants to be alone. In response, Hera writes a message of agreement with her. We hear a cat’s voice: meow.

Born in 1992, Saitama Prefecture. Ikeda is a scriptwriter, playwright, director, visual artist, and actor. He graduated from Tokyo University of the Arts and went on to graduate from the Department of Sculpture in its Graduate School of Fine Art. In 2015, he became a founding member of the creator collective yumei, serving as its representative, writer, director, stage artist and video creator. Ikeda is known for works that take actual personal relationships as starting points from which adjoining spaces and stories are depicted, as with his representative work Aka (Red) in which paintings done by his grandfather are shown and his own father performs with him as an actor duo. While pursuing activities that analyze non-genre multi-faceted creation, Ikeda has also been writing numerous scripts for other theater companies, TV dramas and animated films, music videos and other video works. Among his representative works are Ototoi (Brothers), a play based on Ikeda’s personal experiences of being bullied at school (premiered and re-staged in 2017, and again in 2020); Aka (Red), a play about his family with his own father performing on stage with him (2018); Sugata (Shape) (premiered 2019, re-staged in 2021), among others.