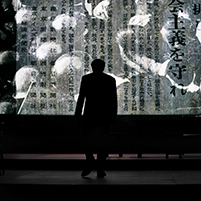 The year 2021 opened with a mood of excitement over Tokyo’s approaching “Recovery Olympics,” as it was dedicated in the wake of the 2011 Great East Japan Earthquake and Tsunami. The newspaper reporter, Ichiya, who has continued to write a series of articles about the disaster-stricken region and how it is still far from recovery, has been told by the paper that his series will be discontinued. Two generations earlier, Ichiya’s grandfather, Goro, had his article about the mysterious death of a female Tokyo University student, Michiko Kanba, in the 1960 protests against the Japan-US Security Treaty abruptly rejected before publication, leading to his resignation as a newspaper reporter. In this seeming intersection of events in the two different eras, Ichiya begins to trace the events involved in his grandfather’s investigation that eventually ended with its silencing, while also questioning his own position as a journalist. The play’s titled is derived from a poem by Kanba titled The Smile Nobody Knows. 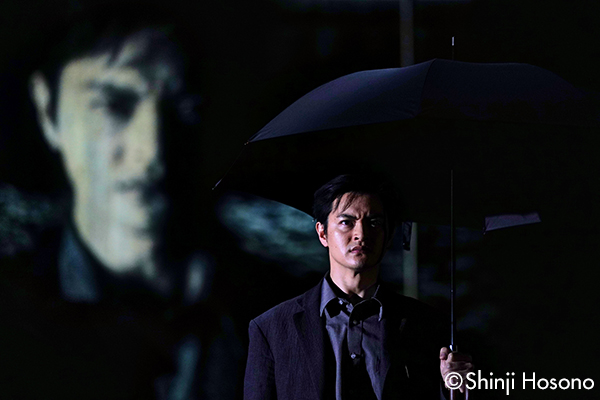 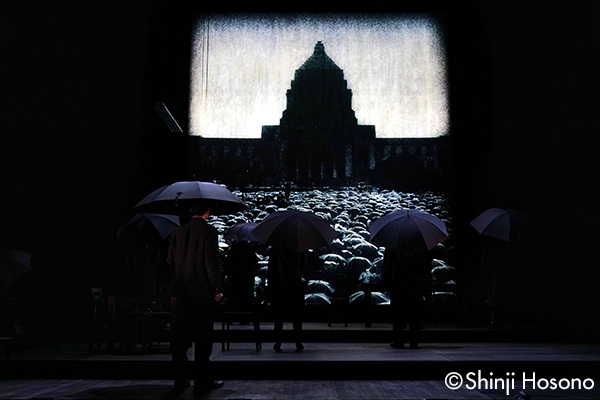 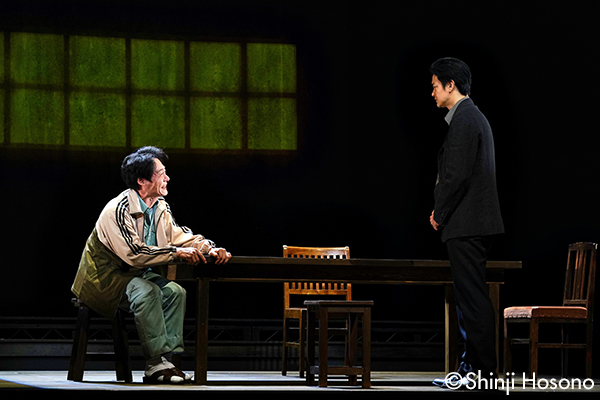 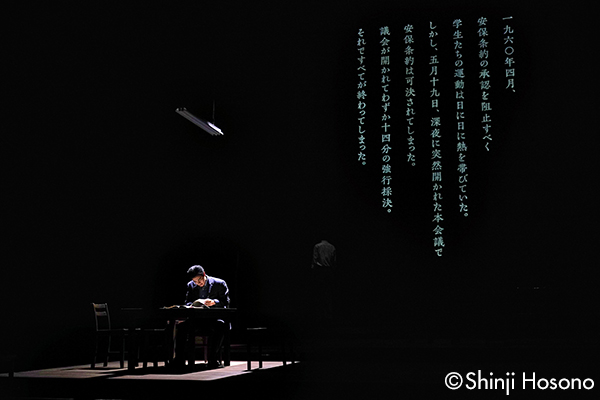 Even If There Are People Who Laugh at Her (Kanojo wo Warau Hito ga Itemo)
(Dec. 4 – 18, 2021 at Setagaya Public Theatre
Photo: Shinji Hosono

The date is June 16, 1960. People carrying black umbrellas gather quietly and begin walking toward the National Diet Building. A single newspaper reporter begins walking in the opposite direction from the crowd.

The setting changes to the year 2021. As the world is thrown into confusion by the COVID-19 pandemic, Japan is working toward the one year delayed holding of the 2020 Tokyo Olympics and Paralympics. The newspaper reporter Ichiya has for years been covering the stories of the survivors of the Great East Japan Earthquake and Tsunami.

The Iwai family are victims of the 2011 disaster that Ichiya has spoken with periodically since they were forced to evacuate the disaster area to a temporary housing location. The father is ill and can’t work, the eldest son has had to seek employment back in their former hometown to support the family, since the temporary housing agreement has expired. The younger sister takes care of her father while working part-time. The family’s life is still far from the promised recovery of the region.

One day, Ichiya is suddenly informed that he is being transferred from the local news section where he has long worked. He appeals to his section chief that if he can’t continue to write about people like the Iwai’s, no one will hear about their dire state. The answer he gets in return is that the company wants to start building a more optimistic mood since the Olympics are coming.

It is around that time that Ichiya hears that his grandfather, Goro, who had been a taxi driver, had previously been a newspaper reporter, but had resigned that job in 1960. Ichiya had never once heard his grandfather speak about that part of his past. In time, their two stories had come to intersect, linking the two eras of 2021 and 1960 in an unexpected way.

As a reporter in 1960, Goro had been covering the story of students who were protesting the revision of the U.S.-Japan Security Treaty. As the protests became more intense and violent, one female college student died in one of the demonstrations. Goro was intent on uncovering the unknown truth about how she died. The media was intent on criticizing the violence of the student protestors, but the more he interviewed the mother of the deceased student and the doctors who were present at the judicial autopsy, the greater his suspicion grows that the cause of her death was not being trampled to death by the crowd, as claimed, but rather from strong blows by the riot police clubs.

Meanwhile, preparations were being made at the top management level for the seven major newspaper companies to issue a “Joint Seven-company Statement,” regardless of their leftist or rightist leanings, to “Condemn violence and defend parliamentary government” with the aim of helping to quiet down the confrontation. In response to this, Goro negotiate directly with the chief editor to stop their paper from printing the joint statement on the grounds that its contents were a one-sided blaming of the students for the violence and thus a blatant violation of the press’ obligation to maintain neutrality and independence in their news content. The cynical chief editor replied that, “In the end, this country has no consistent policies. The only way for us to survive is to accept the contradictions as contradictions. So, become a revolutionary if that suits you.” To which Goro responded, “You have no right to be handling words at all,” at which he immediately quit the newspaper.

The year is 2021. Ichiya visits the eldest son of the Iwai family, Shunsuke. “Some of the other evacuees have been able to relocate and establish new lives elsewhere. I guess I’m just not as strong as them,” says Shunsuke regretfully. Formerly, he had found work in (radioactive soil) decontamination in the disaster area, and now he is working to recycle decontaminated soil, so he can’t say that the Recovery Olympics are a complete false.

In fact, the recovery has involved little more than cleaning up the areas that the pre-Olympic Torch Relay will pass through. Seeing a newspaper article hailing the “Recovery Town, the Torch is Lit” on the internet, Shunsuke bursts out in anger and write a comment on the web page, “That town is just a superficial sham. Don’t forget that the people who used to live here are still unable to return to their homes.”
But, in response to his comments, others write a barrage of comments criticizing him, like: “Don’t spread harmful rumors,” or, “People like you who talk about insecurity are fools who lack access to the right information.” And these fruitless exchanges with people he can’t see drive Shunsuke deeper into anxiety.

Worried about her older brother, the younger sister, Risa, arrives and tells him that even though Ichiya has been transferred and no longer has a place to run his articles (about the recovery), she hopes they will continue to let him come to do his reporting. Risa smiles as she says, “I want to start again from the place that we lost, so I hope we can think together about how to do it.” 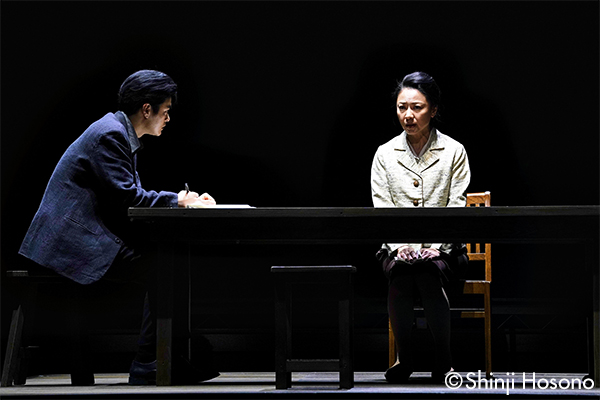 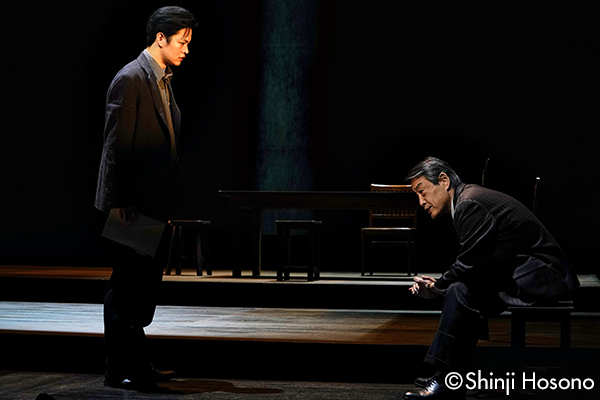 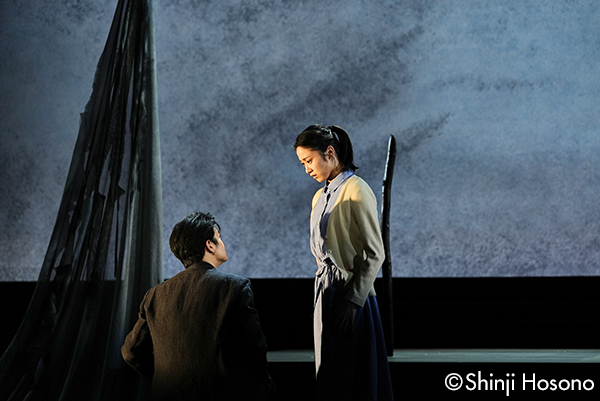 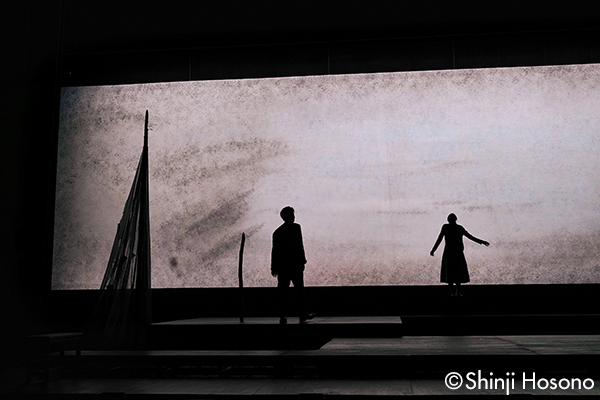