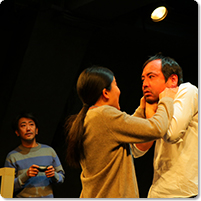 This play premiered in the opening performances in 2021 of the solo theater company Horobite founded by its leader, playwright and director, Yohei Hosokawa, who is also active as an actor. This work tells the story of man who comes into possession of a game control that is capable of controlling people as well. Using it, he begins to control people around him with fear and violence…. 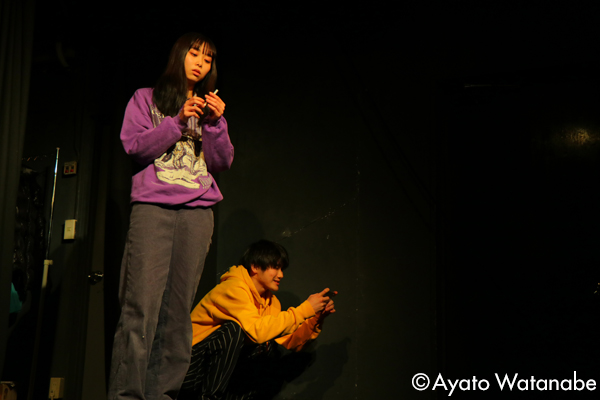 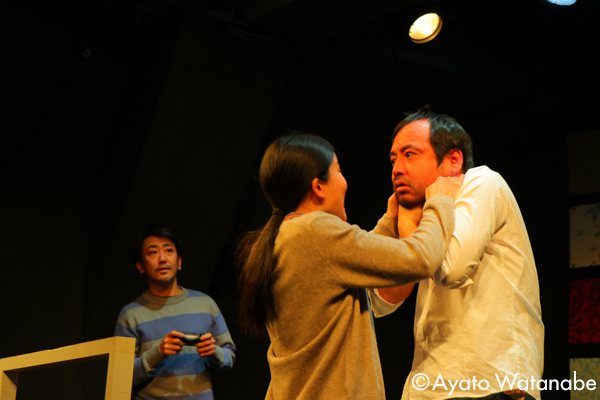 In a room in condominium, a man named Nagatsuma and his partner Urui are playing a video game. Suddenly, Urui’s arms begin flailing uncontrollably. It seems that, for some reason, her actions are synched with those of the game character Nagatsuma is operating with his controller. As Nagatsuma begins to play with this newfound control, Urui gets angry. She takes the controller away from him and then begins to use it to control his actions in the same way.

In a coffee shop. The shop manager, Imamichi, tells his part-time worker, Shisuku, that her contract will end at the end of the month. Shisuku listens with a smile at first, but eventually she breaks down crying and pleads that she won’t be able to live without this job. Imamichi tells her that if that is the case, she should come to his place, and he pulls her to him and embraces her.

The scene shifts to Imamichi’s condominium. Imamichi introduces Shisuku and her younger sister Kako to his younger brother Kawahagi, who lives with his brother in the same condominium. Imamichi leaves the two women with Kawahagi and returns to his shop. The two explain to Kawahagi what has happened. It turns out that Shisuku and Kako have no place to live and have been sleeping in Internet cafes. It becomes clear that Kawahagi and Kako are not ones who will get along very well, but the two women are happy that they now will be able to live in this condominium.

(From this point on, the story shifts back and forth between Imamichi’s and Nagatsuma’s condominiums in the same building.)

Nagatsuma is being manipulated around under Urui’s control. He has a gaze bandage around his head. It appears that they have been practicing how to control people with their controller, and they are having difficulty mastering the technique.

Nagatsuma speaks in monologue. He relates his memory of being bullied in middle school and under threat of punishment, the bullies took his money and his video game player. He asks himself it had really been under his own will that he gave up those things.

Nagatsuma and Urui have just finished practicing with the controller. Nagatsuma gets a thrill out of the feeling of being controlled in this way.

In Imamichi’s condominium, Imamichi looks happy, proudly carrying a promotion notice. When Shisuku comes in, he tells her that he has been promoted to area manager, and then whispers that he will now teach her what she must do.

Nagatsuma uses the controller to make Urui raise one of her arms. Insisting that he wants to teach her the pleasure of being controlled, he commands her to hit herself. Urui implores him to stop. Nagatsuma has reached the point where he will no longer give up the controller, and he claims that it is because someone else is controlling him.

Imamichi tries to convince Shisuku that he will teach her the proper attitude a woman should conduct herself with. Shisuku doesn’t really understand what he is trying to do and objects to his statements at times, but in the end, when Imamichi tells her that they should work hard together to succeed in live, she agrees to follow him.

Kako speaks in monologue. She talks about the events that have ensued. Kawahagi is forced to cut his own Achilles tendon and his arms, Shisuku was taken into another room and violated, and Imamichi was forced to dance. After a few months they have lost the will to resist. Nagatsuma has meanwhile come to use electric shocks as a new form of control.

Nagatsuma uses the controller to torture the four of them as if playing a game. Kako tries to run away but fails and ends up being confined to a separate room. Imamichi has gone incomprehensible in his speaking and actions.

Nagatsuma returns with Kako, whose body is now covered in bruises. Nagatsuma orders Kawahagi to break one of his own fingers, but Kako says she will break her own in his place. Unsatisfied, Nagatsuma now commands the others to each break one of Kako’s fingers, and no one obeys. Nagatsuma does it himself, using the controller.

Out on the verandas, Kako meets Urui on the neighboring veranda. Kako says that no matter what the circumstances, in the mind one is always free. Kawahagi comes out to say that Imamichi isn’t breathing. When Kawahagi says he wants to be free of any more of this torture, Kako tells him to keep breathing.

When Kako and Kawahagi return to the room, Imamichi is sitting in a chair smiling. Imamichi talks about his desires and the fact that he believes men should be dominant over women—it turns out to be a memory from Kawahagi and Kako’s past.

Urui leaves. But is it into the outside world that she departs, or something else ….

Born in Aomori Prefecture in 1978, Hosokawa is a playwright, director and actor. At Waseda University he was a member of the Waseda drama club, after which he joined in the forming of the theater company Suiseiongaku and wrote and directed all of its plays until its dissolution in 2006. Also, from 2002 to 2004 he performed as an actor for the company Neko-nya. In 2009, Hosokawa formed the private unit Horobite, and the following year presented its maiden production Iki wo Nonde. Among his noted works are Koen made ato sukoshi (literally: The Park Is Just a Little Farther) (2019) that takes as its motif Becket’s Waiting for Godot and tells a story of people who are waiting for something outside the entrance to a park; Border (2020), a story about a borderline that suddenly appears in the Mochida family home; and this play Control (2021) about people who control and are controlled by a game controller is able to control people’s actions.