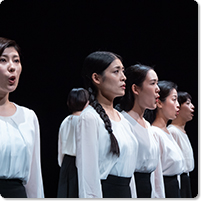 Satoko Ichihara, leader of the theater unit Gekidan Q, wrote this play that takes themes of the ancient Greek tragedy Bacchae by Euripides to examine various aspects of contemporary society, from love and sex, man and woman, intermixture of different species, discrimination and abuse, to artificial insemination, criticism of anthropocentricism and more. It was the winner of the 64th Kishida Drama Award. It premiered at the Aichi Triennale in 2019 as a performance with an all-women cast, including the chorus. 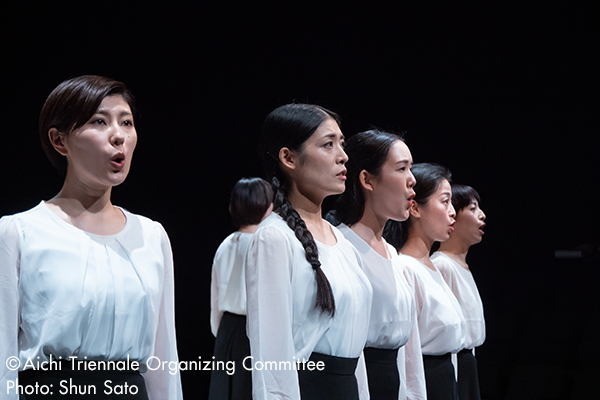 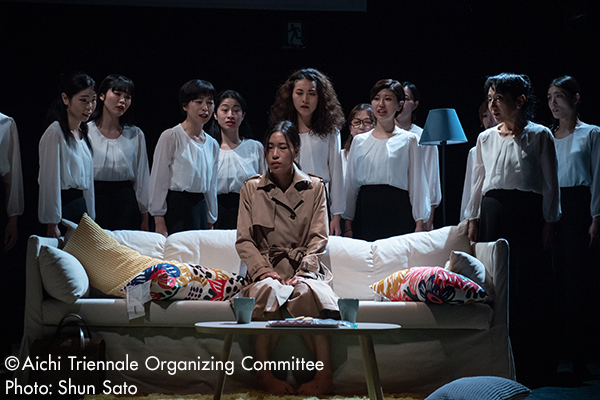 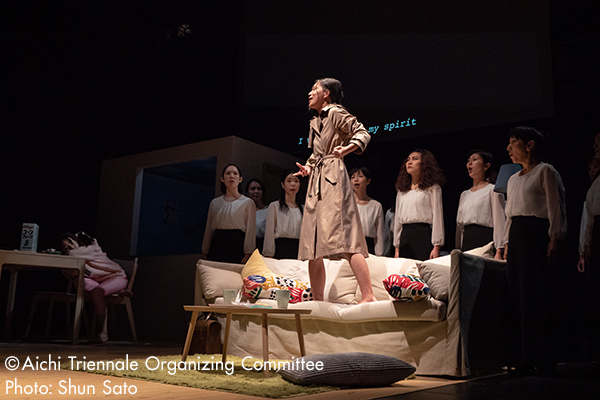 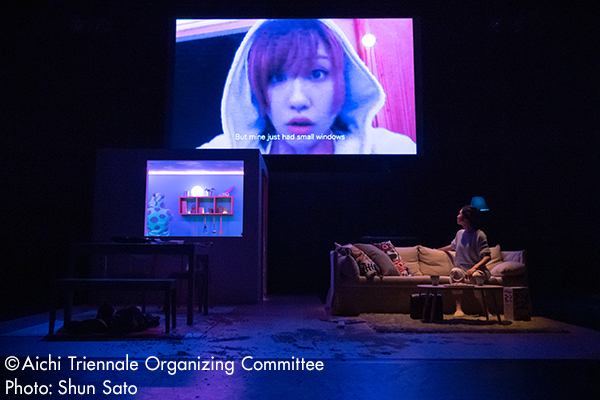 In a dining room that looks like an IKEA showroom, the main character, Woman (housewife), is preparing Korean barbeque for dinner.

A night one of those years.

In a three-way love-making encounter between one man and two women, the Woman found herself in the arms of the other woman who looked almost identical to herself. The pleasing touch of the soft body of the other woman, gave her a feeling as if she were holding herself. Until then she had been made to hold many hard things, but now, in this moment, she felt that she was able to give pleasure to the other woman and to herself at the same time. She felt a sense of perfect redemption down to the core of her being.

Heading for home on the first bus in the morning, an unidentifiable person sat down in the seat next to her. “I’m going to be killed!” the Woman thought. Gripped by fear, she thought she was going to be punished for the pleasure she had experienced with the other woman that night. But nothing happened.
That night’s events made the Woman decide to have a child.

Semen could be bought online from overseas donors. The cost was about 100,000 yen. Your preferred donor could be chosen from records of the male donor’s race, skin color, education and affiliations, and the semen would be delivered by air freight. Due to an unconscious discriminatory attitude that came from knowing a classmate in junior high school who had a black father and yellow (Japanese) mother and had been bullied under the nickname “Centaur,” she chose the semen of a Japanese man.
The chorus (souls of cows) comes on stage and begins to sing.

A call bell rings.
A half-human, half-beast figure wearing a long coat appears at the Woman’s house leading her dog “Hawaii” that had gone astray. The human beast is from an all-female commune in the mountains. It says to the Woman, “My soul is weary.” “I am possessed by the resentment of the cows.”

The human beast sings to the chorus.

“I want to impregnate my mother with my seed so that she can give birth to my reincarnation and I can feed from her breast. In doing so, I want to save my soul and the soul of my mother.”

The human beast says that the cows are born through the unwanted, intrusive process of artificial insemination and then raised as the humans dictate. That is where their resentment comes from. So, the beast wants to ease their anxiety by giving them butter massages and inseminating them repeatedly, until they are reborn with new souls. It says that it also wants to save the Woman “fundamentally.” But the Woman rejects this brainwashing and refutes the beast, saying, “This is mere deception, you’re a fraud.”

The origin of the beast is revealed.
With no serious intent, the Woman injects the semen she bought over the internet into a cow’s uterus. What was then born was a beast with the upper body of a human and the lower body of a Holstein.

The beast removes its coat to reveal its lower body. There is a sex organ with a large clitoris that can emit semen.

The Woman is obsessed with a desire to meet and to touch that night’s woman again, so she goes to the happening bar. But that woman isn’t there. Instead she goes to a “play room” with a girl who has a lesbian desire. The girl gets excitement from being watched men who pay to peek into the room and starts moaning like an adult movie actress. The Woman follows suit by acting like an adult movie actor. But she becomes discouraged and says, “I was defeated by the man I have nurtured inside me.”

Taking the first bus in morning home, an unidentifiable person sits down next to the Woman.

Without returning, the Woman goes on to marry her present husband. She says that she wanted to live comfortably in a safe system of daily life as a housewife supported by her husband.

Meanwhile, the Woman’s half-human beast child that was deserted by her at the age of three had been able to use its bovine instincts to eat the tatami mats of the house to survive. In time, complaints about a stench coming from the house lead to the beast child being discovered by the landlord. The child is able make a living as a sexually experienced half-human, half-Holstein selling its favors at a high price to clients with perverted tastes. And when it goes by chance to an expensive Korean barbeque restaurant and eats meet as a human, its Holstein blood gets over-excited and it begins to eat salad instead. Despite these contradicting impulses, the child has no other means to live by.

The Woman’s sex life.
As the Woman is ironing at the ironing board, her husband leans over her from behind. She accepts her husband’s sexual longings without objection. It’s like collecting semen from a seed bull. A seed bull never ejaculated in the womb of a cow. Its semen is only collected, frozen and sold. There is no love in the act of propagation.

Hawaii begins to cry, the chorus begins to dance wildly, and the Woman becomes half-crazed.

The beast tells the Woman (mother) that there is a woman that looks just like her at a ranch in the mountains, inviting her to come see.

The woman that looks like her is very good at giving butter massages. The Woman wants to enjoy the soothing effects of a massage, so she takes the beast’s suggestion and heads off to the ranch after putting on a “big clitoris.”

The beast is sure that there it will be able injects its own semen into its mother’s womb.

Hawaii, who had followed the beast and the Woman to the ranch returns and reports to the chorus.
The Woman got a butter massage at the ranch. Then the beast tried to inject its own semen into the Woman, but she resisted and snipped the beast’s penis off.

The beast returns and says, “Having lost my penis seems to have taken a bit of weight off my shoulders,” and then leaves.

The Woman returns home with the beast’s penis.

She asks the chorus, “Can the penis of a bull be eaten?” The chorus sings about the Centaur running around laughing.

The Woman and Hawaii wait for the meat to be cooked.

Playwright, director and novelist, Ichihara was born in Osaka in 1988 and grew up in Fukuoka prefecture. She studied theater at J. F. Oberlin University. From 2011, she has led the theater unit “Q.” Ichihara is known for creating and directing dramas that deal with human actions and the discomfort of the physiological needs of the body with a distinctive use of language and physicality. In scripts that treat with frankness the subjects of sexuality or intercourse and interbreeding between different species or races from a female point of view, the audience can be showered with words that are physically stimulating and the actors on stage may use devices like caricature or at times showing their own faults as they act out the script with full physical output and expression. Her plays to pose questions about the validity of the way subjects like sex and breeding have conventionally been defined from a male-centric or human-centric perspective but now becomes invalid, and she can also use radical means to question the ethical and moral perspective that have been defined for society’s majority.
Ichihara has been a Junior Fellow Artist of the Saison Foundation.
In 2011, Ichihara won the 11th AAF Drama Award for her play Mushi (Insects). In 2020, Ichihara’s play The Bacchae – Holstein Milk Cows won the 64th Kunio Kishida Drama Award.
In June of 2019 Ichihara’s short story collection Mamito no Tenshi was published by Hayakawa Publishing Corporation.