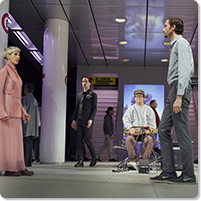 This play was created by Toshiki Okada in collaboration with German actors as a repertory play for one of Germany’s leading public theaters, Munich Kammerspiele. Adopting the traditional Noh (NŌ) theater style, this is a contemporary Noh play consisting of two Noh acts with an interim Kyogen piece. It premiered in Germany in February of 2017 and was restaged in Kyoto in July of 2018. The setting for the play is subway train platforms in Tokyo. Appearing in it are a departed spirit of the bubble economy and a ghost of feminism, in a story that sheds light on a contemporary Japan swallowed up in the forces of capitalism. 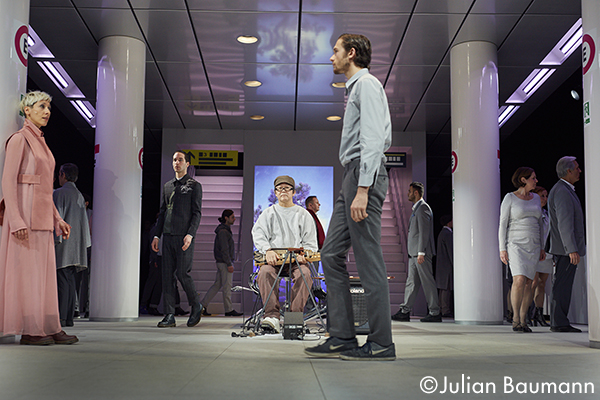 A young man appears (in the Noh Waki [supporting] role). Near midnight, the young man wanders the city of Tokyo aimlessly, riding the subway system. From time to time, impulse moves him to wander the city center this way without purpose or reason.

He gets off the subway at Roppongi station, a place he has no relation with, past or present. A man appears (in the Noh Shite [leading] role) and speaks to the young man, saying, “There is something I want to ask a young person like you.”

He asks, “How does it feel? To be a young person in a nation in decline; a youth in an environment where there is nothing to look forward to in the future?”

To this, the young man can only reply, “I don’t really feel anything. Because, that’s the given situation for me. It’s the society’s default state.”

When the young man complains that he feels pressured being questioned in this way, the man replies, “I have no right to question you.” The man was a dealer at a city bank. He informs the young man, “You are here because I summoned you here.” As he leaves the stage the man says that he wanted to talk to make amends for his past sins.

A station employee ( Ai [counterpart/connecting] role, also a member of the Noh chorus in this case) asks the young man if he is OK, explaining that he was concerned seeing the young man wandering around alone. When the young man explains that he had just been talking to an older man who suddenly appeared, the station employee informs him that it was the ghost of a man who committed suicide here ten years earlier by jumping in front of a train.

The man ( Shite ) appears again, wearing a Noh mask, and begins to speak. He explains how the Plaza Accord for international currency stability of September 1985 resulted in inflation of the value of the yen that in turn triggered a period of recession. Then, lowering of interest rates to encourage domestic demand and consumption resulted in Japan’s crazy Bubble Economy. He goes on to explain the process by which the Roppongi club and entertainment district prospered amid the rapidly growing false wealth of the Bubble until it all collapsed.

Thirty years has changed Roppongi into a barren wilderness. The man says how he has watched this process from a tower high above. “There was nothing I could do,” he says. “But it may there was something I could have done, but I just didn’t try. And if so, wasn’t that a sin in itself?” The man leaves, and then the young man goes up to the street level to take a look around Roppongi.

An actor enters. She introduces herself as a stage actor living in the neighborhood and then launches into a long monologue.

She complains about the difficulty of memorizing long monologues on the way to the rehearsal studio, and she has harsh words for playwrights who mercilessly write those long lines. Finally she reaches the subway station. While waiting on the underground platform for the train to come she says what a good place it is for memorizing her lines, and then starts mumbling the lines of Gertrude from the play Hamlet she is now rehearsing.

Using one of the line of pillars on the platform as an imaginary partner, the actor begins a discussion about methods for memorizing lines. “I heard about a way of learning lines by writing them out over and over, and I wanted to try it.”

“But, I heard about an actor who used that method wrote so much that they got tendinitis.”

“Oh, no! Then they couldn’t memorize their lines anymore, could they.”

“It’s no problem. Voice input technology has gotten so good recently that they can write pretty accurately just by speaking the lines into their computer, couldn’t they?”

A young man (Noh Waki [supporting] role) introduces himself as being born and raised in Hiroshima and has now come to Tokyo for the first time for sightseeing. He says he wants to visit the skyscrapers in West-Shinjuku. He also wants to see the Park Hyatt hotel there that was used as a setting in the movie Lost in Translation , then finally he arrives at the Tocho-mae subway station in West-Shinjuku.

As he is confused and unable to find which exit goes to the Tocho (Tokyo Metropolitan Government Building), Woman 1 ( Shite ) appears and tells him he should use Exit A3. The young man tells her that he wants to go up to the Observation Decks at the top of the building and that he then wants to go see the bar in the Park Hyatt where scenes were filmed for the movie.

Woman 1 speaks. She tells the young man that the Tokyo depicted in that movie is simply decoration designed to amplify the solitary loneliness of the two American main characters. She goes on to say that this city and this country also alienates the Japanese, in a different way from the way it alienates foreigners.

Woman 1 begins to talk a woman originally from Hiroshima who was elected to the Tokyo Metropolitan Assembly at a young age. Then she recommends that the young man go to see the woman who stands in the Citizens’ Square facing the National Diet Building. As a man, you should go and see that woman, she adds. He suddenly feels a chill in the air on the platform, and the next thing he knows, Woman 1 has disappeared.

A station employee ( Ai [counterpart/connecting] role, also a member of the Noh chorus) comes up to talk to the young man. When the young man says that he suddenly feels a chill in the air, the station man asks, “Did you see ‘that woman’?” There is a rumor that a female ghost appears on this platform sometimes. There was an incident some years ago, when a young female Member of the Metropolitan Assembly was hackled during a speech by male Assembly members, with chauvinistic jeers like, “Can’t you even have children?” It was just after that the rumors about the ghost started. After that incident, it came to be called the ‘ghost of feminism’.

The young man goes to the Citizens’ Square. Woman 2 ( Tsure [co-actor to the Shite ] appears and says, “That day, she was shamed in the Assembly, I was shamed in that Assembly. But the incident was never settled and we lost our chance for redemption.” As the young man watched, Woman 2 appeared to be overcome by some force.

Woman 1 appears again and tells her true identity. She is a ghost formed as an embodiment of the awareness of women living today of all the regrettable abuse suffered by the women of the past in their lives. And in order for their grievances to be consoled, the mechanisms of this city and this country have to change. Until that happens, their will never be redemption for their collective souls.

The young man climbs the stairs out of the subway toward the Metropolitan Government Building.

Born in Yokohama in 1973 and lives in Kumamoto. Playwright, author and leader of chelfitsch. As an artist, he is the focus of attention in Japan and from abroad for the ways his work are seen to overturn many of the conventions of traditional theater. In 2005, his work Five Days in March won the 49th Kishida Drama Award. The physical presence and movement that typified Okada’s directing came to be recognized as a form of dance, and in 2005 his dance work Air Conditioner (Cooler) was chosen as one of the finalists in the TOYOTA CHOREOGRAPHY AWARD Nextage Choreographer award. In 2007, Okada made his debut as a novelist with the collection of short stories titled The End of the Special Time We Were Allowed was published in February 2007 and awarded the Oe Kenzaburo Prize. He has been on the judging panel for the Kishida Kunio Drama Award since 2012. In 2013, his first book on theatrology was published by Kawade Shobo Shinsha, and in 2014 his collection of plays titled Genzaichi was published by Kawade Kobo Shinsha. Okada has widened the sphere of his activity to art exhibitions as well, beginning with a video installation titled Four Unremarkable Things You See at Train Stations exhibited at the Museum of Contemporary Art Tokyo in 2014, and from 2015 he handled some of the curatorial duties for part of the special exhibition space at the same museum, and in 2016 he exhibited in the New Works exhibition in the Saitama Triennale, etc. He has also ventured into a new medium he calls EIZO Theater (video theater) and in April of 2018 he held his first full-scale exhibition at the Contemporary Art Museum, Kumamoto titled Beach, Eyelids and Curtains: chelfitsch EIZO-Theater . Okada was in charge of the script and direction for Wakatta-san no Kukki in the children\'s program at the Kanagawa Arts Theater in the early part of 2015. In the same year, he staged God Bless Baseball , his first play based on Japanese-Korean collaboration, as the opening program at the Asian Culture Center in Gwangju, Republic of Korea. In 2016, he prepared and staged in a silent way as a performance project jointly with dancer and choreographer Mirai Moriyama under the curation of Yuko Hasegawa at the Setouchi Triennale. In the same year, he began a commission to direct works in a repertory program at the Munich Kammerspiele, one of foremost public theaters in Germany, for three consecutive seasons.