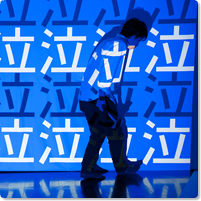 Presented in 2013 by playwright and director Suguru Yamamoto (born 1987), this play won the Best Play and Best Script awards at the Bangkok Theater Festival 2014. The setting is Tokyo in 2013, at a time when a series of rape-murders of young girls has been occurring. The characters include a “Sister” who lives with her rich husband and small daughter in a luxury tower apartment, her impoverished “Younger brother” and others including a “Man,” who is her former boyfriend and now spends his time wandering around in search of an “Enemy.” The stories that unfold around them express the air of anxiety that hovers over contemporary life as well as the blessings life can bring. In the play, the roles of the “Man” (former boyfriend), the “Younger brother” and his “Sister’s husband” are played by two actors, while the other characters (including the child in the womb, the sister, mother, etc.) do not appear on stage. Instead, their lines appear as text projected on the background of the stage from projector positioning in the audience area. 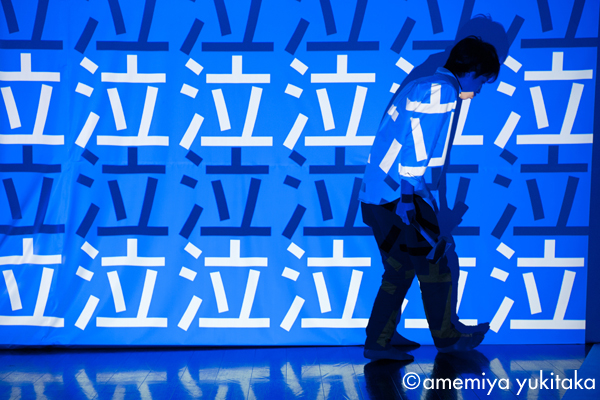 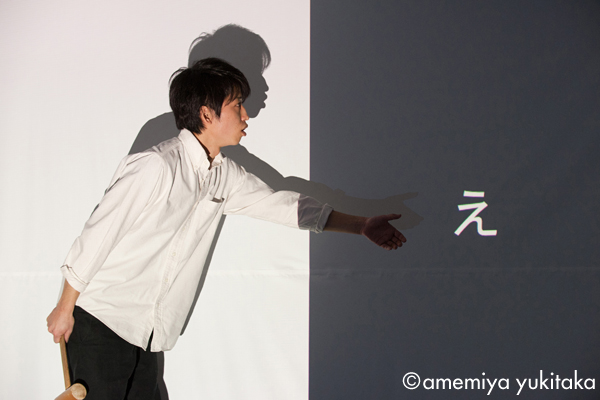 It is a rainy day. The child in the mother’s womb speaks.

Mother,
I don’t want you to be born yet,
I am not ready yet to endure this rain.

But, the child is born. Held in its mother’s arms, the baby cries. The projected word “cry” fills the down-stage screen.

A video image of a park appears on the screen. It is early afternoon on a Sunday. Appearing disheveled, as if he has just gotten out of bed, the younger brother arrives two hours late at the Shinjuku Gyoen park, where he was supposed to have a picnic with his mother, his sister and her small daughter.

With an uncomfortable sense of alienation amidst the many families with young children and couples in Shinjuku Gyoen, the “Man” is searching for an “Enemy.” By chance, he meets Sister for the first time in some years and is invited to the picnic. The two were lovers during high school.

The Man’s sense of alienation only grows in this situation. He has the fleeting thought that it would be nice if he could somehow use his accumulating alienation like the “T points” that you accumulate with your membership card for discounts at the TSUTAYA video rental shop chain.

On his way home, Man comes to a stop in front of an elementary school. Thinking him a suspicious character, one of the female teachers asks him what business he has at the school. The Man feels an affinity for her as a fellow pursuer of the “Enemy,” but she doesn’t share the feeling or understand his intent.

Returning to his small one-room apartment, the Man dreams that he is still intimate with Sister like they were in high school.

In his room is double bed bought at the discount home furnishing chain IKEA, a tall potted foliage plant and a small aquarium with rare tropical fish. In a luxury tower apartment on the 95th floor just ten minutes walk from Shinagawa Station, with a living room, dining room and kitchen and four other rooms, floor heating under the marble flooring and a Lexus in the garage, the Man is looking at the face of the sleeping Sister.

Of course it is only a dream of a “could be” life. In it, the “could be” Sister is pregnant, but the child says it doesn’t want to be born, because there would be no value in its life.

From their picnic at Shinjuku Gyoen, Sister and Daughter and Sister’s Mother return to Sister’s home by taxi. The poor Younger brother doesn’t take a taxi and runs there instead. He arrives before their taxi but the run has caused him to break a sweat. His Sister’s high-rise apartment is on the 30th floor. In the elevator Younger brother is afraid that his Sister’s daughter will say, “Uncle smells bad.”

When the Man wakes up he finds it is already past the time of his part-time job. With nothing else to do on his day’s schedule, he goes out to look for the “Enemy.”

Younger brother has a job selling Gyger counters. Sales are going well. The TV news is about the series of rape-murders of young girls, and then he gets a call from his father saying that his mother has collapsed. The Man sees people watching a news program on a TV in the shop window of an electronics store and saying that they hope the serial rapist-killer will be arrested soon and sentenced to death.

At the hospital where their mother has been hospitalized, Sister is crying as she accuses her Younger brother. Finally, Younger brother breaks down and cries as he admits that he vandalized his brother-in-law’s new car and masturbated with her daughter’s panties in his mouth. Hearing this, Sister becomes nauseous and vomits.

Younger brother calls the new car a “Porusuke,” not knowing the proper reading of Porsche.

Despite all his searching, Man has been unable to find his “Enemy.” For the Man, the Enemy he seeks is the flesh and blood embodiment of the evil at hand. To him, evil that is not embodied in flesh and blood form is mere fiction.

Before he left home, Man wrote a letter to his mother. In the letter, he wrote about things like his regrets in life as one who was born before he was ready and his prayers for the peace and assurance of new lives yet to be born.

When Younger brother turns on the television it is broadcasting live from in front of the Police Headquarters. The suspect serial rapist-killer of young girls has been arrested. Younger brother finds himself feeling a bit envious of the suspected killer.

The Man is there in front of the Police Headquarters when the serial rapist-killer of young girls is brought out, led by a group of police officers. Here at last is the “Enemy” that the Man had once met and been searching for all this time. He tries to attack the Enemy with the hammer he is carrying. But, he is stopped and restrained by the group of officers and reporters in front of the Police Headquarters.

Then the Man suddenly begins striking his own head with the hammer, and he dies.
The site is bathed in a sea of blood, and the flood of blood actually becomes a sea.

The flood of blood engulfs the site.
Behold,
how it became a sea,
and then light shone into the sea,
so bright as to blind the eyes.
No one would ever forget
the brightness of that light.

The video projected on the down-stage screen that has taken on the appearance of a children’s book then drifts away from the screen toward the ceiling, before fading out to leave the stage engulfed in darkness as the play ends.

Suguru Yamamoto was born in Yamanashi Pref. in 1987. In 2007, he started a theater company Hanchu-Yuei while a student at Japan’s Oberlin University and serves as its playwright and director. In, 2011, he participated in the “20-nen Antai” program for emerging theater groups organized by the Tokyo Metropolitan Theater with a short parody play titled “Usako no Ie” with actors dressed in fanciful animal costumes. In 2013, he presented the play Yojo X (Girl X), set in Tokyo and depicting the contemporary tensions and atmosphere and the blessings that can be found in people’s lives. Staged in a unique style with words and text are projected on a screen, this play won the attention as a form of expression symbolic of the e-mail/texting generation that communicates through text messages and images via their cell phones. In 2014, following a performance at TPAM, Yamamoto and his group were invited to perform in Malaysia and Thailand, prompting new expectations for activities abroad as well from this emerging group.