This is the inaugural work of the theater company “hi-bye” by the company’s leader, playwright, director and actor Hideto Iwai. It is based on his personal experiences of Iwai during the period of his life when he was a stay-at-home recluse. With a comical touch, it depicts the daily lives of Tomio Morita, a stay-at-home youth who longs to be a pro wrestler, his mother and younger sister Aya as Tomio struggles to get out into the world again, helped in part by members of an organization that aids young stay-at-homes in the process of becoming independent. The minimal set includes little more than a table and chairs and serves to represent the Morita family’s living room, the office of the support organization for stay-at-homes and other settings. 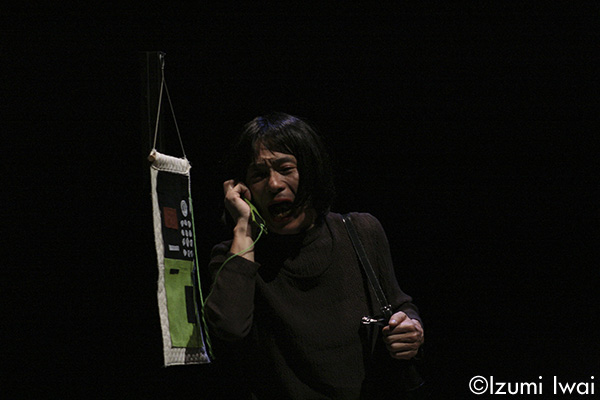 Tomio’s mother is at a public phone talking to her husband, who lives apart from the family. She learns about an “independence assistance” organization that sends social workers on home visits to help in the process of returning stay-at-homes to self-reliance and overcoming their fear of the outside world.

The scene changes to the living room of the Morita home. Tomio and his sister Aya are practicing pro wrestling moves on each other. The doorbell rings. Appearing nervous, Tomio goes to the door off-stage and we hear a verbal exchange as he receives a package from the postman.
Looking stressed by this encounter, Tomio returns to the room, only to have the doorbell ring again. This time Aya goes to the door. It is their mother returning home. Going to the door to deal with callers is being used as a task to help in Tomio’s social rehabilitation, and he is given a reward of 500 yen every time he completes the task. Aya tells their mother that Tomio successfully received a package from the postman, and hearing this their mother puts 500 yen in his reward envelope. It’s an everyday scene in the Morita home.

The mother visits the “independence assistance” organization and is met by a young man named Keiichi who explains that he himself was a stay-at-home for eight years and is now a member of the organization’s staff. The mother asks him about the process of rehabilitating a stay-at-home but Keiichi avoids answering. Insisting that he wants to meet Tomio, the mother takes Keiichi to their home.

In the Morita living room, Aya is telling Tomio that she has found a boyfriend. This makes Tomio feel lonely and he starts to pick a fight, demanding to know where the pro wrestling video he lent Aya is. Soon the conversation has shifted to a Mexican pro wrestling organization called Lucha Libre and, in a good mood once again, Tomio puts on a pro wrestling costume and struts it in front of Aya.

Suddenly the Mother comes home, bringing Keiichi with no prior announcement. Startled, Tomio throws Aya aside as he runs to the haven of his own room. Aya scolds her mother for deciding such an important thing by herself without consulting Tomio. The mother starts voicing her fears about Tomio’s future and the current state of the family, and eventually both she and Aya are in tears. While mother and daughter quarrel, we hear laughter and other sounds coming from Tomio’s room.

The next morning. Having found a mutual interest in pro wrestling, Tomio and Keiichi announce that they have formed a tag team. Tomio goes on to make the ridiculous suggestion that Keiichi for a team with Aya (start dating). Aya will have absolutely nothing to do with that proposition.

Meanwhile the Mother has gone to the assistance organization’s office again. She is met by one of the female staff members named Kaori Kuriki. The mother asks her to come and get Keiichi out of their house. Kuroki explains that Keiichi not one of their staff but a patient with a syndrome known as “stay-at-home nest jumping,” characterized by an ability to adapt to any environment immediately and make it his habitat. Kuroki goes on to say that she has a rehabilitation method that she thinks will work well with Tomio.

The scene returns to the living room of the Morita home. Tomio and Keiichi are playing pro wrestling while Aya looks on in discomfort. Enters Kuroki. When she tries to take Keiichi away, Tomio objects, saying that Keiichi has changed affiliation and is now teamed with him. Kuroki argues that if he has traded affiliation Tomio will have to pay a trade fee. Tomio is clearly perplexed by this sudden development, but Kuroki tells him that he won’t have to pay the trade fee if he will go out and do some shopping for the family.

In the Morita living room Keiichi and Aya await the return of Tomio, who has gone on the shopping errand, and Kuroki, who has gone to follow him. Aya is asking herself what she has been able to do for Tomio until now. The Mother comes home. Hearing the developments she is pleased and stands up to go to the phone to report to her husband, but she changes her mind and starts preparing dinner.

Kuroki comes in at this point carrying a bloodied Tomio on her back. Tomio regains consciousness but is in a state of intense fear. Kuroki tries to explain the effectiveness of shopping as a form of rehabilitation for stay-at-homes, but the mother is fuming and makes accusations against Kuroki. Kuroki tries to reassure Tomio that there is nothing as bad as in the outside world as what he has just experienced and that he should make an effort to go out again tomorrow. An argument begins between Aya, who says they should just let Tomio stay at home, and their Mother, who says, “What happens if he stays home and never goes out into the world again?” Keiichi takes Kuroki and leaves the house.

The next day, Aya is listening on the phone to Kuroki’s explanation of what happened the day before. After finishing the shopping, Tomio was on the crowed train and someone cautioned him that he should take the backpack off his back so it didn’t bump other passengers. As he was taking it off the contents of his shopping bag spilled on the train floor. As he was picking the things up the eyes and giggles of the other passengers became too much for him and he vomited. The vomit got on some members of a group of high school boys and, angered, they beat him up.

The Morita living room is empty for a moment. Aya comes in talking on the phone and tells Tomio that the Michinoku Pro Wrestling show has come to a nearby park. Aya runs out, leaving Tomio alone in thee room. But around him we hear the rising voices of a crowd.

The Mother as at the public telephone booth again talking to her husband, and she suddenly sees Aya run by. Then she sees Tomio following after Aya and talks on excitedly. The Mother hangs up the phone and then wanders off stage following her children to see where they are headed.

Born 1974 in Tokyo. Lived as a stay-at-home from the age of 15 until about 20. Iwai graduated from Toho Gakuen College of Drama and Music in 2001 and in 2002 he participated as a stand-in in the Takenaka Naoto no Kai production of Gekko no Tsutsushimi (written and directed by Ryo Iwamatsu), which became his introduction to vernacular style theater. In 2003 he founded the theater company hi-bye and presented as its inaugural production the play Hikky Cancun Tornado about a stay-at-home youth who longs to be a pro wrestler. Since then he has written and directed all the hi-bye productions and acted in them as well. Many of his works are gritty but laughable comedies based on Iwai’s own personal experiences. His thoroughly objective treating of the theme of human relationship of protagonists overly self-conscious and concerned about the distances between the self and the other invariably create humor and poignancy. In recent years Iwai has worked increasingly outside his own company as a director actor and scenario writer. Representative works include Onegai Hokago (2007), Te (The Hand) (2008) and Nagerareyasui Ishi (2011) among others. Hikky Cancun Tornado is also scheduled to be performed at the South Korean performing arts market PAMS in Oct. 2011.