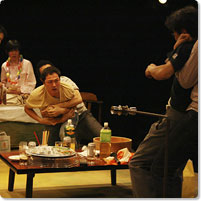 This is a semi-autobiographical play in which the author, who has been through a period of self-withdrawal from the world, tells a story about a renewal of relationships within his family occasioned by the death of his senile grandmother. With a theme of “Family that isn’t especially family but, in the end, unavoidably family,” it depicts the rebirth of a traumatized family that was distorted in an almost amusing way by the father’s domestic violence. 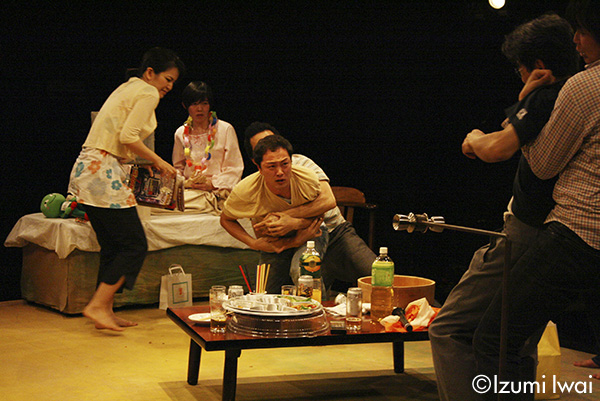 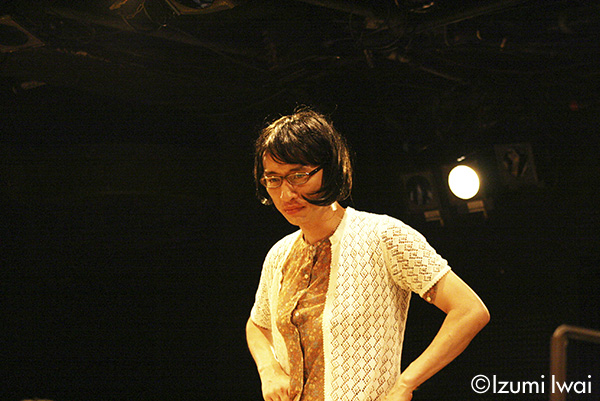 The prologue and epilogue are both set at the funeral of the family’s maternal grandmother, Kikue Inoue, at a church. The main part of the play is composed of recollections depicting the events of the day the grandmother died from the differing viewpoints of two different people.

The scene is Kikue’s funeral. In attendance are Kikue’s daughter, Michiko, and her family, the Yamada’s. The family is composed of mother, Michiko, the father, whose name remains unspoken, her oldest son, Taro, the oldest daughter, Yoshiko, the second son, Jiro, the second daughter, Kanako and Yoshiko’s husband, Kazuo and a friend of Jiro’s named Maeda.
The minister, accompanied by two undertakers, is approaching the coffin with a seemingly meaningful presence, saying, “Everyone, is the Lord there? Where is the Lord?”

Recollections from the perspective of Jiro:

For the first time in quite a while the entire Yamada family has gotten together at the home of their grandmother Kikue, next door to their family home. Jiro has invited his friend, Maeda.
Kikue suffers from dementia and in one hand she grips a wooden model of a hand, of the type used as a model for drawing students (and for the remainder of the play the wooden hand play the role of Kikue’s hand). Kikue lives with the Yamada’s eldest son, Taro. Taro’s collection of car parts is spread out in the front room of the house. Jiro doesn’t like Taro’s blatant insensitivity regarding Kikue in the use of her while she is still alive.
Conversation between Jiro, Maeda and Yoshiko reveals their father’s past history of domestic violence. Taro was the one who suffered most from that violence and one of the things that had led to him being beaten by his father was his car part collection.
The family gathers for Karaoke singing in Kikue’s room. Yoshiko, who suffered the next most abuse by the father after Taro, is attached to the idea that everyone join in, because this is the first family reunion in some time. It is a pleasant scene, as the family seems to be enjoying the Karaoke. But due to her pride as the singer in a band, Kanako is refusing to sing and eventually flies out of the room when the pressure becomes too uncomfortable for her.
Seemingly oblivious to the thoughts of his children, the father is enjoying his turn with the microphone. Jiro has soon had enough of his father’s insensitive, self-centered, irresponsible and at times threatening behavior. He loses his temper and a fight begins.
To Jiro’s “I’m going to haunt you to the grave,” the father answers curtly, “I’m glad.” And to Taro’s comment that “It’s a waste of words trying to get him to listen,” Jiro and Yoshiko respond that it to ignore it either.
Amidst the arguing, Kikue suddenly dies.
The next morning the undertaker comes and they move the body out. Later, as Michiko sits in relief at last, Kikue comes floating up behind her back….

Recollections from the perspective of the mother, Michiko (played by the playwright, Hideto Iwai):

In her dementia, Kikue doesn’t even recognize her daughter Michiko’s face anymore. Taro was always closest to his grandmother and now he joins his mother in taking care of her with fondness and understanding. He can’t help feeling annoyed at how insensitively Jiro treats his grandmother on his infrequent visits.
Yoshiko and her husband Kazuo arrive with gifts from their recent trip to Hokkaido. They tell Michiko that they will be moving near the Yamada home because things have not been going well between Yoshiko and her mother in law.
Once the Karaoke singing begins, it is the same scene of family togetherness that Jiro had seen in the first half of the play. In this second half, however, Michiko peeks into the room and sees the family smiling as they sing and even forming a team gymnastics type pyramid. Although it is a surreal picture of the whole family trying to become one again, Michiko can’t keep herself from breaking out in tears as she joins in the singing.
Then Kanako comes running out of the room crying, supposedly as a result of being forced to sing against her will. However, according to Kanako the reason she had not sung was not a matter of her pride as a singer but, rather, what she perceived to be a strangely menacing atmosphere everyone was creating.
After the fight between the father and Jiro, Michiko is asked by Yoshiko why she never divorced their father, to which she replies that she was always afraid of his wordless, oppressive presence.
Later when she is alone with her husband, Michiko asks him, “Shall we go our separate ways?” He replies, “Shall we?” Then Michiko goes on to ask, “Would it satisfy you if we separated.”
In the midst of this angry exchange, Michiko realizes that Kikue has died. As if the floodgates had opened, Michiko unleashes all her pent up anger and grief on her husband.
The next morning Taro and Yoshiko are arguing about the insensitivity of the previous night’s Karaoke. Taro suggests accusingly that they had inappropriately used Kikue as a means to help mend the family bonds. The undertaker arrives, and when the four Yamada children begin to lift the coffin, Taro breaks out crying.

“Drop dead!” “Watch what you’re doing!” “Why does everything have to go wrong?”
In the process their angry shouts meld into a rancorous hymn, and as if awoken from the dead by the clamor, Kikue rises from the coffin and joins in the singing.

Born in Tokyo in 1974, Iwai became what is now called hikikomori (voluntary shut-in, person who withdraws from the world) from around the ages of 15 to 20. In 2001 he graduated from the Drama Dept. of Toho Gakuen University. Through his involvement in Takenaka Naoto no Kai’s Gekko no Tsutsushimi as an extra in 2002, Iwai became familiar with Japan’s “colloquial language theater” and in 2003 he wrote the play Hikki Cancun Tornado about a reclusive who wants to become a pro wrestler and started the theater troupe Hi-bye. Since then he has written and directed all the Hi-bye productions, while also performing as an actor. His representative works are Hikki Cancun Tornado , Onegai Hokago and Te .