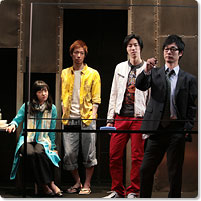 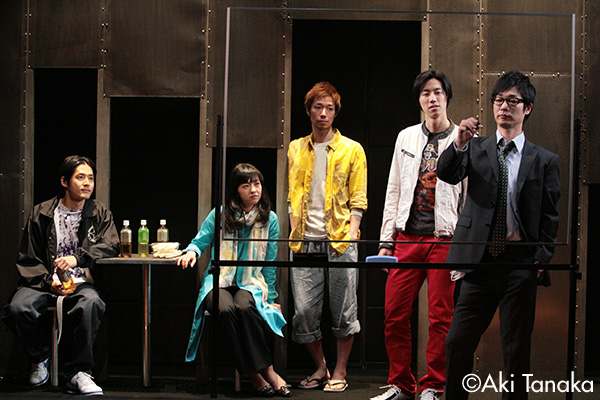 The setting is a regional city in Japan with a population of just over 100,000.

An inexplicable traffic accident has occurred. A car turned a corner without slowing and came to a crashing stop 5 cm in front of a pedestrian as if it had hit an invisible wall. The pedestrian was uninjured but the lover of the driver was seriously injured in the passenger seat.

An insurance inspector named Yokomichi has been assigned to investigate the accident, for which there is no logical explanation. He gathers the witnesses to question them again and again about what they saw. The five witnesses include the driver, Naoki Nitta, whose lover is now in the hospital in serious condition, the pedestrian Naoi Tamiya, who was almost hit by Nitta’s car, and the novelist Morio Samon who was walking with him, and bystanders Kaoru Makabe and Keito Akiyama, who witnessed the entire accident from up on a pedestrian overpass. Again today, Yokomichi has gathered them in the same room to question them about the accident.

Nothing is clarified about the accident before Morio and Naoi leave, but after they are gone Kaoru and Keito begin to talk about an all-powerful but limited-period type of god called Domino. The world revolves around the Domino god and when a Domino wishes for something, the force of that will can change the course of fate, they say. However, the Domino is never aware of the fact that they have such godly power, and because the power passes from one person to another with no visible transformation, no one is aware of the presence or existence of the Domino. Kaoru and Keito explain that the inexplicable accident is a miracle resulting from the fervent wish at that moment by the current Domino, Morio, that his friend Naoi not be injured. Kaoru explains that in this way, the world moves unfairly according to the wishes of the Domino, and those who come near a Domino are drawn into a cycle of events that inevitably lead to unhappiness. Keito, who also believes all Kaoru is saying, confides that they are going to conduct an experiment to prove that Morio is in fact a Domino.

To execute this experiment they have gotten an HIV carrier named Toro to become friends with Morio. If Morio is indeed a Domino, his desire for his new friend to be healed will surely lead to another miracle. Meanwhile, Naoi, who is in love with a subordinate named Izumi Hiraoka, has asked her to come with him to Tokyo, where he been promised a job as an editor. However, she turns down Naoi’s offer. As an aspiring author herself, it appears that Izumi is drawn to Morio instead. Now Naoi is disturbed by the way everything seems to work out to Morio’s advantage.

When the fact is revealed that Kaoru is presently receiving psychosomatic treatment for delusions about a “Domino fantasy,” Yokomichi and the others begin to question the existence of this Domino phenomenon. Then, another miracle occurs. After Toro manages to get Morio to say the words, “I hope you will be cured,” he goes for his HIV test and the virus appears to have miraculously disappeared. Now Naoki presses Morio to cure his lover, who still lies gravely injured in the hospital. However, with no consciousness the power he apparently possesses or knowledge of the Domino concept, Morio becomes increasingly confused by the events surrounding him. But, then the true identity of the Domino is revealed ….

Born in 1974 in Kashiwazaki, Niigata Prefecture. Tomohiro Maekawa founded the theater company Ikiume in 2003 and has since written and directed all the company’s plays. The name Ikiume implies getting glimpses of the other world [the afterlife] while still alive, which is Maekawa’s theatrical concept. He has drawn attention in the theater world with works that combine elements of science fiction, horror and the occult in ways that bring a sense of wonder into everyday life situations. His works include Sampo suru shinryakusha (Strolling Invader), Kansu domino (Mathematical Domino), Nukeana no kaigishitsu (Meeting Room with an Escape Hole) and Omote to ura to, sono mukou (Outside In, and Out There). In December 2007 he also published a short novel version of Sampo suru shinryakusha , which has prompted new anticipation for his work as a novelist. Maekawa is the winner of the award for best play in the 16th Yomiuri Drama Awards for Omote to ura to, sono mukou and the best director award for this play and Toshokanteki jinsei Vol. 2 – Tate to hook (A Library-like Life Vol. 2 Shield and Lance).