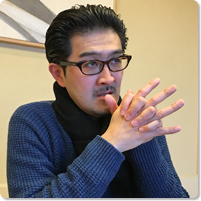 Akira Takayama, expanding the “architecture of theater” as a new platform in society

Active initially in theater in Germany, Akira Takayama (b. 1969) returned to Japan and formed the unit Port B in 2002. From 2006, he has been undertaking projects in the urban environment based on theatrical concepts deriving from physically active research. In 2010, Takayama was noted for introducing “The Complete Manual of Evacuation,” a theatrical project that set up “evacuation points” at locations around a city where “evacuees” (project participants) could discovered various communities, from religious facilities to collective and shared housing, homeless people, and even so-called “encounter cafés” as places to evacuate from the city they know and construct new relationships. Since then, while bringing together collaborating artists from various genres, Takayama has implemented various projects that show the urban environment from different human perspectives, such as his Referendum project, Tokyo Heterotopia project and Yokohama Commune project, in cities both in Japan and abroad. Calling Peter Brook the reference point his theater vision grew from, Takayama talks in this interview about his ideas and activities up until his most recent project on the theme of refugees, “European Thinkbelt,” presently in progress with Germany’s Mousonturm.
Interviewer: Masashi Nomura [producer / dramaturg]

(*1): Tsugio Sekiguchi
Scholar of the German language. Born 1894, died 1958. As a scholar Sekiguchi made a great contribution to German studies in Japan, and in addition to teaching at universities and foreign language schools, he was in charge of the German language study program of NHK Radio. A linguistic genius, he studied and became accomplished not only German but English, French, Latin and Greek. From the 1910s, he also became involved in the New Theater Movement as a theater-maker involved in translation, acting and directing.

(*2): Hans-Thies Lehmann
German theater scholar. Born 1944. From 1981 – 1987 he studied at the University of Giessen and taught at Frankfurt’s Goethe University from 1988 – 2010. In 1999 he published the book Postdramatisches Theater , a theoretical study of the new trends in theater after the 1960s which has had a major influence on performing arts worldwide.

(*3): René Pollesch
German playwright and director. Born 1962. Studied Applied Theatre Studies at the University of Giessen and from the 1990s become a leader of the post-drama movement, presenting productions at theaters around the German-speaking countries. He won the Mülheimer Dramatikerpreis in 2001. From 2001 – 2007 he served as artistic director of the Prater small space at the Berliner Volksbühne. In 2002 Pollesch was voted the best German dramatist in a critics’ survey by “Theater heute” magazine for his “Prater Trilogy.” He has presented Cinecittà Aperta-Ruhr Trilogy, Part 2 at Festival/Tokyo in Japan (2011) and tpt “Tell Everyone! That Soylent Green is Human Flesh” using Japanese actors (2006).

(*4): Rimini Protokoll
A three-person performance unit formed by Stefan Kaegi, Helgard Haug and Daniel Wetzel in Frankfurt in 2000. They have won international acclaim for their “documentary theater” that brings to the stage non-theater people who have knowledge, experience or professional affiliation in a particular chosen subject in order to present questions connected to real-world issues, and conducting projects in public spaces using a variety of media. In Japan, they performed Mnemopark (2008), Karl Marx – Das Kapital, Band 1 (2009), Cargo Tokyo-Yokohama (2009) and 100% Tokyo (2013).

(*5): “One Way Street” (2006)
Taking the Sugamo Jizodori shopping street as its setting, this was Port B’s first “tour performance” work. As they walk the street, each participant (audience) listened to an audio tape of sounds from the street recorded 500 times. While proceeding along the street following instructions given at several points, they experience the visual and mental sensations of seeing while being seen.

(*6): “Tokyo / Olympics” (2007)
With the cooperation of the regularly running “Hato Bus” bus tour company, the tour performance visited sites around the city related to the 1964 Tokyo Olympics to explore metropolitan Tokyo as a city where a variety of “competitions” are held and our lives there as the “we” (receptive audience).

(*7): “Sunshine 62” (2008)
In the process of rounding a number of checkpoints with views of Sunshine 60, the commercial skyscraper built on the land where the old Sugamo Prison had stood that now stands as a landmark of the Ikebukuro district of Tokyo, this tour performance work traces the history of postwar Tokyo and its memories. The participants tour in teams of five in accordance with their given roles and the instructions in the tour’s instruction booklet to perform a number of tasks and engage in discussions about given themes.

(*8): “Complete Manual of Evacuation (Tokyo Version)”
Based of the theme of “evacuating from Tokyo time,” this project sought to fabricate new relationships between individuals and the city of Tokyo. “Evacuation sites” were set up at laces near the 29 stations of the Yamanote train line that circles the city center. Participants (the audience) first accessed the Complete Manual of Evacuation website and visited the “evacuations sites” set up in religious facilities, shared housing facilities, facilities for the homeless, etc., near the station designated on the website to visit. There they met and spent time with people from various Tokyo communities.

(*9): “Compartment City Tokyo”
This was a project that premiered at Festival/Tokyo 2009 Autumn. In Ikebukuro’s West Exit Park a temporary 24-hour private-cubicle video arcade was set up. Based on a television documentary model conceived by Shuji Terayama in the 1960s, passers-by in the park, foreigners and homeless were interviewed, with each person being asked the same questions and DVDs were made of the interview videos and lined up on shelves in the arcade for visitors (audience) to view. In addition, an “Evacuation drill” was performed in which participants (audience) went from the video arcade to a “encounter café” set up in a multiple-tenant building. There, the participants had a 10-minute talk with the person of their choice during which they asked the same questions as on the interview videos.
In 2010, a “Compartment City Kyoto” (KYOTO EXPERIMENT), and in 2011 a “Compartment City Vienna” were created.

(*10): “Complete Manual of Evacuation (Frankfurt Version)”
This project was performed by Port B for the season opening at the Mousonturm theater in September of 2014. In collaboration with 15 artist groups, 40 “evacuation sites” were set up around the city and neighboring towns, and after downloading the map from the project’s website, participants used the trains and other public transportation to visit the sites. The project was nominated for the “2014 Most Important Works in the German-language Countries” of the theater critical website Nachtkritik, public voting rendered it 8th place.

(*11): “Referendum Project”
After the Great East Japan Earthquake and Tsunami and Fukushima 1st Nuclear Reactor Accident, this project sought to answer questions about “The voice of ‘we’ (the audience).” An archive of tapes of interviews of middle school students from the Tokyo and Fukushima areas was set up in a modified refrigerator truck for visitors (audience) to view, while also filling out questionnaires with the same questions as the interviews. At the project’s premiere at Festival/Tokyo 2011, the truck toured Tokyo, Yokohama and Fukushima and talk events were held with various academics, artists and poets. In 2012, the project went to the Tohoku region of disaster-struck East Japan, and in 2014 to Hiroshima, Nagasaki and Saitama, where more interviews were made with middle school students to add to the archive, and video installations based on the project were also set up in Mito, Japan, Vienna and Berlin.

(*12): “Tokyo Heterotopia”
Focused on the theme of alien or foreign communities in Tokyo, this was a project in which participants visited places like religious facilities, monuments and remains of a refugee detainment center and ethnic restaurants to learn about the history and present of Tokyo and Asia. At each of the sites, participants could listen to radio broadcasts of stories written by poets and novelist inspired by the respective sites. After being performed at Festival Tokyo 2013, a Tokyo Heterotopia iPhone app was released in 2015 and new sites will be added by 2020. Based on Tokyo Heterotopia, a “Taipei Heterotopia” was completed in 2016 based on research in Taipei, and a project is also in progress in Athens (opening in May, 2017).

(*13): “Yokohama Commune”
Based on research concerning the Asian communities in Yokohama, videos were produced on the subjects of the Japanese spoken by the city’s Indochina refugees and Japan. A live installation was implemented in which residents of the Kotobukicho district of Yokohama where there are numerous public lodging houses for day laborers and refugees from Indochina conduct improvisational Japanese classes with the former acting as teachers and the latter as students and using as the “textbook” a Japanese translation of Ray Bradbury’s Fahrenheit 451 , in a work that re-examines Japan and the Japanese language. It was on the program of the Yokohama Triennale in 2014.

(*14): Akita Kokugo Denshujo (Akita Japanese Language Training School)
Focusing on the past and present of Japanese language education that exists in a jumble of standard Japanese and regional dialects, this project was conducted through a tie-up with schools and the cooperation of television and radio stations. “Japanese Language Training School” were schools established in Taiwan when it was a Japanese colony at the end of the 19th century.

(*15): “Oita Media Collegio”
Japan’s first “Collegio” (Christian Seminary) was established in today’s Oita Prefecture back in the 16th century and served as a place where various aspects of Western culture and academic sciences were taught. Focusing on this aspect of Oita’s history, this project was conducted with the cooperation of the Oita Godo Newspaper and other media, including TV, radio and websites.

(*17): Keigo Kobayashi
Architect. Associate professor of Waseda University. After graduating from Waseda University and Harvard University graduate school, he worked at the OMA/AMO office lead by Rem Koolhaas in Rotterdam from 2005 to 2012 and participated in many of its major projects. He has worked on large-scale architectural projects in the Middle East and North Africa and various urban planning projects. In 2014, he was in charge of display design for the Japan pavilion of the Venice Biennale (Architecture).