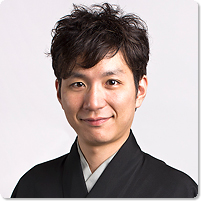 From new Kyogen to stand-up comedy and opera, the creative power of Doji Shigeyama

Doji Shigeyama (born: 1983) is recognized today as one of the new emerging talents in the world of Okura School Kyogen. Influenced by his pioneering grandfather Sennojo (died: 2010), who broke the taboo of the world of Noh-Kyogen by engaging in a rich variety of activities outside his Kyogen profession, and by his father Akira, who followed that vision by attempting to achieve fusions of traditional Japanese performance arts and Western contemporary theater with his NOHO Gekidan theater company and other international activities such as directing opera and staging Kyogen performances in English, Doji Shigeyama is opening up new horizons as a performer. His activities as an artist have ranged from writing and directing stand-up comedy conte for his Hyakumanben performances , writing a new Kyogen work for his Marikouji performances with the aim of creating new classics that will still be performed a hundred years from now and directing an opera and bilingual Kyogen. In this interview we ask him about the thoughts behind these broad-reaching activities.
Interviewer: Kazumi Narabe [Journalist]

Doji Shigeyama
Kyogen artist of the Okura School. Born in Kyoto in 1983. Studied Kyogen as an apprentice of his grandfather, Shigeyama Sennojo II . First performed on stage in 1986 in the play “The Sorcerer’s Apprentice” staged by his father Akira Shigeyama’s NOHO Gekidan company. He studied at the Kyoto International School (Jr. high school, high school). In 2006, Doji performed the difficult Kyogen stage, Tsurigikitsune as a demonstration of his acquired skills as an apprentice. In 2013, he wrote and directed his first “Hyakumanben” conte piece, and in 2014 he began his “Shinsaku ‘Jun’ Kyogen Marikouji” performance group to present new Kyogen plays he writes. In other wide-ranging activities he has used his English speaking skills in appearing regularly on the NHK language program “Purekiso English” and also performs as an actor in movies and works as a stage director, while also directing opera and is active with his chori poet group “ chori Doji.”

Iroha
This is a Kyogen play often performed by young Kyogen family boys. In it, the father tries to teach his son the hiragana Japanese phonetic alphabet using the traditional I-ro-ha sequence of the 48 characters but the child scoffs at him and refuses to try to learn to read the characters. The father then demands that the son learn by repeating after him as he reads the characters. But the child then proceeds to copy even the voice of his irritated father until the father gets mad and pulls his son to the ground. The son then stands up and does the same to his father. This skit is also said to be a parody of the lessons where a master has his apprentice learn his lines by copying the master’s vocalization and movements precisely. The interest lies in the sight of the clever child using his irrelevant responses to make fun of the adult and the sight of adult gradually becoming irritated.

HANAGATA
One of the Shigeyama family performance series started in 1976 as a study series for the younger members of the family named “Hanagata Kyogen Kai.” At the time, the members were Sengoro (Masayoshi at the time), Shime (Shingo at the time) and Akira, and now it has become the group of their sons as “HANAGATA” consisting of Masakuni, Motohiko, Shigeru, Ippei and Doji, who use it to perform experimental works. 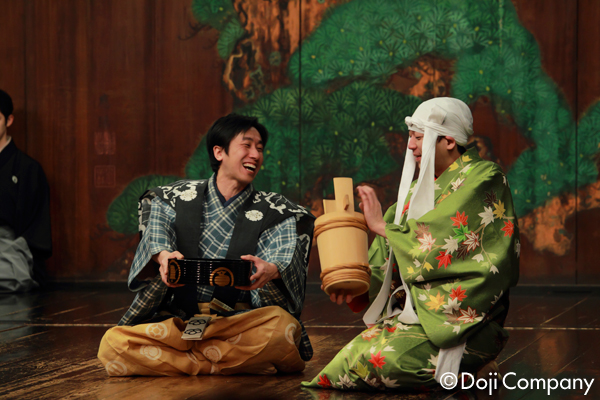 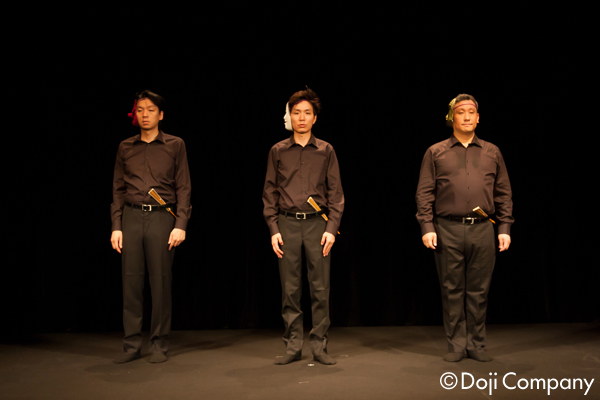 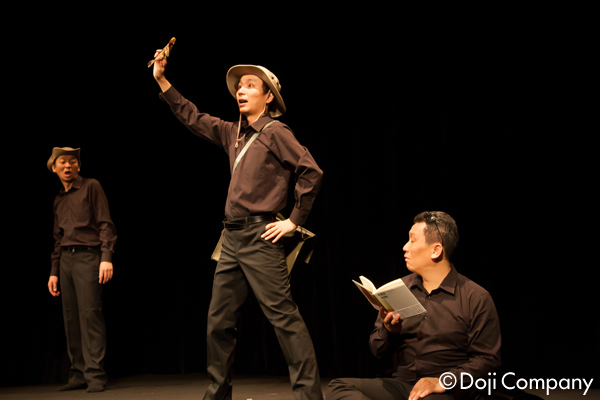 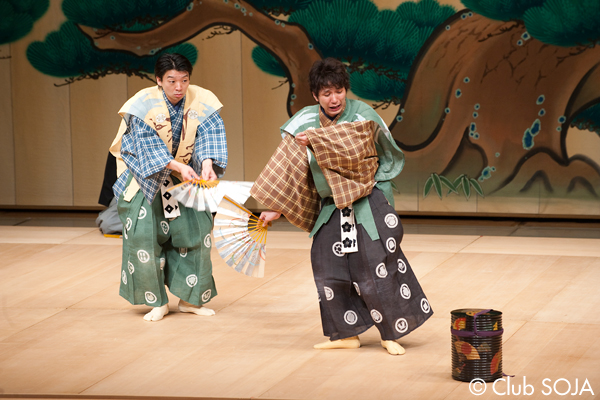