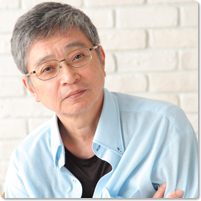 Theater as the Play of Life The World of Soh Kitamura

The recipient of the 17th Tsuruya Namboku Memorial Award (2013) for drama, judged by a panel of theater journalists from among the year’s most outstanding new plays, is Soh Kitamura (61) for his play “Goodbye,” a work based on an unfinished novel by Osamu Tazai and the first of series of plays he is writing as homage to Japanese literature.

As the playwright and director of the company T.P.O. Shi-dan from 1970, with the name changed later to Suisei ’86 and Project Navi, Kitamura was one of the leaders of the small theater boom of the 1980s (ending company activities in 2003). With representative works are the epoch-making “Hogiuta” (Ode to Joy), a play symbolizing the aesthetics of the 1980s that continued to be performed for 15 years after its 1979 premiere. It depicts with a bright but sad touch a troupe of three traveling performers named Gesaku, Kikyo and Yasuo who play the barren towns of a nihilistic post-nuclear-Holocaust world. Working from bases in Nagoya and Osaka, Kitamura has also had a big influence of young playwrights in the Kansai Region of Japan by teaching at venues such as the Itami So-ryu Shijuku course/seminar for held at AI HALL in Itami, Hyogo Prefecture that he has led for nearly 20 years. As a highly reputed author, he has written not only plays but also novels, radio dramas and essays. In this interview we talk with him about his new series of plays based on famous figures of Japanese literature and what he has gained as a writer from these experiences.
Interviewer: Hirofumi Okano, Jun Kobori

Congratulations on winning the Tsuruya Namboku Memorial Award. Your award-winning work is an adaptation from the unfinished novel Goodbye that the famous author Osamu Dazai (1909-1948) was writing when he took his own life. The story is about a man who devises a scheme to break off the relationships with his ten mistresses that involves hiring a woman of exceptional beauty and taking her with him to visit each of the mistresses and inform then the he is engaged to marry her. That is the kind of man it is about. But, you turn it into a love romance about the selfless love of an aging man who has lost his beloved wife. What made you decide to write a series of plays based on the works of famous figures in Japanese literature? And, what made you decide to choose this particular work?
Originally, I didn’t have any interest in true Japanese literature at all. From childhood I liked entertainment type fiction like the ninja arts and magic stories of Futaro Yamada. Regarding true literature, about the only authors I read were Ryunosuke Akutagawa, Ango Sakaguchi and Osamu Dazai, and I had never even read all the works of Soseki Natsume. So, I thought maybe I would take this opportunity to read some (laughs). Since Goodbye is an unfinished novel, it was like I thought I would give it a good finish! I knew I couldn’t compete with Dazai doing it as a novel, but maybe I could show that I’m better at play writing! (Laughs)
The situation of trying to break off ties with a number of mistresses is the same, but from there you make the play quite different. You make it into a love romance in which, in order to replace the love he had for his deceased wife, the aging man is supporting a number of women in need without asking anything in return, and is preparing to take the first step toward a new love.
You could call it a case of developing the areas that relate to your own life and emotional state. For example, when you take a middle-aged man and place him in the context of one entering old age, you have the events of his past, but you also have a time of life when various things are naturally beginning to change.
Just after you wrote Hogiuta (Ode to Joy) , you also wrote a play that referred to Dazai’s Goodbye . In that work the setting was the Tamagawa Josui waterway [where Dazai committed suicide] and the characters included the author and his editor and a couple of strange beggar-like characters named Gesaku and Kyoko.
The play this time is completely different. That time just after Hogiuta was a time when I was thinking of quitting my work in theater, and by writing a work called Goodbye , I was thinking it might be a good way to say goodbye to it all (laughs).
So, Dazai was one of the authors in true literature that you liked, wasn’t he?
Yes. Dazai, and I like Ango [Sakaguchi]. Among Ango’s early works, I think Kogarashi no Sakagura kara and Kaze Hakase (Doctor of Wind) are good. I particularly like his essays, and the word farce that he discusses in his essay “About Farce” (*1) is theater-oriented and one that I liked very much. He wrote that farce has the power to negate everything, be it the Yes and No dichotomy, this ideal or that, everything. As for Dazai, he was skilled at everything, be it short stories, novels or whatever. Also, his skill at writing dialogues between characters is amazing; he is able to give the reader the feeling that you are the only one being allowed to read the conversation.
Dazai, with the distinct rhythm of his prose and Ango [Sakaguchi], with his somehow broken down prose style, are both writers who are liked by some but disliked by others. It seems to us that there are few people who like them both.
It seems that in my case, I like Dazai’s prose, but when I write, it comes out as Ango style prose. None of it is intentional, but people tell me that when they read my prose carefully it has a clear Ango style.
Since I became a writer, I have always thought from my younger years that there are two things that I must transcend as a writer, two things that I must find a position relative to and with objectivity toward. Those two were Dazai and the author of Hatachi no Etude (*2) , Tozo Haraguchi. With regard to Dazai, I felt that I had found some relativity after reading works by Takaaki Yoshimoto. As for Hatachi no Etude , it has continued to defeat me. It made me feel that I can’t give up writing until I can match it.
We are told that the subject of the second work of your Japanese Literature Theater series is the author Soseki [Natsume].
When Kyōko Azumi, formerly of the Culture Dept. of the Nagoya office of the Yomiuri newspaper whom I have frequently been fortunate to work with, won the Watsuji Tetsuro Literary Award for her book “Kusamakura” no Nami to Shingai Kakumei , I decided to do Kusamakura (*3) myself (laughs). That was the first time I read it.
What was your impression of it?
When I read Kusamakura , I was very impressed by the accelerating speed of the story. I wasn’t expecting that. The accelerating effect is created by the story’s heroine, Nami; her role makes the story accelerate faster and faster. I enjoyed that sensation, and you could say that it surprised me a bit. My play based on the story is already finished, but the contents are still secret. In fact, my third play of the Japanese Literature Theater series is also finished, but I can’t reveal what it is about yet, either. (Laughs)

What he wants to convey to young playwrights

Soh Kitamura
Born in Shiga Prefecture, Japan in 1952, Soh Kitamura is a playwright, novelist and essayist. He began activities as a playwright and director for his own company “TPO Shi-dan” (established 1979) and then with companies with different names, including “Suisei ‘86” (established 1982) and “Project Navi” (established 1986). He won attention as a standard bearer of the small-theater scene with his representative play Hogiuta (Ode to Joy) that premiered in 1979 and continued to be performed for some 15 years (he ended his theater company activities in 2003). In 1984, Kitamura won 28th Kishida Drama Award for his play 11 nin no Shonen (Eleven Boys). For the play Yuki wo Watatte Dai ni ko Tsuki no Akarusa (Across the Snow: The Second Draft ＆ Moonlight) he won the Kinokuniya Theater Awards for Personal Achievement. From 2013, under the production of the SIS company, Kitamura began writing a new series of plays as an homage to Japanese literature. The first work of this series title Goodbye and based on the Osamu Dazai’s unfinished novel by the same name won 17th Tsuruya Nanboku Memorial Award for drama. To date, Kitamura has written approximately 200 plays. He is also active as a novelist, radio drama author and essayist, etc. In 2013, he published a book title Rennai-teki Engeki-ron (Love-like Theater Theory) (Matsumoto Kobo publishers).

*1 About Farce
is an essay published in 1932. It is a treatise on farce that treats it on the same lavel as tragedy and comedy, despite the general tendency to see it as a lower form of theater or performance. In the course of the essay, he defines tragedy as a generally more serious type of literature, then defines comedy as a form of comic theater or novel succeeds in touching people’s hearts by showing meaningful reverse sides of normal appearances, reinforced by morals and/or tears; then he defines farces as a form of literature employing revelry and mayhem from beginning to end.

*2 Hatachi no Etude
: A book of memoirs written in the form of a college note book by Tozo Haraguchi before he committed suicide at the age of 19 while a third year student at the First Higher School of Japan (Daiichi Kotogakko) in 1946. It had a strong influence on the post-war generation of writers and young people and continues to be read today.

*3 Kusamakura
(lit. The Grass Pillow, but translated as The Three-Cornered World in English) is a novel by Soseki Natsume published in 1906. The book’s opening lines ( Approach everything rationally, and you become harsh. Pole along in the stream of emotions, and you will be swept away by the current. – Alan Turney trans.) are well known. Set in the era of Japan’s Westernization, the story develops around the chance meeting of a Western-style oil painter who is staying at an inn in a hot springs spa and the inn’s beautiful young matron, who is recently divorced.

*5
Tsutomu Miura (1911-1989): Linguist, Marxist. His book Nihongo ha do iu Gengo ka (What kind of language is Japanese?) published in 1956 is Miura’s leading treatise on linguistics that analyzes the Japanese language from the standpoint of objective expressions and subjective expressions. 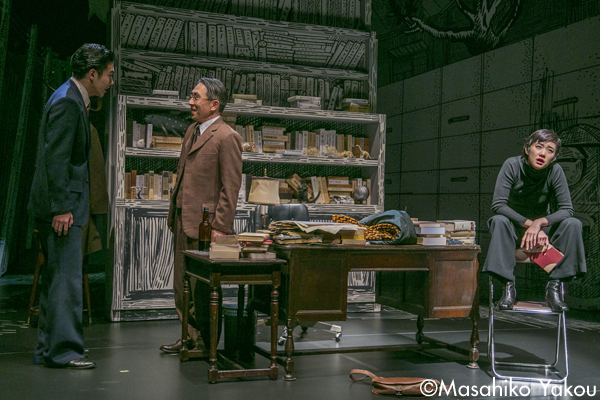 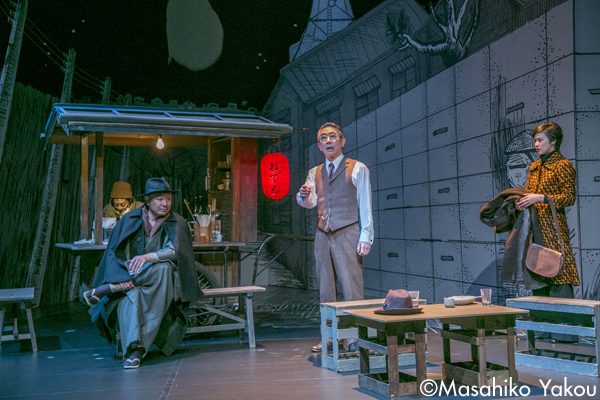 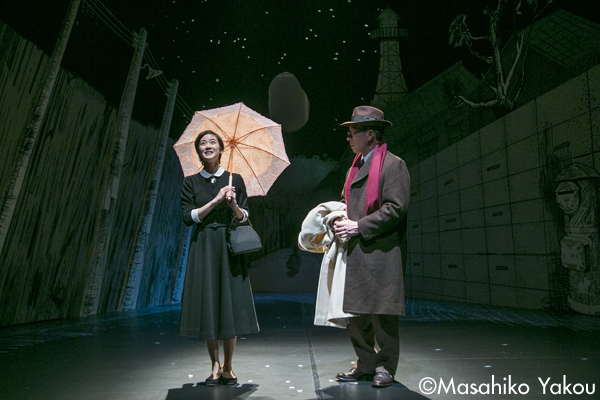 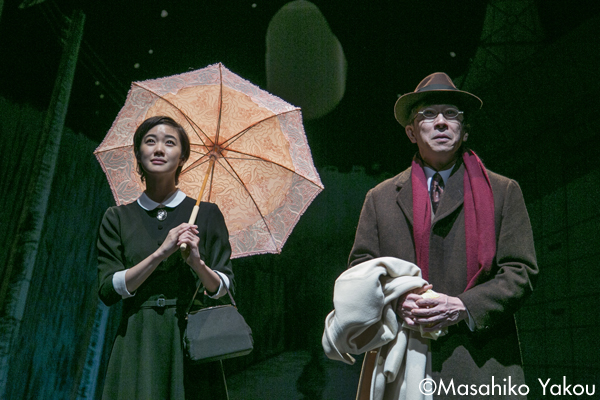