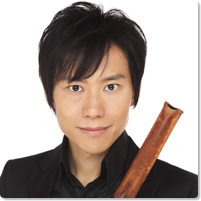 Dozan Fujiwara, exploring the potential of the Shakuhachi, in the pioneering spirit of a great master

The shakuhachi is a traditional Japanese five-holed bamboo flute played by blowing against the sharpened but reed-less mouth. On February 10th of this year, the master shakuhachi flute player Hozan Yamamoto, who pioneered new possibilities for the shakuhachi during the first contemporary boom in traditional Japanese music ( Hogaku ) popularity in the 1960s and later rose to the rank of Living National Treasure, passed away at the age of 76. He collaborated with jazz musicians from Japan and abroad, including Gary Peacock and Yosuke Yamashita and created new music fusing Hogaku and Western music, like the epoch-making work Ginkai done with the Kikuchi Trio. As a student of Hozan from his middle school years, Dozan Fujiwara (born 1972) acquired exceptional technique and became the leading new face among shakuhachi performers in the world of traditional Japanese Hogaku music from the 1990s while carrying on the spirit and legacy of that great master. Since his days as a student at the Tokyo University of the Arts, Dozan has been involved in a variety of collaborations, and since his debut as a performer in 2001, he has not only been active as a live performer of the traditional repertoire but also performing in units including KOBUDO with cellist Nobuo Furukawa and pianist Takeshi Senoo and a marimba unit with SINSKE, and with orchestras in Japan and abroad and worked with contemporary music composers in experimental performances, actively spreading the appeal of the shakuhachi to a growing audience. In this interview on January 23, just a month before the news of his teacher’s passing, Dozan took the time to speak with us about his artistic activities and the appeal of the shakuhachi flute.
Interviewer: Junko Hanamitsu

First encounters with the shakuhachi

Could we begin by asking you to tell us about how you first became involved with the shakuhachi flute?
I began learning to play the shakuhachi when I was in the 5th grade of elementary school. I had come to like playing the recorder [an instrument played in the Japanese elementary school curriculum] and had continued playing it. My grandmother at our family home was a flute teacher and she suggested that I try playing the shakuhachi. That led to my first encounter with the instrument. Since there is no such thing as a child-size shakuhachi, I was barely able to [reach and] cover the holes with my fingers and at first I was unable to get any semblance of a true sound out of it. Until then I had never encountered an instrument that I couldn’t get a sound out of, so it was a big challenge and a shock for me. Since I was also a smaller boy in physique, I couldn’t begin to match the volume of breath that the adult around me had. So, I began searching for was on my own to get a decent sound out of the instrument. I believe now that if the shakuhachi had been an instrument that I had been able to get a sound out of from the beginning, I would never have gotten into it as much as I did. It may be that that initial period of trial and error to find ways to play it is the reason I am able to play the shakuhachi in such a variety of ways today.
How did you come to study under the great master shakuhachi player Hozan Yamamoto?
My first teacher passed away at an old age, and for a while after that I studied under a younger teacher until I reached a certain level. Then I was introduced to Hozan Yamamoto during my second year in middle school (8th grade). By that time I was able to play a number of pieces to some degree, so rather than being “taught” to play by master Hozan, it was more like a process of listening to his sound and then trying to “steal” what I heard and make it my own.
Hozan-san was one who pioneered new possibilities for the shakuhachi during the first contemporary boom in traditional Japanese music ( Hogaku ) popularity in the 1960s with new experiments like playing in collaborations with jazz musicians. What kinds of influence do you feel he had on you as a shakuhachi player?
He had a very big influence on me. I believe that I am able to be active as a performer in the ways I am today because of the areas master Hozan pioneered. I feel that I have always watched him [from behind] and tried to follow his example.
Do you feel that there are any particular musical experience thus far, including those involving Hozan Yamamoto, that have had an especially significant influence on you and your career?
Since my grandmother was a koto (traditional Japanese 13-string zither) teacher, the sound of koto practice was always a part of daily life, and since my father and mother loved music too, I was surrounded by the sound of Western-style music including classical Western music as I was growing up. Also, my uncle was a jazz pianist, who taught me some things about the principles of jazz. Although it was before I began studying under him, I listened to an album of master Hozan performing with the jazz pianist Masahiko Sato and imitated some of it by ear. So, I believe that being able to watch master Hozan and his avant-garde musical activities from my middle school years was a very important experience for me.
During my middle school and high school years, I wanted to hear everything I could involving the shakuhachi, so whenever I saw the word shakuhachi on the TV schedule page of the newspaper or in FM radio magazines I would make sure to listen to the program. From the NHK (national broadcasting company) program “Contemporary Music” I developed an interest in contemporary music as well. I also went to performances and get there 30 minutes early so that I could be in line to get one of the best seats at the very front.
After high school you entered the traditional Japanese [ Hogaku ] music department of the Faculty of Music at the national Tokyo University of the Arts.
When I was in middle school, I went to the campus festival at Tokyo University of the Arts once and was deeply inspired by the occasion, with all types of music to be heard here and there around the campus, and that experience made me decide that this was the university I wanted to go to. My interest was tending toward contemporary music when I went to university, so I took a lot of courses of the type that students studying to become composers took. As a result, I was fortunate to become friends with people like Kyo Ichinose and Motoharu Kawashima who are now composers. I went on to graduate school at the university and then worked as a teaching assistant there, so I ended up being at Tokyo University of the Arts for eight years.
While I was at the university I organized a variety of live performances that eventually led to my making a debut as a performer. Among my first activities as a performer were making an album with a koto and performing at clubs. Since I knew a lot of koto music, I was valued as a collaborator and invited to perform in many places.

The spread of shakuhachi music in the world

Encounters with people give birth to new worlds of music

An era when traditional music is learned at universities 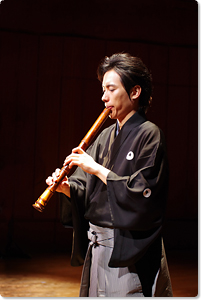 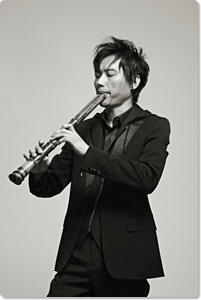