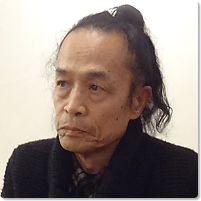 A look into the choreographic art of Akira Kasai, fifty years after entering the world of Butoh

Akira Kasai became active as a Butoh dancer after meeting Kazuo Ono in 1963 and Tatsumi Hijikata in 1964. By 1971, at the age of 28, he started his own studio Tenshikan (*1). From this studio would emerge Butoh artists Setsuko Yamada, Kota Yamazaki and others. In 1972, Kasai traveled to Germany and studied at the Eurythmy school in Stuttgart. After returning to Japan in 1985 he lectured on the anthroposophy of Rudolf Steiner and held performances and workshops on Eurythmy. In 1994, Kasai made his return to Japan’s dance world with a work titled Seraphita (*2), after which he continued to present not only his own solo pieces as well as choreographing pieces for such representative butoh artists of Japan’s contemporary dance scene as Kuniko Kisanuki, Kim Ito, Naoko Shirakawa and Ikuyo Kuroda, and also figures like the famed ballet dancer Farouk Ruzimatov. At the same time he has also performed actively overseas in places like North and South America, Europe and South Korea.
In 2012, Kasai worked with renowned butoh artist Akaji Maro (leader of Dairakudakan) for the first time to present Hayasasurahime , a work he choreographed for performance at Tokyo’s Setagaya Public Theatre (November 2012). Performing in this work along with Kasai and Maro were four dancers from their Tenshikan and Dairakudakan companies, and 20 Eurythmy members. The work superimposed stories from Japanese foundational mythology recorded in the Records of Ancient Matters on the music of Beethoven’s Ninth Symphony, with choreography that had the dancers from Tenshikan and Dairakudakan performing as embodiments of the universal dualisms of good and evil and Heaven and Earth. In their role, Kasai and Maro first battle each other, then become unified and finally become one as the embodiment of the deity Hayasasurahime that swallows up all dishonor and degradation and turns it into the light and darkness of the world’s creation.
Kasai has proven himself to be a unique figure of amazing and inexhaustible artistic creativity, working with equal ease in butoh, modern dance, contemporary dance and Eurythmy, as a butoh artist and choreographer. In this interview we ask Kasai anew about the foundations of his work and thought.
Interviewer: Tatsuro Ishii, dance critic

I would like to begin by asking about your recent work Hayasasurahime . The ancient text Records of Ancient Matters ( Kojiki ) the primary source of writings about the Japanese creation myths, and it has been translated into English as well. What gave you the idea to choose the little-known god Hayasasurahime appearing in the Records of Ancient Matters and choreographing a piece based on this god character using the music of Beethoven’s 9th Symphony?
The name Hayasasurahime doesn’t actually appear directly in the Records of Ancient Matters, but is mentioned indirectly as one of the “ Haraedo ” deities in the passage, “Izanagi no Mikoto went to Awagihara by the river-mouth of Tachibana of Himuka in Tsukushi and performed a purification ceremony, where he produced various gods.” Hayasasurahime is one of the “various gods” ( Haraedo no Ookami ) mentioned here. The first of these gods produced in the purification ceremony is given the name Seoritsuhime, the second is Hayaakitsuhime, the third is Ibukidonushi and the fourth is Hayasasurahime.
This deity is similar to Amenouzume , the deity that is generally considered the founding deity of Japanese dance. If Amenouzume is said to be the deity that dances to change darkness to light, I believe that Hayasasurahime is a primordial deity that brings both darkness and light together is a state of pre-foundational chaos.

I believe that the image is close to that of the orgiastic rites of Dionysus or Bacchus in the European mythological tradition, where everyone drinks and dances themselves into state of catharsis.
In the choreographic theme of your work Hayasasurahime this time, I certainly felt a bacchanal element. What’s more, I also felt great appeal in the intellectual bearing of the composition that suggested an apollonian aspect as well. However, despite that, the choreography didn’t appear to be something you created in a calculated way. Rather, it had the appearance of choreography that created itself freely.

*1
Tenshikan is the name of a studio Kasai opened in 1971. The name means the building of angles and it is taken from the famous Castle Sant’Angelo in Rome. Kasai chose it as the name for a studio for study of techniques for approaching the human body because of its namesake’s history as an old prison that became a museum for art of Manierisme.

*2
The performance of the work Seraphita – Kagami no Seiki wo Motsu Watashi no Onna at the Nakano Zero Hall in January 1994 was Kasai’s first butoh performance in 15 years. Among the performers were former Tenshikan members Setsuko Yamada and Josaku Sugita. It was a mysterious work in which Kasai exuded a hermaphroditic aspect with great appeal for the fans who had long been awaiting his return to the dance world. 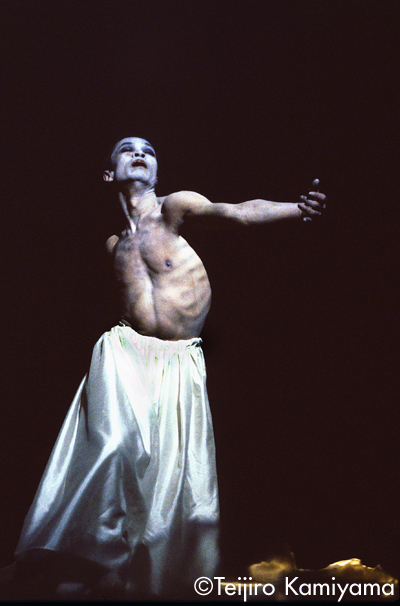 *3
Kafun Kakumei (Pollen Revolution) is a representative solo piece in Kasai’s oeuvre. It premiered in 2002 as a work in the solo dance series of Theatre Tram (Setagaya Public Theatre, Tokyo) and has since toured to several dozen cities around the world. Wearing the headpiece and kimono of the famous Kabuki role Musume Dojoji role, he dances to part of a woman falling into a state of love madness. 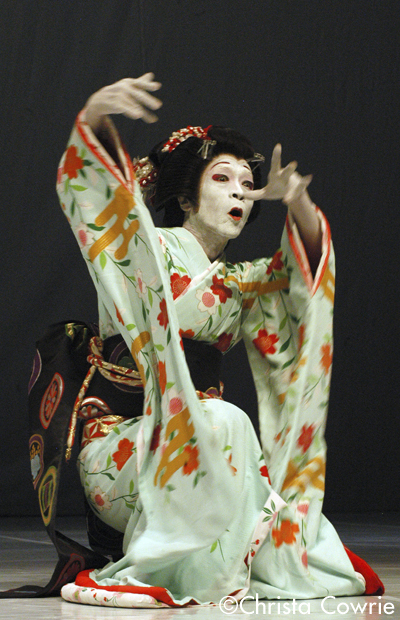 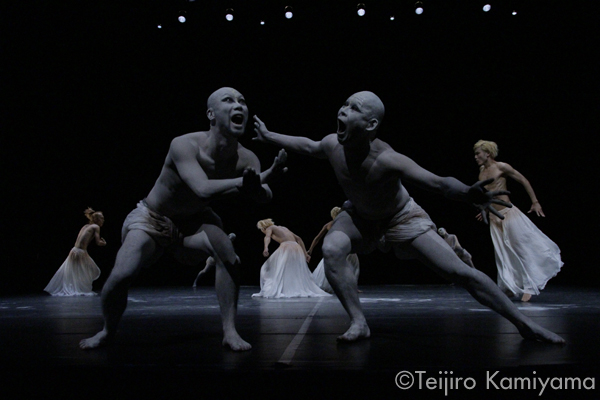 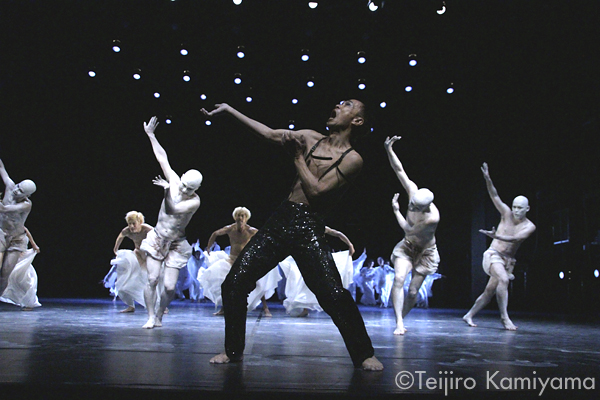 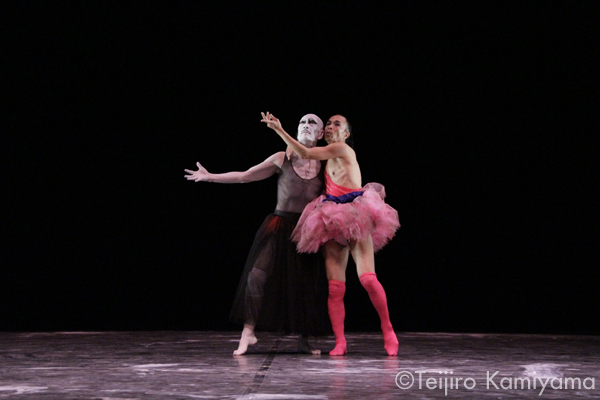 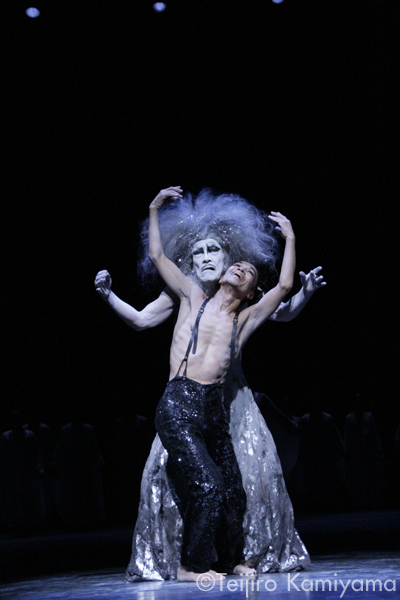 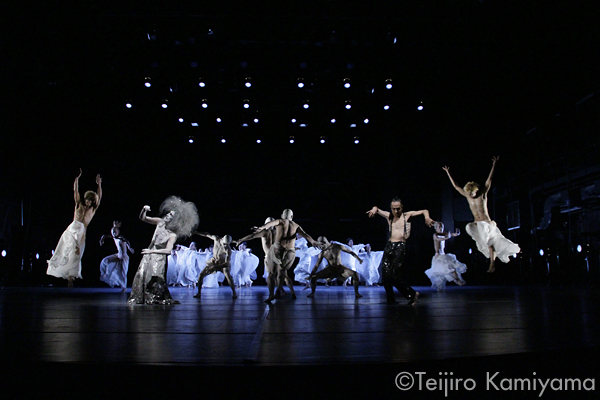