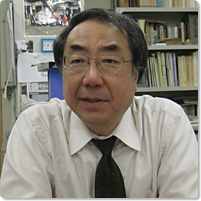 Before the advent of modern theater facilities, the common venue for performing plays in Japan was a traditional wooden building with a stage known as a shibaigoya , or “playhouse.” The oldest extant example of the traditional shibaigoya playhouse is the Old Konpira Kabuki Theater ( Kyu Konpira Ooshibai ) (built 1835) in Kotohira-cho, Kagawa Prefecture. This is a theater complete with the stage mechanisms used in Kabuki performances in the Edo Period (1608 – 1867). Many similar shibaigoya playhouses were built during the ensuing Meiji (1868 – 1912) and Taisho (1912 – 1926) periods that served not only as theater houses but also as popular venues for a variety of different types of events and performances where people gathered. With the changing times, however, most of these playhouses were eventually torn down. Others survived by being converted to warehouses or undergoing renovations as the buildings aged, leaving about 30 of these traditional playhouses extant today around the country. Of these, five are designated as National Treasures or Important Cultural Properties by the Japanese government. Kako Tadayoshi of the Japanese Association for Conservation of Architectural Monuments (JACAM), a public-interest organization specializing in the restoration of buildings of National Treasure or Important Cultural Property status, has headed the projects to restore two of the most important traditional playhouses, the Yachiyoza and the Old Konpira Kabuki Theater. We spoke with Mr. Kako about the world-leading wooden building restoration technology applied in these projects and the appeal of the old playhouses.
Interviewer: Kazumi Narabe, journalist

Origins of the shibaigoya playhouses

Dismantling and restoration of Yachiyoza

The public-service organization, Japanese Association for Conservation of Architectural MonumentsFounded in 1971. In 1976 it was designated as a select organization for the preservation of technology for “Building Restoration” and “Building Carpentry.” In addition to conducting restoration of buildings of National treasure and Important Cultural Asset status, the Association engages in surveys of historically important buildings, assessments of earthquake resistance of structures of cultural asset status, formulating plans for the preservation and use of such buildings and training of technicians to work in this field. The Association has also engaged in international cooperation projects such as planning the restoration of the World Heritage site Candi Prambanan (Prambanan Temple Compounds) in Indonesia following the Central Java Earthquake. As of April 2010 that Association has a staff of 97 people. Through restoration work, the Association transfers restoration technology for cultural assets to local construction companies and contractors.
http://www.bunkenkyo.or.jp/

Shibaigoya playhouses
Shibaigoya are playhouses for the performance of play that are built in the traditional Japanese style. Designated as Important Cultural Asset, the Old Konpira Kabuki Theater (common name: Kanamaruza) built in 1835 Kotohira-cho, Kagawa Prefecture is said to be the oldest extant playhouse built in the Edo-period style with the stage equipment of the period. Playhouses of this type have audience seating consisting of masu-seki (a flat central ground-floor area of chessboard-like square seating areas with grass “ goza ” matting on wooden flooring), takadoma (an area of seating surrounding the masu-seki area at a slightly higher level) and the more expensive 2nd-floor sajiki-seki . There are also stage devices including a hanamichi runway extending from the back of the audience area to the stage for actor entrances, an overhead scaffolding called a budodana (a gridiron made of bamboo) above the stage and extending out over the audience seating area which stagehands can climb out on to drop showers of paper “cherry blossom petals,” and a circular revolving stage. Construction of this type of Edo-period playhouse continued throughout the country into the Meiji Period.
These playhouses were not intended only as theaters for Kabuki performances but served as comprehensive culture centers for events such as music concerts and town meetings by political figures. However, the big changes in lifestyles and tastes in entertainment among the Japanese after World War II, brought a decline in business for traditional playhouses. As traditional storytelling, music and theater lost popularity, many playhouses converted their seating areas into rows of benches and were operated as movie theaters. But the period of commercial revival brought by movies soon ended with the emergence of television and many playhouses were closed down and eventually demolished or turned into warehouses.
Today, only about 30 playhouses remain. With the success of the “Konpira Kabuki” performances by popular Kabuki actors in 1985 at the Old Konpira Kabuki Theater, citizen movements to restore old playhouses and make them usable again as theaters for performances have begun around the country. Since then, the Yachiyoza built in Yamaga city, Kumamoto Prefecture in 1910 financed by a stock issuing by local merchants and the Korakukan built in the same year as an entertainment center for the mine workers of the town of Kosaka in Akita Prefecture have been designated as Important Cultural Assets. Other playhouses still in use today are the Uchikoza built in Uchiko-cho, Ehime Prefecture in 1916 by local leaders and the Kaho-gekijo restored in the Showa Period in the city of Izuka in Fukuoka Prefecture. These and other cities with old playhouses have joined to form the National Shibaigoya Conference ( Zenkoku Shibaigoya Kaigi ) to promote preservation and use of these buildings. 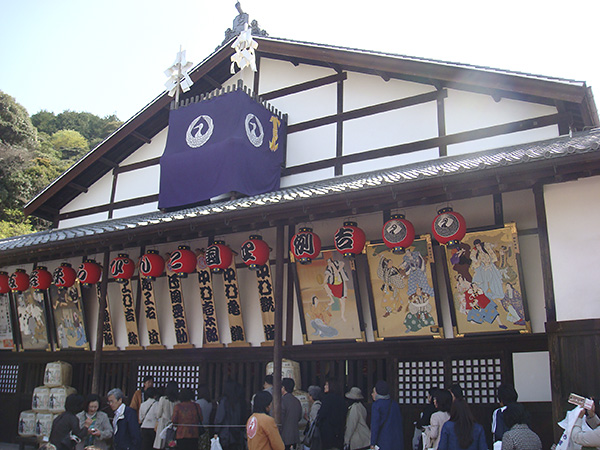 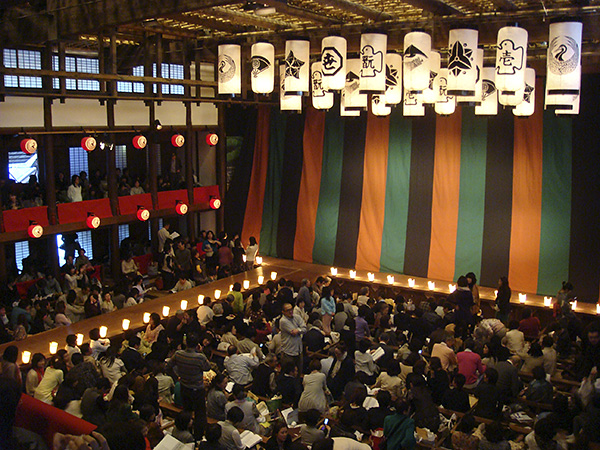 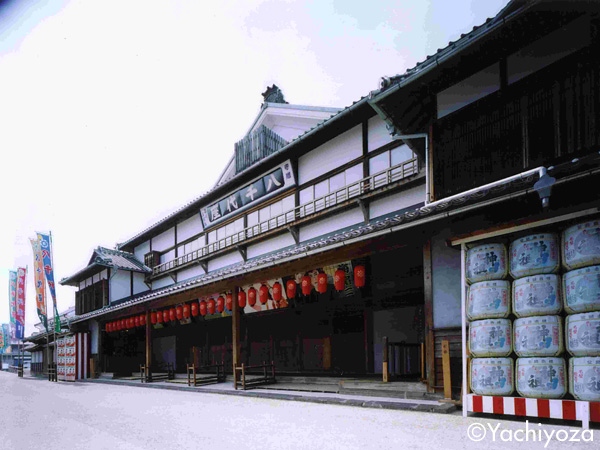 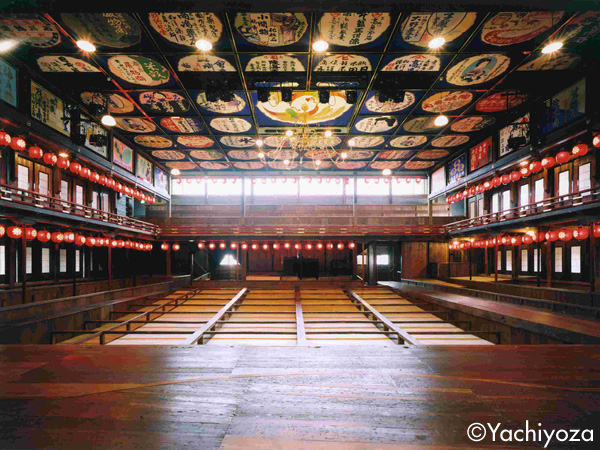