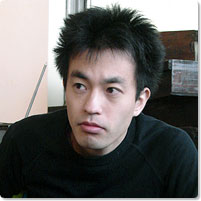 Winner of the 52nd (2008) Kishida Drama Award, Shiro Maeda, was born in 1977. He has been the voice of children born in an age of plenty, those who have never wanted for anything. Using what is known in Japanese as datsuryoku-kei , or a manner of speaking that is devoid of energy, Maeda has succeeded in capturing the values and lifestyles of a generation unfettered by the burden of finding meaning in life. His characters include a man who can’t stop urinating out of sadness for a lost love, another who throws away his memories and abandons himself, and yet another who shows up on the step of an old lover, moves in and continues a hand-to-mouth existence with her. Audiences of Maeda’s generation enjoy his plots brimming with the delusions of his main characters and the small adventures they have in order to get by in life. We interviewed Maeda in his drama company’s studio, a remodeled his father’s factory. Maeda appeared looking as carefree as his characters, volunteering episodes from his own life as he talked about the theatrical world.
Interviewer: Akihiko Senda

Shiro Maeda
Maeda was born in Gotanda, Tokyo, and graduated from Wako University. He formed the Gotandadan theater company in 1997 at the age of nineteen. The charm of his work lies in its naturally laid-back and amusing humor within a theatrical space. His plays Iya, mushiro wasurete-gusa (More a Forget-Me than a Forget-Me-Not), Kyabetsu no tagui (A Type of Cabbage), and Sayonara boku no chiisana meisei (Farewell, My Moment of Fame) were short-listed for the 49th, 50th, and 51st Kishida Drama Awards respectively. In 2007, he won the Kishida Drama Award for Ikiterumono wa inainoka (No One Alive Here?) This is a lyrical and humorous piece depicting death that grew out of a workshop involving the 17 actors who were selected from auditions, and for reasons never explained, all the characters die. It has been acclaimed as strict yet fresh theater of the absurd. Many of his short stories have been published in literary magazines, and several of his novels have been nominated for major literary awards, including Ai demo nai, seishun demo nai, tabi datanai (Not Really Love, Nor Youth, Nor a Trip) for the 27th Noma New Literary Writers Prize, Renai no kaitai to Kita-ku no metsubo (Splitting Up, and the Collapse of Kita Ward) for the 28th Noma New Literary Writers Prize and the 19th Mishima Prize, and Gureto seikatsu adobencha (The Great Life Adventure) for the 137th Akutagawa Prize.

Gotandadan
Nagaku toiki
(A Long Exhale)
Premier: 2003
Plot:
Two colleagues are walking home from a drinking party after work, talking about nothing in particular. One of them mentions that he has recently been dumped by his girlfriend, and he turns to a fence on the side of the road and begins to pee. The pee begins dripping off the fence and onto the road (floor), but shows no signs of stopping. Passersby watch with curiosity—a grown man urinating in public, and the man himself becomes more and more uneasy when he can’t stop. Eventually his friend, who just happens to pass by and have brought a long a video camera, takes it out to record the event, when who should happen along but the peeing man’s ex…. 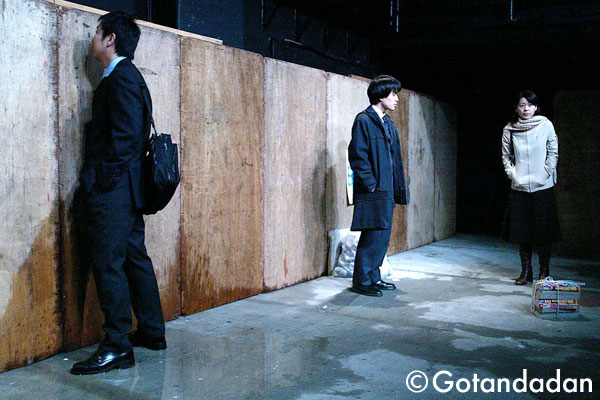 Gotandadan
Kyabetsu no tagui
(A Type of Cabbage)
Premier: 2005
Plot:
A man’s memory has been taken out and transplanted into a cabbage. His wife has a worm in her head and is gradually losing her memory. A god wearing a short coat turns up. The man asks the god to get rid of the worm in his wife’s head, but the process goes disastrously wrong. The wife swells up to the size of the earth and can no longer be seen. The man now inside his wife hears her voice calling from outside. It is his memory taking in his wife’s memory, that is, the voice of the cabbageworm living inside the cabbage. Upon hearing his wife’s farewell, the weeping man begins peeling away the cabbage leaves.

Gotandadan
Idainaru seikatsu no boken
(The Great Life Adventure)
Premier: 2008
Plot:
Bedding is spread out in a room, and a man and a woman are sprawled out on top of it. The two are apparently ex-lovers, but the man is living with the woman, leading a life of seclusion. His only apparent goal is to win a videogame. Every once in a while, someone who appears to be a friend visits, and they have rambling conversations or play videogames. The man’s dead sister appears… perhaps he is having a dream. The woman he lives with orders him to leave. But the man doesn’t budge. In a way, it might even be considered positive…a “great life adventure, ” the way he continues to live his life doing absolutely nothing. 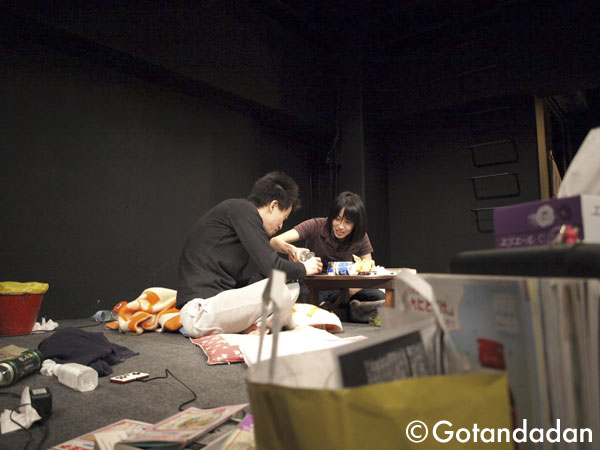 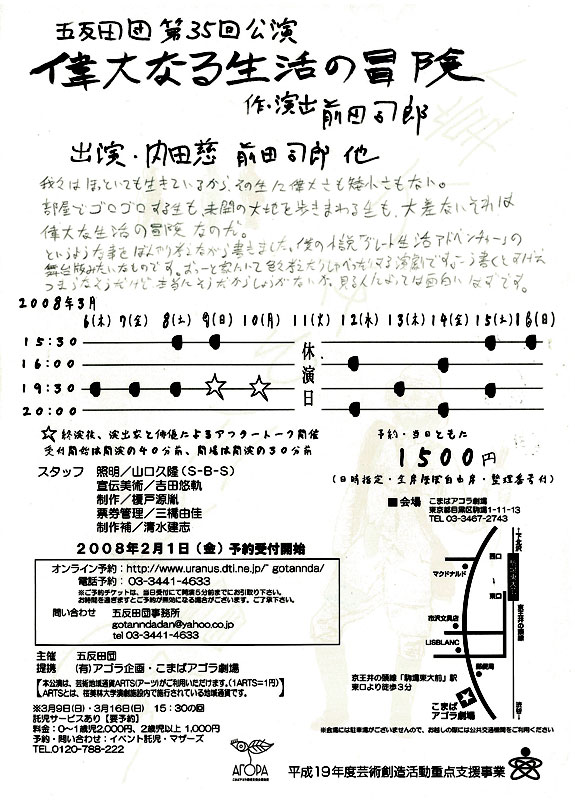 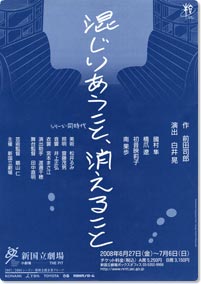 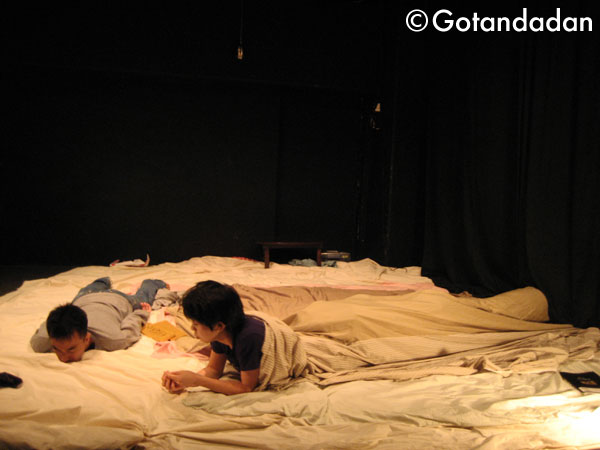 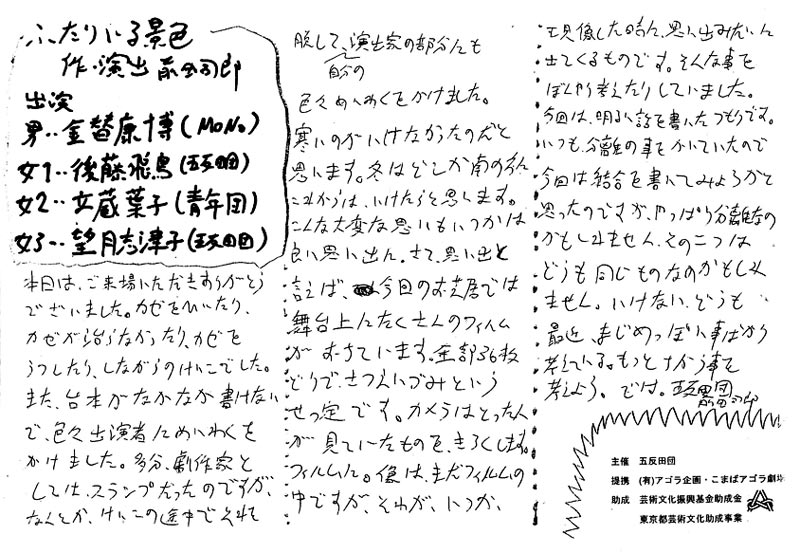 Gotandadan production
Sayonara Boku no Chiisana Meisei
(Farewell, My Moment of Fame)
(Oct. 27 – Nov. 5, 2006 at Komaba Agora Theatre)
Synopsis:
A playwright calling himself “I” ( boku ) decides to donate one of the Kishida Drama Awards presented to him by his girlfriend to a poor country. While he is away, a snake living in his room swells up as it tries to swallow the girlfriend, the entire world, and by extension the play itself. These two symbolic episodes gradually converge arbitrarily to create a dreamlike rambling story. The author’s own experience of having twice been nominated for but failing to win the Kishida Drama Award also becomes a motif.