Kazuyoshi Kushida has won acclaim recently for his work with Kanzaburo Nakamura XVIII directing the “Heisei Nakamura-za” and productions of the Bunkamura Theater Cocoon Kabuki series. Kushida has been a leader among the first generation of Japan’s “small theater movement” for 30 years. In this interview we talk with this pioneer among theater artistic directors who has continued to be a commanding presence through the decades with his highly-developed theatrical sensibility and his exceptional ability to develop a rapport with the audience.
Interviewer: Akihiko Senda

Kazuyoshi Kushida
Born in 1942, Kazuyoshi Kushida is an actor and director. After studying in the Haiyu-za actor’s school, he joined the Bungaku-za theater company in 1965. The following year he joined with Makoto Sato, Ren Saito and Hideko Yoshida to form the company Jiyu Gekijo that would use the Underground Theater Jiyu Gekijo as its performance base. In 1975 the name was changed to On-Theater Jiyu Gekijo and Kushida continued to present a series of popular productions, such as Maboroshi no Suizokukan (1976) and Motto Naite-yo Flapper (1977) (written and directed by Kushida) and directing Ren Saito’s Shanghai Rhapsody ( Shanghai Bansking ) (1979) and Cusco (1982). From 1985 he began working in preparation for the opening of the Bunkamura Theater Cocoon from the architectural planning stage in the capacity of artistic director. With the opening of the theater in 1989, he signed a franchise agreement with On-Theater Jiyu Gekijo, which he also led, and introduced a repertoire system. Since then he has worked actively on behalf of Theater Cocoon, bringing such programs as an annual production of A Midsummer Night’s Dream directed by different directors each year and initiating the “Cocoon Kabuki” series in collaboration with Kanzaburo Nakamura XVIII. The “Cocoon Kabuki” remains a popular ongoing series today. At the conclusion of his term as artistic director of Theater Cocoon in 1996, Kushida also dissolved the company On-Theater Jiyu Gekijo. Since 2000, he has served as a professor of the Arts Dept, of Nihon University, and since April 2003 he has served as artistic and administrative director of the Matsumoto Performing Arts Centre. In 2006, he won the Outstanding Director Award of the 14th Yomiuri Drama Grand Prix for Tokaido Yotsuya Kaidan–Kita version , the seventh production of the Cocoon Kabuki series.

Cocoon Kabuki
This is a series of Kabuki productions mounted at a pace of about one a year at the Bunkamura Theater Cocoon in the Shibuya district of Tokyo. The series began with the cooperation of Kazuyoshi Kushida and other in 1994 out of the desire of Kanzaburo Nakamura XVIII to bring Kabuki performances to a younger audience in the young culture center of Shibuya. The series is known for its innovative productions of Kabuki full of new ideas and bringing together the Kabuki actors and musicians led by Kanzaburo, the contemporary theater actor Takashi Sasano and the electronic music performer Naoyuki Asahina. The Kabuki plays performed in this series until now include Tokaido Yotsuya Kwaidan , Natsumatsuri Naniwakagami , Kamikakete Sangotaisetsu , Sannin Kichisa and Sakurahime . The series increases the number of Kabuki fans with every production.

Heisei Nakamuraza
This is a project initiated in 2000 by Kanzaburo Nakamura XVIII that uses temporary outdoor theaters in an attempt to recreate in the present Heisei Period the kind of atmosphere of the small, intimate Kabuki theaters of old like the Nakamura-za of the Edo Period. Until now this series has presented traditional Kabuki play including Yoshitsune Senbonzakura , Kagamiyama Gonichi no Iwafuji , Benten Musume Meo no Shiranami , Honcho Nijushiko , Ninjobanashi Bunshichi Mottoi and Hokaibo , all in contemporary versions directed by the contemporary theater director Kazuyoshi Kushida. The first overseas performance of this series was held in a temporary outdoor theater set up in the square in front of the Lincoln Center in New York in 2004, recreating the same facility that had been used for the in a Tokyo performance on the banks of the Sumida River. More Heisei Nakamura-za performances are scheduled for New York in 2007 and Europe in 2008.

Bunkamura
Bunkamura is a comprehensive private-sector culture facility run by the Tokyu Group that opened in 1989. Located in the popular Shibuya center of Tokyo, the facility has a 2150-seat Orchard Hall, the 747-seat Theater Cocoon, an art gallery and movie theater, and it continues to be a center for the production and performance of new works in the performing arts. Kazuyoshi Kushida was the first artistic director (1989-96). The present artistic director is Yukio Ninagawa, making Theater Cocoon the venue for the premieres of Ninagawa’s new works, as well as being the venue for works by various other leading playwrights and directors from Japan’s theater scene. In this capacity, it is often the site of noted productions cast with leading actors from the movie and television world.
http://www.bunkamura.co.jp/

Shouchiku
Shochiku is a private sector entertainment company established in 1895 and involved today in the distribution of movies and production and marketing of Kabuki as well as “New Theater” and “Shochiku New Comedy” plays. The head offices are in Chuo-ku, Tokyo. It operates theaters including the Kabuki-za and the Shinbashi Enbujo in Tokyo and the Osaka Shochiku-za.

Jokyo gekijo
This is a theater company started by Juro Kara in 1963. From 1967 the company mounted outdoor tent productions around the country under the name “Aka Tent” (Red Tent), beginning with the 1967 performance at the Shinjuku Hanazono Shrine. In these activities, the company led the first generation of underground small-theater drama. The company disbanded in 1988 and succeeded by the present company “Kara-gumi.”

Kamikakete Sangotaisetsu
A play written by Tsuruya Namboku IV. It premiered at the Edo Nakamura-za in 1825. It is a story that is highlighted by a dramatic murder scene resulting from the passionate contest between two characters for the love of a Fukagawa geisha . It was performed for the third Cocoon Kabuki production in 1998.

Natsumatsuri Naniwakagami
This is a play written jointly by Namiki Senryu, Miyoshi Shoraku and Takeda Koizumo. It premiered at the Takemoto-za in Osaka in 1745. It is the story a man named Danshichi who has just gotten out of prison, and in order to prove his loyalty to his master, he becomes involved in a battle to the death with his father-in-law. It is full of images from the summer festivals of the Naniwa district of old Osaka. It was performed for the second Cocoon Kabuki production in 1996 and the fifth in 2003. It was also performed in the 2004 Heisei Nakamura-za production in New York.

Sannin Kichisa
A sewamono (genre) play written by Kawatake Mokuami. It premiered at the Edo Ichimura-za in 1860. It is a story of inter-tangled human relationships as three thieves going by the name of Kichisa and their fathers fight over a purse of 100-ryo money and a famous short-sword named Koshinmaru. It was performed for the fourth Cocoon Kabuki production in 2001 and the eighth in 2007.

Tokaido Yotsuya Kwaidan
This is a “sewamono” (genre) play of the Kabuki repertoire written by Tsuruya Namboku IV. It premiered at the Edo Nakamura-za in 1825. Based on the historical Chushingura story, it tells a tale of horrible obsession of the ghost of the woman Oiwa. It is known as the masterpiece of the Kyogen horror story genre with many dramatic scenes. It was performed for the first Cocoon Kabuki production in 1994 and the seventh in 2006.

Hokaibou
A sewamono (genre) play adapted by Nagawa Shimesuke from the original story Sumidagawa Gonichi no Omokage . Rare among the plays of the Kabuki repertoire, this play takes the form of a comedy, telling the story of a beggar priest named Hokaibo who works a series of mischievous deeds against the backdrop of a samurai family crisis involving the whereabouts of a scroll painting entrusted to the house by the Imperial court and the marriage of the family’s daughter. The fate of Hokaibo is depicted with a comical touch even as he is eventually killed, and as the final scene he returns as a ghost and performs a magnificent dance. Being set in the Sumida River area of old Edo (present Tokyo), this play was chosen to open the first Heisei Nakamura-za Kabuki production in an outdoor temporary theater set up by the Sumida River. It will be performed in New York in the summer of 2007.

Sakurahime
A play written by Tsuruya Namboku IV. It premiered in 1817 under the title Sakurahime Azumabunsho . The daughter of an upper class family, Sakurahime is raped by the servant Gonsuke. Her womanly instincts awakened by the incident, she gives up her life of privilege to marry Gonsuke and ends up sinking to the life of a prostitute. It was performed for the sixth Cocoon Kabuki production in 2005.

Matsumoto Art Center
Opened in 2004, Matsumoto Performing Arts Centre is an arts and culture facility run by Matsumoto City, Nagano Pref. The administrative and artistic director is the actor and director Kazuyoshi Kushida. The facilities include a horseshoe type main hall (1800 seats), a small hall (288 seats) and a roll-back type experimental theater (360-seat capacity). The architectural design is by the famous Japanese architect Toyoo Ito. The facility serves as one of the main venues for the international classical music Saito Kinen Festival Matsumoto.
http://www.mpac.jp/index.html 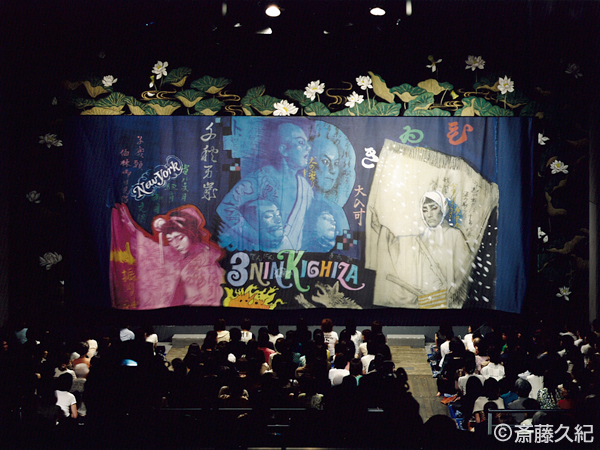 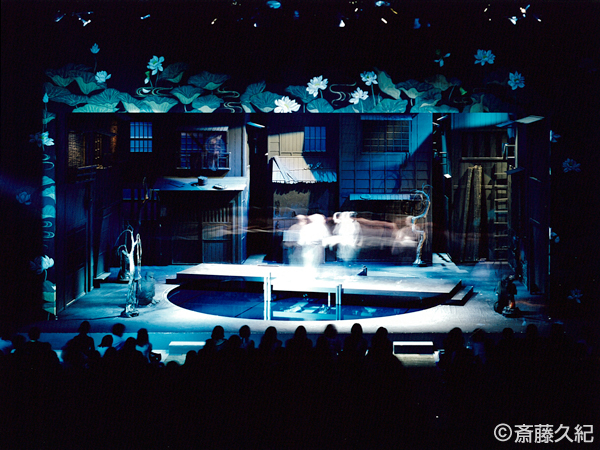 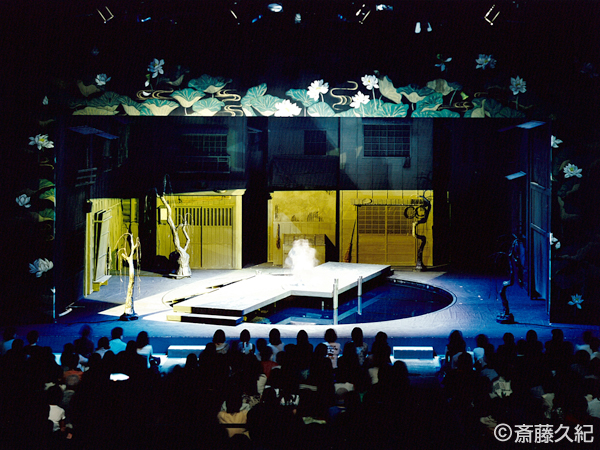 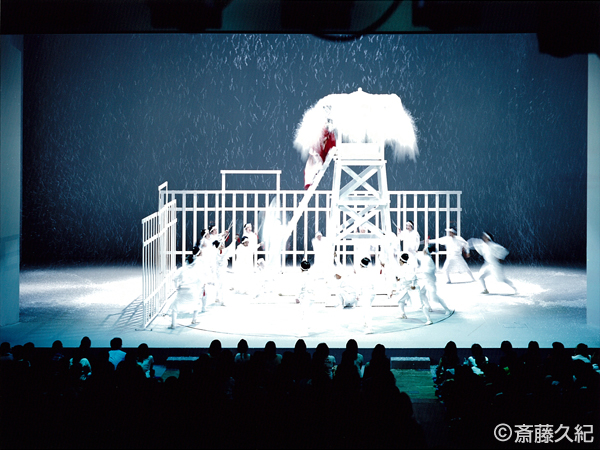 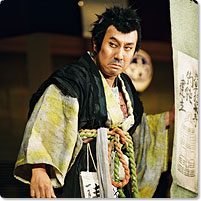 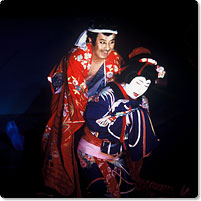 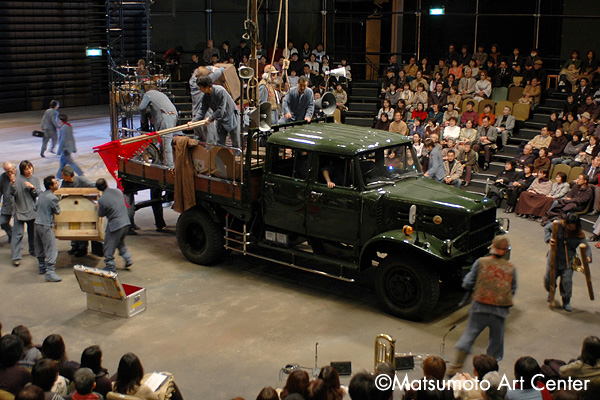 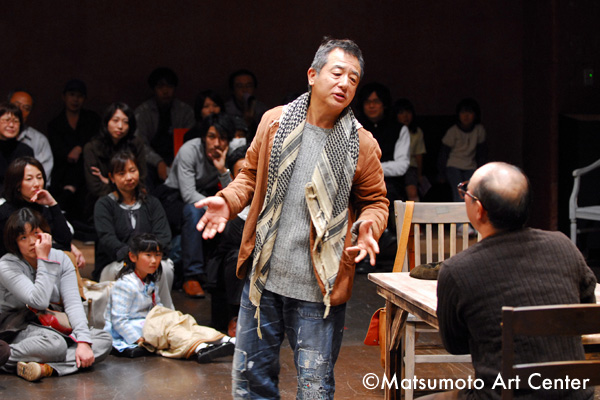