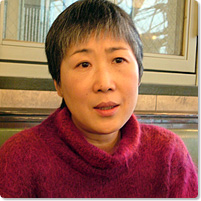 Ai Nagai is a playwright and director who creates plays that deal with contemporary themes in the context of daily life with a comical touch. Her artistic activities have especially attracted attention since the 1994 start of her “Postwar Life Drama Trilogy” (*) of plays dealing with the rapidly changing values of Japan’s postwar years in a home comedy format that has won her a number of major awards. In the wake of her winning the 2005 Asahi Drama Awards Grand Prize for her play Utawasetai Otoko-tachi (Men Who Want to Make Us Sing), which deals with the problem of mandatory singing of the national anthem in the setting of a public school, we spoke with Nagai about her works.
Interviewer: Roger Pulvers

NAGAI, Ai
Ai Nagai is playwright, director and leader of the theater company Nitosha. She graduated from the Toho Gakuen College of Drama and Music with a major in theater. She is one of the most sought-after playwrights in Japan today for her “Well-made Play” that treats social issues from a critical perspective. Nagai presently serves as the President of the Japan Playwrights Association.Nitosha was founded in 1981 by Nagai and her fellow theater artist, Shizuka Oishi, as a two-woman theater company. Both being born in the Year of the Rabbit, they named their company Nitosha (meaning a company of two rabbits). They took turns writing plays for the company’s productions, while also acting in them. From 1983, Nagai assumed the role of director for these productions. In 1991, Oishi left the company to concentrate on scriptwriting, after which Nitosha became a production company for Nagai’s plays directed by Nagai herself. These activities continue to this day. Nagai’s plays have won a strong reputation for their outstanding story development, the interesting characters she creates, the witty lines and contemporary themes. Particular acclaim has been won by her “Sengo Seikatsushi-geki Sanbusaku” (Postwar Life History Play Triology) which began in 1994 as a series of plays that tells the stories of groups of characters whose daily private lives reflect the changing times. Her plays Miyo, Hikoki no Takaku Toberu wo and Ra Nuki no Satsui, written for the Seinen-za company and Theatre Echo respectively have also won critical acclaim. And, the Nitosha production of her play Ani Kaeru was awarded the 44th Kishida Kunio Drama Award (sponsored by Hakusui-sha) in 1999. Expectations are high for Nagai’s continued contributions to Japanese theater.

Toki no Monooki
(Time’s Storeroom) (1994)
A proud family being changed by the pragmatism of Japan’s era of high economic growth rate.

1961, even though the heat of the Japan-U.S. Security Treaty conflict remained, Japan was entering its era of rapid growth of the economy, when the government was promoting a program to double per capita income, a leisure boom was raging and families were hoping to bring home the big three consumer items: a TV, an automatic washing machine and a refrigerator. The country was also looking forward to hosting the Olympics three years later. The “poor but proud” Shinjo family doesn’t have a television yet. But, the mysterious woman Tsuruko who rents a vacant room in the Shinjo house receives a television and that leads to frequent visits by people from the neighborhood. The wife of the Shinjo house, grandma Nobu is deeply concerned. There was surely a reason why the daughter Tokiko and her husband sent Tsuruko a televison. The son of the family, Mitsuyo teaches middle school while writing novels. The grandson, Hidehoshi, is a college student who has decided to run for president of the local community association. The granddaughter Kasumi wants to be a Shingeki actress. The living room of the Shinjo house harbors memories of times that none of them can forget.

Papa no Democracy (Papa’s Democracy)
(1995)
Defining the Japanese of the Postwar Era” in a depiction of the confusion brought on by the sudden change from militarism to democracy.

The setting is Tokyo in 1946, just after the end of World War II. The priest of a Shinto shrine, Tadanobu Kinouchi, is being criticized as having been a running dog of the militarists and is therefore woefully out of place in the new age of democracy. His eldest son is being held in a Soviet labor camp in Siberia and in these times when food is scarce he has to support his son’s wife, Fuyu, his second son, Nobukiyo, and a live-in freeloader named Motohashi (former special political police officer). To add to his troubles a former member of the Women’s Association for the National Defense now turned democratic activist, Midorikawa, shows up demanding that he take in seven people who lost their homes during the war. Among them is an assistant director from the Toho film studio named Yokokura who is deeply involved in the debate about what democracy is and frequently gets into fights about it with Tadanobu. Fuyu becomes completely absorbed in Yokokura’s activism and begins organizing strikes to improve labor conditions. To this, an adopted son, Chiyokichi, returns from the war. Fuyu tries to get the weak-willed Chiyokichi to get involved in her activist movement by preaching to him about democracy, but ….

“Postwar Life History Play Triology
Boku no Tokyo Nikki
(My Tokyo Diary)
(1996)
A “cat crisis” in an apartment house in the closing days of the young people’s era of rebellion.

The setting is Tokyo in 1971. Even though the college student Mitsuo Harada’s home is in Tokyo, he has deliberately chosen to live in a small 4 1/2 mat room in an apartment house. Although he couldn’t really participate whole-heartedly in the often violent student demonstrations of the last few years, at least he felt that he had to move out from under the roof and support of his parents. By working at part-time jobs to support himself, he was determined at least to shake the image of a pampered son of a well-to-do family ( obottchan ). But at this apartment, Mitsuo gets to know Noriko, who lives with the New-Left activist Ide, and she gets him involved in a bomb plot. Meanwhile, he also has to deal with the other people in the apartment house, like a cat-hating salaried worker and a cat-loving woman who are engaged in an ongoing feud and a group of hippies trying to start a Love & Peace commune. Although it was independence that Mitsuo had sought, this apartment is throwing his life into deeper and deeper confusion.